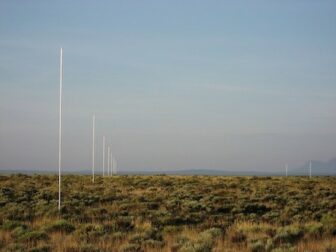 Since 2008, the Nevada Museum of Art, in Reno, has convened its Art + Environment Conference, a forum for wide-ranging conversation about how art can help us better understand humans’ place in the natural world. This year’s conference went on earlier this month, and writer and artist Aaron Rothman was in attendance. He’s sharing a series of reports and reflections from the conference, the last of which is below.

At one point during my time at the Nevada Museum, I listened to Kenneth Baker, long-time art critic for the San Francisco Chronicle, describe the experience of visiting Lightening Field, Walter de Maria’s famous one-mile by one-kilometer grid of stainless steel poles in the New Mexico desert. According to Baker, these tall, thin, widely spaced poles, glowing bright in the last light of sunset, dominate the vast landscape, expressing “a world determined to see technology to the end of the road.” Lightening Field was completed in 1977, and nuclear weaponry was the technology that Baker alluded to. Nuclear annihilation has receded—to some degree, for the time being—as an imminent threat, but we still seem determined to let other twentieth century technologies run their full course. The mounting consequences of this course of action—climate change and other realities of late capitalism—hung over the proceedings in Reno.

“No one in this room believes in climate change,” stated Edward Morris, as he presented the Canary Project, his collaborative work with Susannah Sayler. He wasn’t accusing us of being global warming deniers, but emphasizing the fact that we are not biologically adapted to internalize and react to diffuse, incremental threats. To really believe in climate change—for it to penetrate our cognition deeply enough to activate our survival instinct—requires us to feel its existence, not just know it in an abstract, intellectualized way. Underlying everything presented at A+E was a desire to make us feel the reality of our circumstances, to help us believe.

Of course, this is easier said than done, and there were a range of approaches on view in Reno, driven by varying goals and expectations. The most straightforward of these was by practitioners using art and design to process and convey complex information. As a demonstration of virtuoso data visualization, it was hard to beat the online map of U.S. wind patterns shown by Fernanda Viégas and Martin Wattenberg, leaders of Google’s Big Picture Visualization Research Group. Fed by real-time wind speed data, their map is instantly and intuitively understandable.

The well-known designer and artist Maya Lin also presented a web-based project using visual strategies to convey complex information. What Is Missing? is a website complemented by various sculptural installations and related initiatives addressing the disappearance of species around the world. Lin calls the ongoing project a digital memorial, though I understood it more as a call to action and an educational resource, rich and visually stunning. Many of the artists at A+E blend art making with research, activism, and social outreach, the most seasoned of whom were Newton and Helen Mayer Harrison. The Harrisons spoke with Lauren Bon of Metabolic Studio about their current collaboration, Rose, Coalition of Watersheds—a proposal for a new country in the Intermountain West devoted to ecological rebalance, with boundaries drawn around major watersheds. Re-envisionings like this can radically reshape our sense of possibility, they explained, revealing alternate ways of shaping our material future, whether or not they can be realistically implemented.

The artists working in this vein see their work as a form of serious, practical research. Indeed, Lauren Bon took offense at the notion of Rose as a utopian thought experiment, saying, “what’s utopian is the idea that the current way we live has a future.” The artistic process is a mode of inquiry that encourages finding unexpected connections and new ways of understanding. And art is particularly suited for wading into the tangled social and political waters that complicate seemingly material issues, such as climate change.

In Reno, I spoke with Faerthen Felix, a scientist who manages a field research station near Lake Tahoe that has partnered with the Harrisons on a project creating a sustainable, post-global-warming vegetative cover for the Sierras. Felix told me that the Harrisons’ experiments at her station have potential as science, but she seemed most excited by their ability to convey information and bring people into conversation around complex and contentious issues. A fascinating panel presentation focused on a set of paintings on display at the museum that explore the cultural history and recent environmental degradation of a lake in the Paruku region of Australia’s Western Desert. (Unfortunately, the indigenous artist who was scheduled to be in Reno could not make the trip.) The Paruku Aboriginal community does not have its own tradition of painting, but chose to work with non-indigenous artists and scientists on this project to communicate their history and experience to outsiders. John Carty, a researcher at Australian National University, explained to me that the community picked painting over written language as the medium to document and translate their stories because it allowed them to reveal certain things to outsiders while also concealing aspects of their cultural life they wished to keep secret. Total communication is not always desirable.

In general, I found myself drawn to the projects at A+E that most embraced art’s ambiguity and open-endedness. David Brooks is an artist with a long history of working in the field with biologists—the true avant-garde thinkers of our time, he said—helping do things like count and tag fish species. This work informs, but is separate from, his art practice. The projects he presented were ecologically themed, but lacked an obvious agenda. One consisted of a menagerie of life-sized, cast- concrete sculptures of animals stampeding through a pristine, white-walled gallery. Prior to exhibiting them, however, Brooks placed the sculptures in a Florida bird sanctuary until they were crusted with guano. With the scent of guano saturating the gallery, the installation—I imagine, having only seen images of it and not smelled it—viscerally drives home the reality and physicality of the natural world.

Aaron Rothman is a Phoenix-based artist and writer whose work explores contemporary issues in landscape. He’s photo editor at Places Journal, where he writes essays and curates art and photography features on landscape, architecture, and urbanism. He attended the 2014 Art + Environment Conference with support from the Arizona Commission on the Arts.