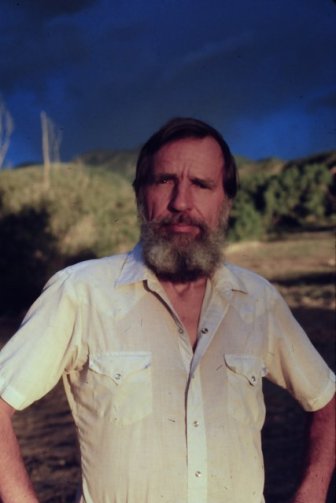 The legendary writer, troublemaker, and lover of Western landscapes, Edward Abbey, is the subject of David Gessner’s piece in the Lay of the Land section of the January/February 2015 issue of Orion. Gessner’s forthcoming book about Abbey, Wallace Stegner, and the American West is due out in spring.


Early on when I was writing my book about Wallace Stegner and Edward Abbey, I e-mailed a fairly famous writer friend of Abbey’s, asking for an interview while I was out West.

“I am not into hero worship,” he wrote back.

I understood this response. Too much of the writing I’d read about Abbey vacillated between just that sort of worship, penned, you suspected, by writers who had posters of Ed on their walls, and a kind of angry dismissal of the writer as a misanthropic troglodyte.

Later I would discuss this issue with Ken Sanders in Salt Lake City. Ken’s store, Ken Sanders Rare Books, is one of the central places of worship in the greater Church of Abbey. While the names Morrison and Roth might be better known to the general reading public, in this store Abbey outsells all other writers combined. Here there is a cultish fervor associated with the man nicknamed “Cactus Ed.” And cults, whatever their flaws, tend to have the power to keep names alive.

“When I give talks about Ed my goal is to bring him back to life for a new generation,” Ken Sanders said when I visited. “There is a whole new generation of readers in college now who weren’t alive when Ed died. I want to introduce them to this writer who can still speak to them. He said he never wanted to write a classic. Because his definition of a classic was a book that everyone has heard of but no one has read. Well, Ed’s not written that kind of classic. He’s still read. We sell more of his work in the store than all other authors combined. After slow starts, both Desert Solitaire and Monkey Wrench Gang have sold over a million copies.”

Before I left, I asked Ken if he had ever thought of writing a book about his friendship with Ed.

I nodded. There was a whole cottage industry of I Was Ed’s Chum books.

It is a tricky business being an Ed Abbey fan these days. We shift toward uneasy ground. Because Abbey is no longer just a writer whose books you read; he is a literary cult figure who has followers. The skeptical reader recoils: “Oh, I don’t want to be part of that.” But clearly Abbey lives, at least in the West. Fresh off the press the same week I visited Ken was an article in the Mountain Gazette, a journal in which Abbey himself often published, in which M. John Fayhee, the editor, took no small delight in mocking the Abbey fandom: “They wore clothing that looked like what Abbey wore. They drove vehicles that would meet with Abbey’s approval. They tossed beer cans out of truck windows because Abbey did.” This hit a little close to home. I thought back to my days in Eldorado Springs and remembered the cans of refried beans I ate, part of the official Ed Abbey diet. I fear I was, unbeknownst to myself, a sort of groupie.

It is easy to mock the more rampant Abbeyites. But the tendency to attach ourselves to writers is a not an entirely unhealthy thing. Fandom may be laughable but it has its purposes. Stegner wrote of Bernard DeVoto that “father hunting had almost been a career for him.” He meant that DeVoto sought out older writers, and was eager to sit at their knees. He did this with Robert Frost, whom he first believed was “living proof that genius could be sane,” but whom he eventually broke from with the words: “You’re a good poet, Robert. But you’re a bad man.” Stegner in turn would look to DeVoto as a model, a father of sorts, though a father with the wild streak of an adolescent son. It is easy to dismiss these relationships as mere hero worship, as Oedipal. But what underlies it is something better, I think. A hunger for models. For possibilities. For how to be in the world. 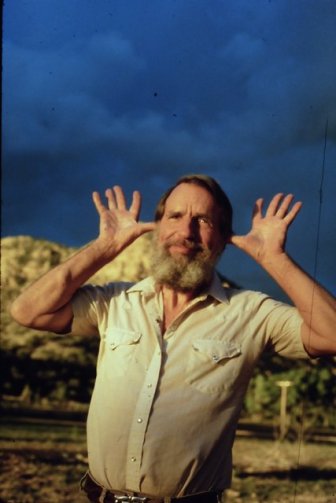 As we shook hands goodbye, Ken and I talked about how the Abbey legend had grown.

“He was almost as famous for his death as his life,” Ken said.

I knew that after Abbey died, his friends, per his instructions, placed his body in the back of a pick-up, packed it in dry ice, forged a death certificate, and took him out on one final camping trip. They drove him deep into the Cabeza Prieta wilderness and spent the night there, with Ed in the truck. The next morning they dug the grave, which two of them climbed down into to test for “fit and comfort.” When they deemed it acceptable they buried their friend and poured beer on the grave as a final toast. His burial was, of course, completely illegal.

The burial, and the wakes that followed, were well-orchestrated, and added greatly to his legend. The wakes, one in the Saguaro National Monument near Tucson and one in Arches National Park, were wild celebratory affairs. At the raucous public wake in Arches, “held on a big slab of white rock slanting out toward a whole world of mountains and desert,” according to Wendell Berry, Abbey himself had once again left instructions. Berry read aloud the letter celebrating Abbey from their former teacher. “He had the zeal of a true believer and the sting of a scorpion,” Stegner’s letter read. “He was a red hot moment in the life of the country, and I suspect that the half-life of his intransigence will be like that of uranium.” There was much drinking and singing among the red rocks, and not too much reading of words, just as Abbey wanted it.

Writing in his journal in October of 1981, Abbey had left elaborate instructions for not just how he should be buried, but for what music should be played, and what books read from, at his funereal. He wrote: I want dancing! And a flood of beer and booze! A bonfire! And lots of food—meat!

Not every man leaves stage directions for his final show.

Before I left, I told Ken that when I was first planning out my trip I was pretty sure I was going to go in search of Abbey’s grave. It was part of the Abbey legend after all—that grave out there somewhere in the unknown wilderness. I knew I would likely be able to find the spot: I had good contacts, old friends of Ed’s, and thought it wouldn’t be too hard to figure out the location. But when I got to the Abbey library in Tucson I changed my mind. The plan had the whiff of grave-robbing to it, and, worse, of a stunt, and I decided, finally, that I would let the poor man rest in peace.

I had seen pictures however and knew that Abbey’s grave, unlike George Stegner’s, was marked. In a manner at least. Abbey had chosen the epitaph himself.

David Gessner is the author of nine books, including the forthcoming All the Wild That Remains from which this piece is adapted. He is the founder of the journal Ecotone. Photographs courtesy of Milo McCowan and Lyman Hafe.