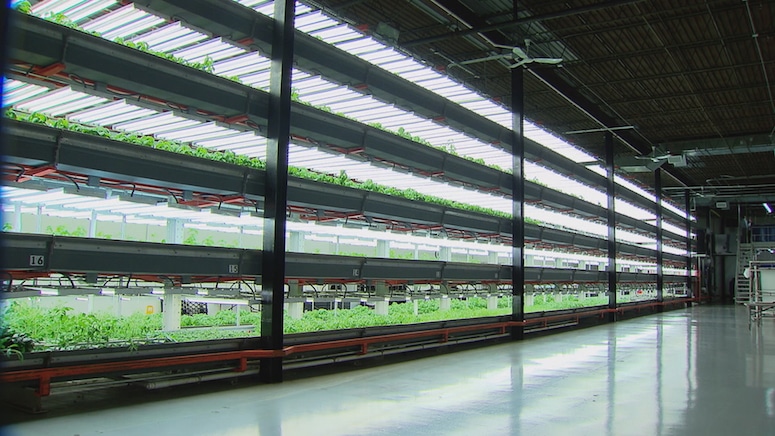 Living in a city is a lot like living in a desert. No matter how rainy the climate or how fertile the soil, no city is capable of supporting all the hundreds of thousands of people who live and work and drive there every day. There is not enough land, and there is not enough water. And yet 80 (!) percent of Americans live in cities. How do we get our food? How should we?

You know the answer to the first question. We grow our food in Kansas and California and Java, and we boat or ship or truck it around the world at enormous ecological cost. And though we’ve seen better choices begin to assert themselves—farmers’ markets and CSAs and food hubs have been popping up like mushrooms after a rainstorm—the inescapable fact is that food is usually grown outside of cities and away from the people who eat it. Urban real estate is just too valuable to devote many acres to crops. But in Chicago, they’ve found an answer.

FarmedHere is a vertical indoor farm in Bedford Park, Illinois, just south of Midway Airport. The key words are indoor (they use old corrugated box factories left over from Chicago’s industrial heyday) and vertical—the buildings house five levels of crops covering, all told, about 93,000 square feet. The people of FarmedHere grow arugula, kale, basil, mint, and salad greens, along with making their own basil vinaigrette. FarmedHere’s produce first appeared on grocery shelves in 2011, and is now available in dozens of spots across the Chicago area. Once it expands into its full potential—150,000 square feet are planned—the farmers expect to grow a million pounds of greens a year. FarmedHere is probably the biggest indoor organic farm in America.

How do they manage all this indoors? Isn’t it ruinously expensive and wasteful? Not at all. With no pests and minimal weather, the crops don’t need the same sort of artificial (and expensive) inputs that outdoor vegetables would, and there is no soil. FarmedHere cultivates its herbs and greens using only nutrient-rich water. The system is called aquaponics. FarmedHere raises tilapia on-site (which they sell to wholesalers), feeds them organic fish food, and cycles water through the fishes’ tanks. The water absorbs nutrients (aka fish poop), which is pumped along to feed the arugula, mint and so on. After the plants have consumed the waste, the cleansed water flows back into the system, and 97 percent of the water is conserved. Targeted growing allows FarmedHere to use about 10 percent of the water demanded by most farms. Power is expensive, but the company is switching its lighting system to super-efficient LEDs, which is also expected to increase their yields as well as lowering costs.

Chicago is not known for organic food (though I will never say anything bad about deep dish pizza or kielbasas); its growing conditions are not exactly stellar most of the year (the last time I visited, the thermometer read 18 degrees below zero); and it doesn’t have very much green space. Nonetheless, Chicago is in the vanguard of urban agriculture. Beyond FarmedHere, Green Sense Farms cultivates organic vegetables under LED lights, and The Plant, which also uses tilapia, raises mushrooms and shrimp along with greens and fish. The Chicago Botanic Garden runs a project called the Windy City Harvest Youth Farm, where hundreds of young Chicagoans farm in locations around the city, from schools to rooftops. The movement is growing elsewhere, too, with vertical farms all over the country. FarmedHere, for its part, is looking to expand to other site, and I confidently expect that in the future, more and more Americans will buy super-local food raised indoors in their home cities.