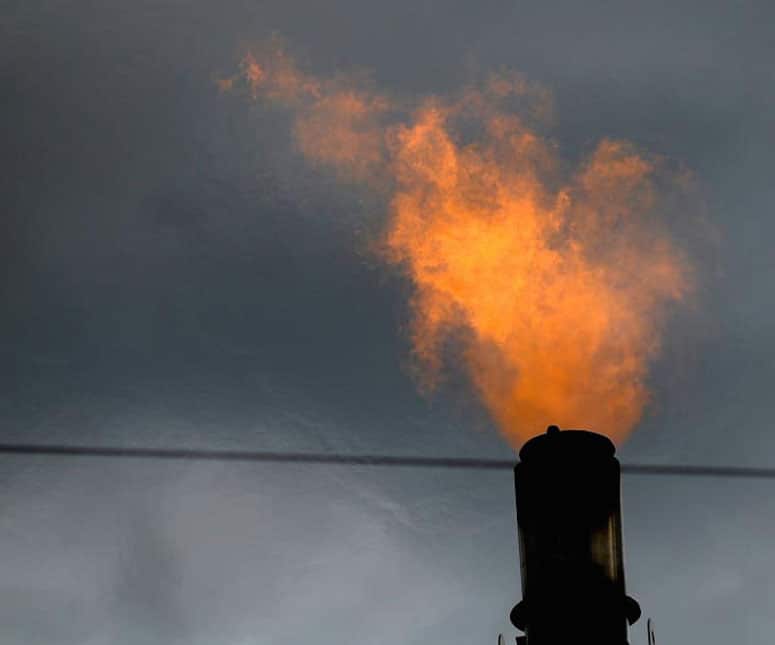 Concrete Progress is an ongoing series of columns by Peter Brewitt devoted to exploring America’s infrastructure. It is part of Orion’s Reimagining Infrastructure project. Above: a landfill flare burns off excess methane, a potent greenhouse gas and a potential source of energy.

The BMW factory in Spartanburg, South Carolina loomed above my van, immense, impassive, absolute. It was one of the biggest buildings I’d ever seen, blotting out the horizon and stretching off into the distance. I felt like a Game of Thrones peasant riding a horse-drawn cart up to a castle.

In actuality, I was taking my students on a field trip. We were learning about globalization, and there are few better examples of globalization than a German car company making X4 coupes in upstate South Carolina. It was a truly fascinating tour—the windshield robots alone were worth the price of admission—but the whole time, as I looked through my safety glasses at cars being hoisted up and whisked through the air, I thought, “This place must devour fossil fuel.” But I was wrong. When I asked our tour guide how BMW powers its operation, I found that the factory runs not on coal from strip mines or oil from offshore wells, but on gas from the local landfill. BMW churns out 1,200 cars a day mostly on trash.

The process starts with municipal solid waste. This is the technical term for household trash, the plastic wrappers and takeout containers and appliance cases that you cannot recycle or compost. Most people bag it up and leave it for pickup; a few cart it off to the dump (as we used to call it), where it’s thrown into a lined pit and left to decompose. When full, the landfill is capped, typically with clay or some other impermeable layer.

This cap is meant to keep waste products from leaking out, but it also keeps oxygen from getting in. The stuff inside, therefore, decomposes anaerobically, with little organisms consuming the material in a process similar to fermentation. As a result, all of the stuff in your trash bags goes through several forms before ending its solid life as landfill gas (or LFG), which consists of roughly half methane (CH4) and half CO2 and water.

In about a quarter of landfills, LFG is flared (which is to say, burned) as it rises out of the ground. In others, it simply drifts off into the atmosphere to join the rest of our greenhouse gases as they warm up the earth. Landfills are the third-largest source of human-produced methane in the United States, and methane is a far more powerful greenhouse gas than CO2 (a pound of it captures twenty times as much heat as a pound of CO2). The waste is also unstable—LFG can be the cause of fires and explosions at landfill sites.

But while it’s a troublesome waste in some contexts, it’s a powerful fuel in others. Methane is essentially what you’re using if you heat your house with natural gas. It’s an increasingly important part of the American economy, and it’s tremendously controversial. As readers of Sandra Steingraber’s columns in Orion will be aware, natural gas is what fracking is for. In the case of landfills, however, methane is wafting into the air not from fossil fuel deposits but from our own waste. The key is using it.

In 1999, the EPA’s Landfill Methane Outreach Program suggested that BMW consider the Palmetto Landfill, ten miles east of its Spartanburg plant, as a means of supplying its huge energy needs. An enormous operation on the lookout for efficiencies, BMW soon had a pipeline sending gas from the trash to the factory and producing 25 percent of its power. The system works the way a coal mine would—the LFG is processed to remove impurities, then sent along for use—but without degrading new landscapes, creating new waste, or depleting a nonrenewable resource. LFG can be turned into electricity, or burned directly for heating. Its waste products are water and CO2. After upgrading its generators in 2009, BMW’s Spartanburg plan uses the Palmetto landfill for over 60 percent of its energy, saving the company an estimated $5 million a year.

Around the country, there are 621 landfill gas projects under operation right now, supplying hospitals in Wisconsin and prisons in Pennsylvania and dump trucks in Louisiana. The sad thing is, this is less than a third of the landfills in the country. By my calculation, about half of our nation’s landfills neither flare their gas nor put it to use, but simply let it continue to pollute the atmosphere. Still, it’s an industry that’s growing quickly: LFG use has quadrupled in less than twenty years. To date, the EPA has found 450 candidate landfills, all of which generate methane. Hopefully they’ll be turned into sources of heat and power in the near future.