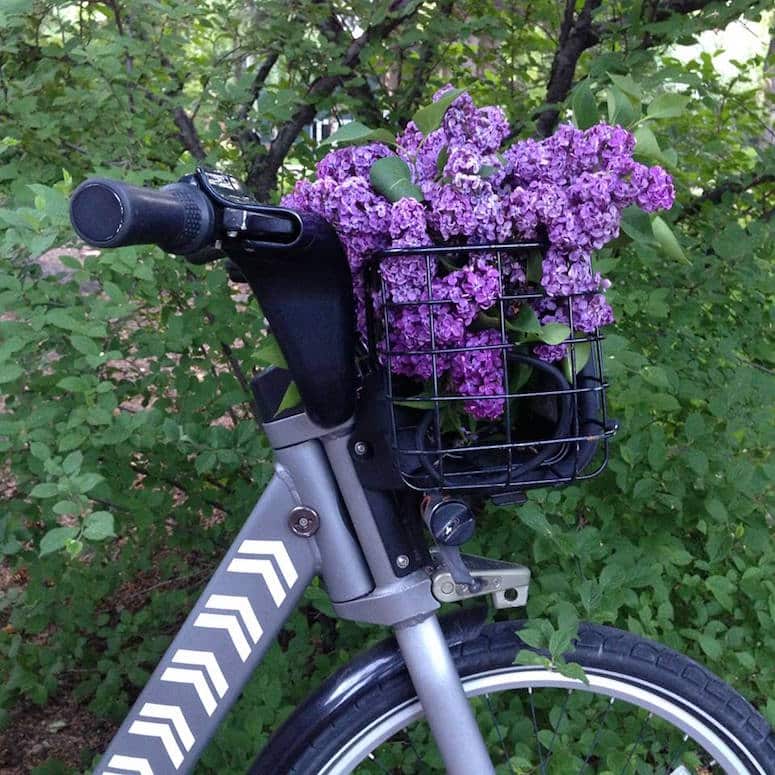 Say you’re a movie star. Life is good, but one day you decide that Los Angeles, with its massive traffic jams and gritty air and plastic balls in the water, isn’t for you. At a wrap party, Kevin Costner urges you to check out Aspen, Colorado. You fly in, and Aspen feels exactly the way you’d hoped, its adorable shops and classy bars and dignified old buildings surrounded by splendid Rocky Mountain scenery. It is a John Denver song, Old West, New West, and Wild West in one little town. The slopes and restaurants are full of people, winter and summer, who come to ski and hike and eat elk burgers. But with all these people, you wonder, how is it that the streets and the air of little downtown Aspen aren’t congested like LA’s?

One reason: everyone’s riding a bike.

The popularity of bike culture in Aspen is largely due to the work of a local nonprofit called WE-cycle, a bike-sharing program overseen by community activist and Aspen native Mirte Mallory. Mallory, a friendly, gregarious, frizzy-haired woman who was a competitive skier and cyclist in college, is engaged in an array of initiatives, from environmental education to county planning and zoning, but her main occupation is WE-cycle. When community leaders worried over traffic congestion and air quality in Aspen, she remembered some successful bike shares she’d seen in Europe, and thought she could bring the same idea to the Rockies.

Bike shares are essentially public fleets of bicycles, available to anyone who buys a membership. Riding a bicycle instead of driving a car is, of course, one of the best ways for a regular person to help the world. It’s cleaner, low carbon, more fun, better for you, and, if you live in a city, often much faster than driving a car or taking a bus. But, of course, it can be expensive to buy and maintain a bike, and if you’re visiting, or just looking to do the occasional errand after work, it may not make sense to purchase one. Bike shares allow you to have the environmental and quality-of-life benefits of bikes without the expense and hassle of owning one. As interest in bikes has exploded (and as downtown cores have become more appealing places to ride around), so too have bike shares. There are almost a hundred of them in the U.S., with more starting all the time.

Now, for the most part this is an urban phenomenon—you need a certain amount of density for bike shares to really deliver value. Aspen is believed to be the first mountain town to have a bike share program. But while Aspen’s population is only 6,738, its problem—and that of other ski towns and beach towns and river towns and cathedral towns—is that during tourist seasons, the place holds the same kind of human density and municipal pressures as a much bigger city. It needs to reduce traffic just as much as Manhattan does.

The idea for WE-cycle came to Mallory in 2010, when it seemed like most of the bikes in Aspen were built to rocket down mountain trails rather than to get people around town. She cobbled together money from a wide variety of public and private funders, and, in 2013, WE-cycle’s first bikes were rolling along Aspen’s streets. By 2015, Mallory and her team built a system of one hundred bikes and sixteen docking stations covering the downtown core and surrounding areas.

Here’s how the system works:

You start by buying a pass—for a day, a weekend, a month, or a whole season. The day pass costs nine dollars; the season pass for fifty dollars takes you from May to October. (You have to be pretty rugged to bike in the Colorado winter.) You can get passes online, or, in the case of day and weekend passes, at the bike stations themselves. You swipe your card and, for the next thirty minutes, bike wherever you want in town. This makes it easy for people to commute on the bus and then ride to their daily destinations—the mile between the bus station and the office is often the reason people drive their cars. Most of WE-cycle’s riders are local, season-pass holders who make bikes part of their everyday routine, taking their cars off the road all summer long.

The thirty-minute limit is intentional. WE-cycle is intended for people to make their way around town, not to ride off into the mountains. The idea is to keep the bikes in circulation and available for all. The bikes are heavy and durable—rigid aluminum frames, puncture-resistant tires—and riders would not want to go twenty or thirty miles on one. Even the farthest-flung stations are only a fifteen-minute ride apart, so no one is likely to keep a bike for very long. If you do happen to hang on to your bike for longer, you start to incur overtime fees—a few dollars for an extra thirty minutes, and more thereafter. The layout of the stations, as well as real-time updates on how many bikes and docks are available at each station, can be found on WE-cycle’s website or on the CycleFinder or SpotCycle apps.

As of mid-September 2015, partway through WE-cycle’s third year of existence, it had 17,700 rides. That’s 13 percent growth since last year, and 89 percent since year one. And the growth isn’t just in ridership; WE-cycle is starting to partner with towns throughout the Roaring Fork Valley to connect bike shares to the valley-wide bus system. In the near future, you may be able to travel freely throughout the Valley with no car at all.

It’s important to note that bike shares are not simple to run—they require constant monitoring and responsiveness. Some programs fail, and some riders abuse their bikes. Winter, with its weekly horde of skiers, remains a challenge in Aspen. (If you ask me, WE-cycle should add those awesome but silly Fat Bikes to its fleet for snow riding.) But by virtue of being a small-town program, WE-cycle can respond swiftly to any issues with its bikes or their riders. Since most of WE-cycle’s pass holders live and work in Aspen, they are plugged into the community. As bike shares become more and more common, the people who run them are learning, and making their bike shares, as well as their communities, more sustainable. In the future, movie stars may not have to buy a cabin in Aspen to escape congestion; Los Angeles is starting its own bike share.