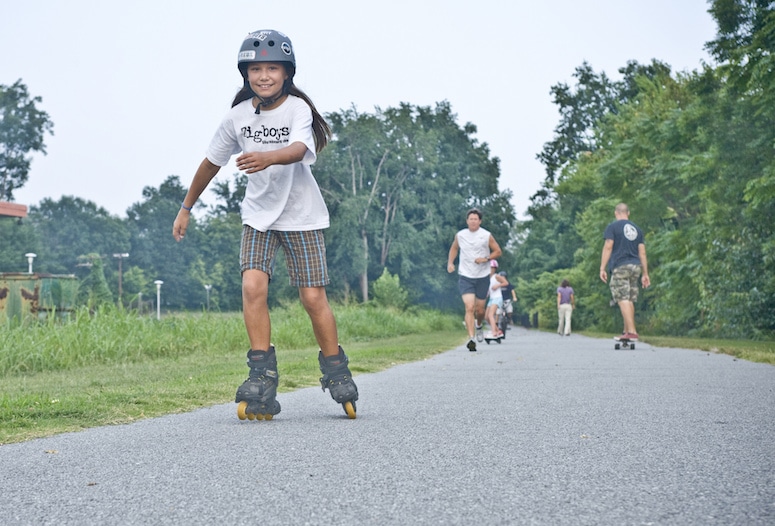 The Mary Black Rail Trail, in Spartansburg, South Carolina. Courtesy of the City of Spartansburg.

Concrete Progress, which concludes with this installment, has been an ongoing series of columns by Peter Brewitt devoted to exploring America’s infrastructure. It is part of Orion’s Reimagining Infrastructure project. The entire series, stretching back to its start in 2014, is collected here.

Walking home the other day, I mulled over what to write for this, my last Concrete Progress column. I wanted to get away from some of the twenty-second-century technologies that I’ve been focusing on lately and turn back to old stuff, to the rediscovered lifeways that form the basis for so much great, new sustainable infrastructure—those preindustrial solutions in a postindustrial age. But what? I looked around at the trees, at the road, at the fourteen-story Denny’s building that defines Spartanburg, South Carolina’s skyline.

Then I realized that I was walking, and that I was on a converted railway bed, not so different than the one I wrote about in my first column. So there it was, perfect as an episode of Firefly— my final column would be the path that takes me home. It may sound contrived but, as Dave Barry used to say back when he was funny, I am not making this up.

The path in question, which I walk every day to get to my office on the city’s northern border, is the Mary Black Rail Trail. From before the Civil War, this stretch of ground saw trains and trolleys haul people and freight in and out, from Spartanburg to the mills and villages in this part of the South Carolina piedmont. By the late 1990s, though, it didn’t make sense for Norfolk Southern, the railway at the time, to run trains there anymore. The line rerouted around the city, and the tracks got overgrown. Trains continue to run through Spartanburg—if you spend a day here, you hear that lonesome whistle blow many, many times—but this stretch of track seemed destined to fade into history.

Enter the Palmetto Conservation Foundation, an environmental group that conserves and promotes the nature of South Carolina. Its main project, and the one for which it’s best known, is the Palmetto Trail, a mostly complete four-hundred-plus-mile path that runs from the Blue Ridge Mountains to the Atlantic Ocean, near Charleston. The foundation was joined by the Rails to Trails Conservancy, which is dedicated, as you’ve already guessed, to turning old railways into new public-use trails. The Conservancy saw an opportunity to add Norfolk Southern’s abandoned tracks to the section of Palmetto Trail that runs through Spartanburg. After some negotiations the deal was struck, and the railroad gave its right of way to PCF. (It helped that George Dean Johnson, a powerful politician and businessman, and an active conservationist, was on the Norfolk Southern board of directors.) The players cobbled together money—some from the state and some from private groups like the Mary Black Foundation, for which the trail is named—tore up most of the tracks, laid down asphalt, and opened up in 2006. By 2009 it got twenty-five thousand uses a year. By 2012 the number had climbed to sixty-five thousand.

It’s easy to see why: the Rail Trail works for everyone. When I head to work, the first thing I see as I hit the rail trail is a dog park (The Rail Tail, obviously), always full of boisterous dogs and their people. As I walk, I see all the faces of Spartanburg—kids on their bikes, young professionals walking their schnauzers, stone-faced runners, older ladies walking chattily along. It is probably the most racially diverse place in town. Whoever’s out there, early or late, we almost always say hi to one another unless someone is deep in his headphones. There’s a pretty lively bird population in the trees and bushes, and I must say that after ten years in the West I get a little thrill out of seeing blue jays instead of boring old Steller’s jays. In the fall—and I speak with the authority of a New Englander—the leaves are beautiful.

Farther on, the trail crosses a couple of streets with walking maps at the junctions. There’s a line of apartments for young singles, with porches and backdoors that open right up onto the trail. At the trailhead, there’s an interpretive sign that shares some of Spartanburg’s railway history. Opposite the sign is a rack of bikes (and a trike), part of Spartanburg’s B-Cycle program. All along the trail you can find art and scavenger hunt clues and little activities for elementary school kids. In the next couple of years, the trail will expand through downtown and into the parkland to the north. From there you can walk, presumably, all the way to the Blue Ridge.

Rails to Trails has transformed upward of twenty-one thousand miles of rail line to walking/biking/dog-walking trails in the past thirty years. That’s like walking from New York to San Francisco seven times. This is the epitome of Reimagining Infrastructure—the oldest forms of transportation rediscovered, the remnants of past economies reused, the newest good ideas embraced and promoted. Rail trails link communities, help people get and stay healthy, connect walkers with the natural world. They have—and I’ve found myself saying this a lot as I’ve written these columns—no downsides. They make the planet a better place and that’s all there is to it.

When you care about the environment, it’s easy to get a little down about the future, melting glaciers and all. But what I’ve found, throughout the years I’ve been writing Concrete Progress, has been hope. And more than hope, I’ve found solutions: I’ve seen dozens of great ideas and inspiring people who really are saving the world, step by step, place by place, day by day. My columns have skewed a bit toward the places that I’ve lived: California, Vermont, the Carolinas. But I’ve looked around enough to know that infrastructure is being reimagined everywhere, across the continent and beyond. Probably in your hometown, too.

Now, I’m a realistic man. I think back on the projects and ideas I’ve written about, and I know that, in the end, some of these things won’t work out. And some of them will only ever be small-time solutions for particular places. But as I think about the people I’ve met, the places I’ve seen, and the ideas I’ve allowed into my brain—as I think about the way that committed people are reimagining their transportation, waste, energy, food, and water systems—I know that I have seen the future. It’s been a joy sharing it with you.