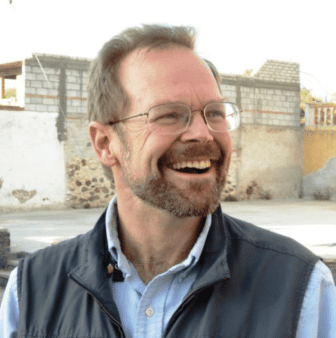 Christopher Merrill directs the International Writing Program at The University of Iowa. He serves on the U.S. National Commission for UNESCO and is the author of many books of poetry and nonfiction, including Things of the Hidden God and Self-Portrait with Dogwood. Chris served as the co-editor of Orion’s poetry from 1994 to 2003 and founded the Forgotten Language Tour, a program of Orion that was active in the 1990s.

A few days after President Trump’s announcement that the U.S. would withdraw from the Paris Agreement, Orion editor Chip Blake sat down with Chris for this short interview.

CB: You travel to more different places than anyone I know. Based on what you see and hear, what can you say that explains the differences in the rest of the world’s willingness to take climate change seriously, as opposed to the U.S.’s willingness.

CM: For Americans, climate change can sometimes feel abstract. We can’t imagine, protected as we are by two oceans and enjoying the bounty of natural resources, that we will actually get caught by it. We think it will happen to other people.

I travel a great deal to places in conflict, where it is crystal clear that scarcity of resources and climate change are large contributing factors to the outbreak of wars and the resulting human migration. In parts of Africa, in the Middle East, in Afghanistan, climate change is a real concern for people trying to live their lives. It is a tangible thing. Thus when we speak about the civil war in Syria, a precipitating cause of the refugee crisis tearing apart the fabric of the European Union is the war in Syria, we often forget the fact that it was not just a revolt against an authoritarian regime but a consequence of climate-induced drought.

It was thrilling, wasn’t it?, to see almost every nation on earth come together to produce the Paris Agreement, with people working together for the first time to solve the global climate problem. Which makes Donald Trump’s decision to pull out of the agreement all the more alarming: it signals to the world that our policy is not just America first, a doctrine rooted in the isolationism and anti-Semitism of the 1930s, but America only. When a large-scale problems occurs, as it inevitably will—let’s say an outbreak of Ebola or avian flu—who will to want to help us? If we forsake our tradition of enlightened self-interest, which among other things led to the rebuilding of Europe after World War II and the decision to bring Germany and Japan back into the community of nations, then we will be lost. Our values count, despite what we hear these days from the Trump administration.

CB: In drawing attention to climate change, what is the role of the writer?

CM: First and foremost, writers bear witness to what’s happening at any given moment. So those who write about human migrations are directly or indirectly addressing the climate issue. Writers also bring a level of complexity to their thinking, and when it comes to migrations and climate change it behooves us to recognize the complexity of the situation. Populism depends on simplifying things, on appeals to our sense of grievance, on summoning our darkest impulses. Writers in their various ways are after something larger. They tap into larger spiritual currents and enduring traditions. They try to figure out what’s right, even as they testify to all the ways in which we fail to act well or fall down. Writers give us a larger and more complex understanding of existence.

CB: Where do you find any hope in the way people talk or write about climate?

CM: Writers generally have faith—in their language, in their ability to ferret out the truth, in their determination to document how people do or do not listen to their better angels. Directing the international writing program, I am surprised and heartened by the ways in which writers coming from dire circumstances make sense of what is happening around them. We have hosted writers from Afghanistan who live in horrendous conditions, and yet write with a kind of joy. A novelist from Damascus, Khaled Khalifa, told me early in the war that he felt obliged to testify to what is happening to his country. Not long ago, the Bangladeshi novelist, Anisul Hoque, who warned about the effects of rising sea levels, found himself in the Islamists’ crosshairs, his photograph plastered on the front page of a newspaper with a caption ordering the faithful to kill him. He sought refuge in this country, staying only long enough for the immediate threat to pass and then returning to Dhaka to continue his vital work, albeit accompanied now by armed guards. And I think today of Anna Akhmatova, the Russian poet who endured one tragedy after another, insisting all the while on bearing witness to what was happening in Soviet Russia. Her protégé, Joseph Brodsky, said that in her work one hears “the note of controlled terror”—which is a note that every writer might hope to sing. Her heroism and her poems inspire. •