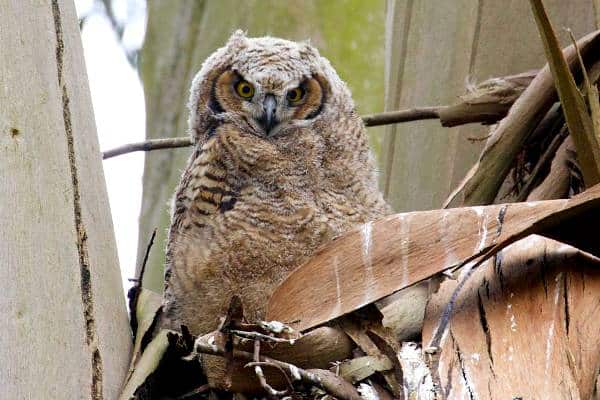 (This owlet and her two siblings were raised, over a two month period, in the crook of this Eucalyptus tree, as have been 13 previous clutches of Great Horned Owls. Photo: Janet Kessler)

This March, we published a thought-provoking article “Native or Invasive,” by Anjali Vaidya, a writer who divides her time between Bangalore, India, and Southern California. What resulted was some interesting conversation and responses, one of which we’d like to share below:

We applaud Anjali Vaidya’s bold and poetic “Native or Invasive” (March/April 2017), which suggests a parallel between the native plant community’s rampant hostility toward “invasive” species and xenophobia regarding human immigrants. “Othering,” whether directed toward plants, non-human animals, or humans, has never done much to advance either science or human rights.

Fortunately, a sea change is now under way in the scientific community, as more and more researchers acknowledge that migration is a fundamental right of nature, and that in our militaristic assault on “invasive” species, we have hubristically done more ecological harm than good. Here in northern California, a group of environmental activists have fought—successfully, so far—against a plan to clearcut, on public lands, hundreds of thousands of a stigmatized tree species (eucalyptus). The shortsighted folly of such a plan–in an era of climate chaos, when every tree is a precious carbon sink—cannot be overstated. Like many “restorationists,” the plan’s supporters—who, shockingly, call themselves environmentalists–hitch their wagon to the heavy use of pesticides, including Roundup (which the World Health Organization has pronounced a probable carcinogen) and other toxins intended to kill “weeds” and prevent regrowth of the hated species.