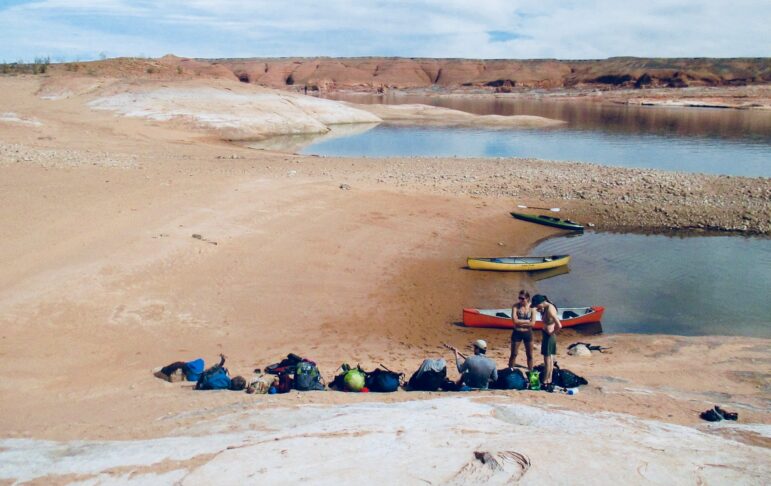 In the late 1970’s, Cindy and Donny drove their canoe to Lake Powell—the highway south to Hite was newly paved, sliding across the landscape that would someday become Bears Ears National Monument—and set out for a nook called Hall’s Creek. The reservoir was still filling in and they’d heard about a unique jut of land where you could land your boat and climb out. The high water made new spaces accessible, opening up routes impossible to reach just a few years earlier, standing on the shoulder of the submerged spaces underneath.

They found the spit of land someone told them about, stashed their canoes, and hiked into the backcountry without a map. It was late summer and the potholes were dry. They had enough supplies to last a few days, but it was too hot, and they worried about running out of water. After three days they turned around and followed their tracks—the only tracks, breaking the fragile bio crust—back to the lake. They were thinking about the long drive home and a hot meal back in Salt Lake. They were thinking about the weight of their packs, but they weren’t thinking about their canoe until they realized it was gone.

When we followed Cindy and Donny’s route last spring, paddling our own canoes across Lake Powell towards the southern edge of Grand-Staircase Escalante National Monument, we had the canyon-turned-lake, mostly, to ourselves. There were houseboats—Serenities and Nauti Bouys—anchored near shore. A beach with overturned tires roasting in the sun. Another beach with a pontoon canopy frame sticking out of the sand like spider legs. These human structures sat listlessly waiting for somebody to move them, fix them, take them somewhere else. 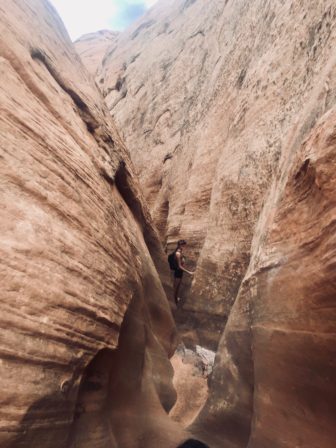 We didn’t stay on the water long. Within a few hours we reached a sandy peninsula, pulled our boats onto the beach and left a message taped to one upturned bow: These boats are not abandoned. Please do not steal. Our lives depend on them. We will return on March 26. Our trajectory was a climb into the Waterpocket fold, a 100-mile-long buckle of sedimentary rock stretching from Thousand Lake Mountain to Lake Powell. It’s a buckle filled with sandstone arches, gypsum walls, and potholes filled with snails crawling along the rim. This is not a landscape I had immediate language for: the slick rock we gripped without falling. The slot canyons we disappeared down not knowing what might be on the other side. The wide, flat areas filled with sand, the wash, where the water wants to run when it rains.

The drizzle started on the third night as we cooked dinner, a relief after two days of sun. We pulled on rain jackets and watched the direction of the clouds. We could see real rain in the distance, miles and miles away, and we watched it pass as we finished eating. At midnight the wind picked up and the tent poles started to bend. I put my hand out. Whether or not our tent would really cave in, it was a gesture. I pushed and the wind, tunneling down the canyon, pushed back. Then I heard it—water running past the tent.

I stepped outside and found the flood—a stream I could step across—winnowing past in the darkness. It was impossible to know how much water was gathering in the plateau above, so we started pulling up tents. Sandals and stakes float away. The thunder is already in the distance by the time we’ve moved camp safe above the wash. I imagine the whole desert shifting itself under the miles and miles of rain. The streams are carrying sandstone into Lake Powell, and the canyon at the bottom is filling back up. I spent a million years moving this shit out of here, the canyon under the lake might say, and when this dam is gone, I’ll do it all over again.

Cindy and Donny never found out what happened to their canoe. It’s at the bottom of the lake or in someone’s Salt Lake City backyard. Donny followed the shoreline for a day until he found help, and another boat, to retrieve Cindy from where he left her by the edge of the water. Our boats were waiting for us when we climbed down from our campsite and paddled back to the landing. 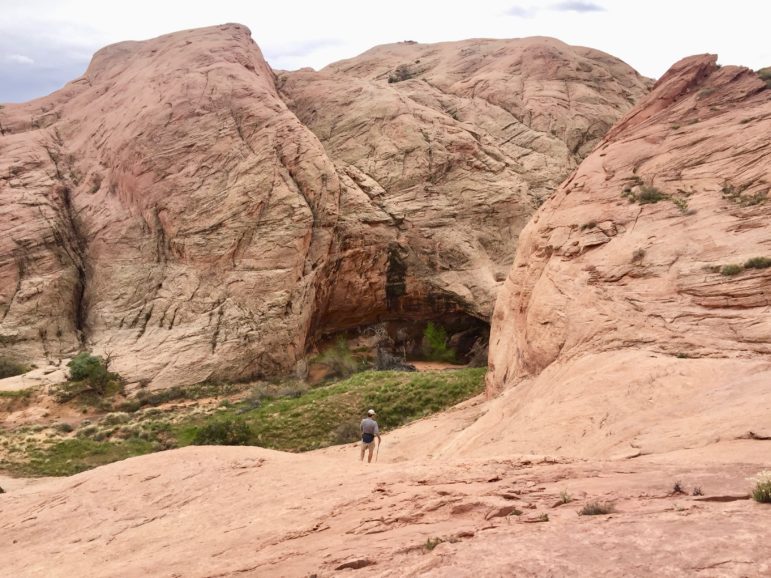 There’s a game I’ve played since childhood, a habit that flickers every time I visit a familiar city: first I try to see past the telephone poles, then I readjust the slope of hills cut flat by roads. I’m curious about landscapes before they were occupied by my ancestors, before short-term profits superseded ecosystems, before trash was left along a shoreline that used to be a canyon. The closest word I’ve found for this game of uncivilizing is anamnesis, a Platonic belief that we can possess knowledge from past incarnations. Its root contains a forgetting, amnesia, but the word believes in the act of remembering.

President Trump’s recent decision to shrink Bear’s Ears and Grand-Staircase Escalante National Monuments and expose those public lands to extraction is a form of state sanctioned amnesia. It denies future generations the opportunity to experience and know a landscape bigger than ourselves. Glen Canyon will not return in our lifetime, and neither will the public lands our President is currently turning over for profit and consumption.

The day after the storm, high into one drainage, we wandered towards a willow tree and found two balloons caught in the bushes nearby. One said Congratulations. The other was shaped like a shamrock. We tried to retrieve them but the sun-bleached latex disintegrated in our hands.