Magazine covers often have stories of their own. For our Spring 2018 issue, we came across a photo that stopped us in our tracks, one of a spectacled spiderhunter in Borneo. The image had originally been featured in A Visual Celebration of Borneo’s Wildlife. Editor-in-Chief Chip Blake reached out to its photographer, Bjorn Olesen, for a little background on the capture. 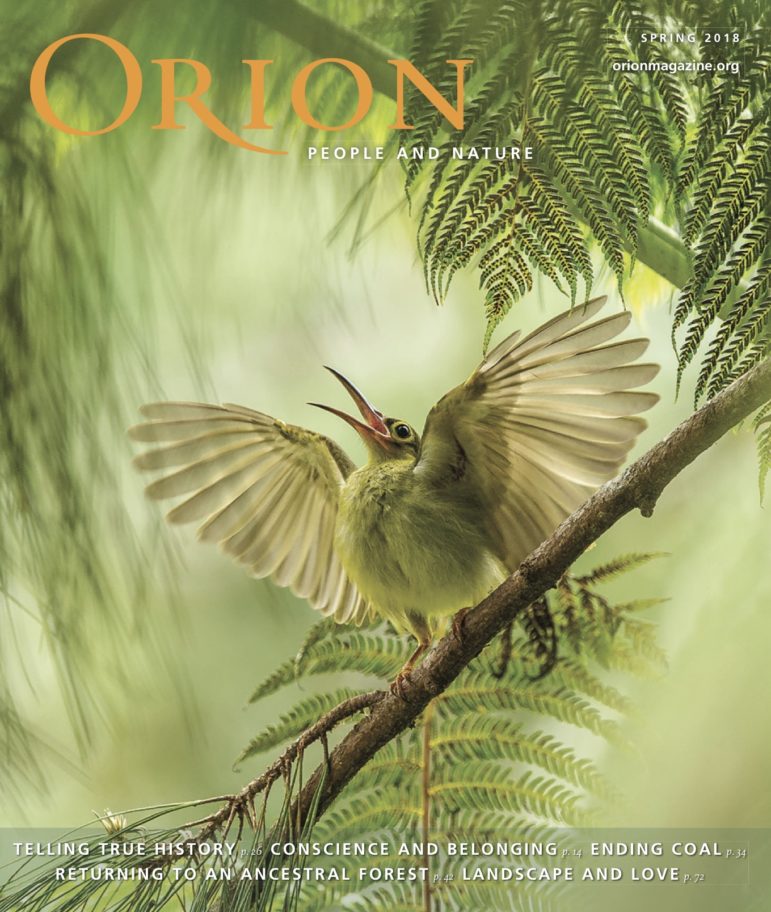 CB: Can you tell us more about the image that appears on the cover of this issue of Orion?

BO: I was in the Penrissen Mountain Range, which sits on a plateau more than 1,000 meters above sea level between the states of Sarawak and Kalimantan in Borneo. I had spent the whole morning trying to capture photos of the Spectacled Spiderhunter. It was a delight to watch these spiderhunters slurping nectar from wild banana flowers, but photographing them was unsuccessful because of bad light.

Just before I was packing up, I heard a chi-chit call from a shady collection of fern and pine trees. I went over to investigate, and there I saw a newly fledged Spectacled Spiderhunter trying to attract the attention of its parents above by calling and flapping its wings. It was one of those moments where everything fell into place for a perfect photographic opportunity.

CB: What are some particular challenges when taking photographs in a place like Borneo?

BO: Taking photographs in the tropical rainforest is always a challenge. Light conditions are rarely good, and on top of this, visibility is often poor. As in many other Asian countries, hunting pressure is often high outside protected areas, resulting in wildlife that is difficult to approach.

CB: What first drew you to work in Borneo in the first place?

BO: One of the first travel books I remember reading was The Malay Archipelago by Alfred Russel Wallace, an inspiring publication about Asia’s most spellbinding region. My addiction to Borneo started much later in 1998 when I moved to Southeast Asia. After having climbed Mount Kinabalu, I visited the Kinabatangan River to see the real thing.

CB: Compared to other places you’ve traveled, what’s unique about Borneo? How is it different?

BO: Borneo’s humid rainforests and climate deliver near-perfect conditions for a variety of species to thrive, many of which are endemic to the island. It is this diversity that makes Borneo special. To mention a few: Borneo Pygmy Elephant, the Bornean Orangutan, and 15 other species of primates (not counting humans). Birds are, without a doubt, the most conspicuous elements of Borneo’s fauna, with more than 600 species, 40-60 species of which are endemic.

CB: Looking through your book, I am reminded of 19th-century collecting expeditions that took place in the tropics. It seems that photography has become the new way in which things are collected.

OB: Digital cameras have taken photography to a whole new level, and it is now possible for the general public to take photos of such excellent quality under difficult conditions. In practical terms, this means that we have a much better chance to record rare animals and rare animal behavior, and this can be done without damaging the environment.

About the Photographer: Bjorn Olesen is a retired corporate executive, award-winning wildlife photographer, author, and engaged conservationist. A Singapore resident, he lived for 16 years in Malaysia and Indonesia. His images and articles have appeared in various overseas and local publications, and all of his photos are available free of charge to non-profit NGOs.

About the Book: From the publisher: “Illustrated with more than 350 images, taken by Bjorn Olesen and other wildlife photographers, A Visual Celebration of Borneo’s Wildlife is a photographic tribute to the most spectacular wildlife species on the second-largest tropical island on Earth. Based on the latest research, it is filled with captivating little-known facts about the wildlife that modern-day travelers may come across when visiting this enchanting island. It also describes the top 16 wildlife locations in Borneo, with a comprehensive list of recommended reading, websites and blogs provided.”

All royalties from the sale of A Visual Celebration of Borneo’s Wildlife will be donated to Fauna and Flora International for their nature conservation work in Southeast Asia.