Every issue of Orion includes a poetry broadside bound into the back cover, illustrated by a different artist each year. Orion is honored that Nikki McClure, a papercut artist living in Olympia, Washington, will illustrate this year’s series.

McClure is widely celebrated for her images made from black paper and an X-Acto knife. Her first broadside in the series—included in the Spring 2019 issue—pairs with Mary Oliver’s poem “At Blackwater Pond.” We caught up with McClure to learn more about what it meant for her to work with Oliver’s words, her process, and what she’s currently reading.

NT: Your first Orion broadside was included in the Spring 2019 issue, papercuts paired with a poem by Mary Oliver. What is your personal connection to Oliver’s poetry?

NM: I was introduced to Mary Oliver’s work by a good friend and older mentor, Georgia Munger. She was a retired elementary school librarian who gave me my first art shows and encouraged me often by reciting inspiring poems at just the right moments. I would take a book of Oliver’s poems with me when I volunteered in my son’s classrooms, teaching “art.” Really it was teaching chaos, so I would read a poem each week to center them, to get them thinking about time in a certain place. What is our time now? Here?

I wrote to Mary once to see if I could illustrate a book of her poems for children. The request was denied. She wasn’t interested in that idea. I kept reading her poems to children anyway. Then when Orion contacted me to do a series of broadsides, I said I couldn’t right now, but in a year I could, and I would do it if I could illustrate a poem by Mary Oliver. Orion conducted some editorial magic and made that happen, and I was able to pick any poem I wanted of hers.

I sat down and read every poem I had, including books Georgia Munger left to me when she passed away. All day I read and thought about her words and life as I perched in my window seat. The next morning, I started drawing images for “At Blackwater Pond,” but everything I drew looked like a woman crying rivers of tears into her hands. I sent in a rough sketch to Chip Blake. It was then when he told me she died that very morning.

Without knowing it, I held this feeling of murmuring, singing, and listening to her words all day while she was passing. I never met her or spoke to her, but her ripples have met mine.

NT: What did it mean for you to work on this Mary Oliver piece?

NM: It was a life honor. 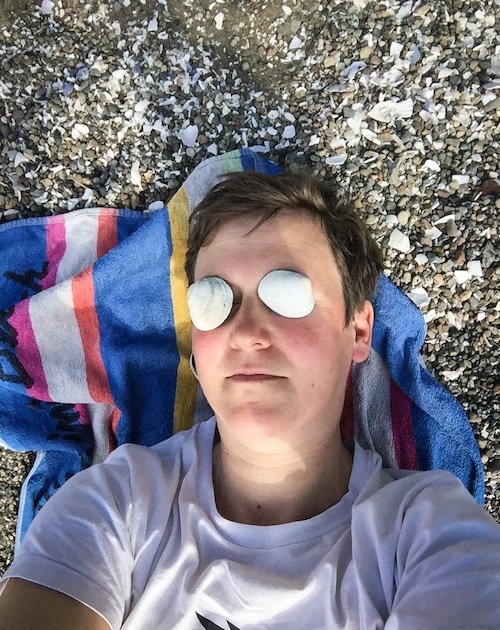 NT: X-Acto knife and paper. It appears that your style, like writing, is more the art of subtraction than addition. Is that accurate?

NM: Yes, I use paper to reveal a story. I start with a piece of black paper that I cut away. Writing is adding and piling and making, marking up white space, and then paring away, trimming down to the essential. My visuals are probably most like poetry. I seek the elemental shape or line that makes an apple leaf different from a pear leaf.

“I never met her or spoke to her, but her ripples have met mine.”

NT: How many times a week do you prick yourself?

NM: Never. I often extract splinters imbedded in my fingertips from dry firewood or thorns from impromptu weeding using my X-Acto knife and dissecting microscope. Any unintentional cuts usually involve making lunch too quickly, or while chopping kale.

NT: Papercuts are your signature style. How often do you veer from this form?

NM: I mostly cut. But the preparation for cutting involves drawing. And the preparation for drawing is writing. And the preparation for writing is living. So I do all of those things, then I sit down and make a papercut. Earlier in life, I painted watercolors when on vacation. But now any spare creative energy is consumed by making interesting and nutritious dinners, spontaneous pagan celebrations, mending clothes, and tending my strawberry garden, though the “tending” part is usually just watching native bees travel from blossom to blossom. I spent all day yesterday trying to indigo dye turkey tail fungi onto fabric.

NT: What is your process for responding to something written and making it visual?

NM: I have the reminder “Show what words cannot” taped to my cutting desk. To illustrate is to enlighten, to make visible and clear. I try to add what the writer left out, without taking away the image that comes from within the reader. Illustrating other authors’ words is different than illustrating my own texts. It is a challenge to enter into their world. For my work, I often see the image first, then add the text.

The process is backward in the case of the Orion broadside project. I know nothing of the poets’ lives, except a bit of Oliver’s. They are mysteries. I only have their words and maybe some magic can happen and I can add a new feeling to the poem. I have to rely on deep intuition. That can be a gamble. But when it works, it works deep.

NT: How does poetry influence your work?

NM: Poetry reminds me to honor this place, the southernmost finger of the Salish Sea, the edge where I live in a cedar forest with twenty Band-tailed pigeons clearing off the feeder when they tumble down from the tree and sky. I have to refill the feeder with sunflower seed three times before lunch. The pregnant Douglas squirrel does her best to clean up the scattered seeds. But I am typing and doing this work of sharing indoors, a window and a wall away from the constant feeding. Poetry reminds. Art reminds. When successful, they resonate and vibrate within into practice. Poetry does that to me. It stirs me and I become a keener observer. 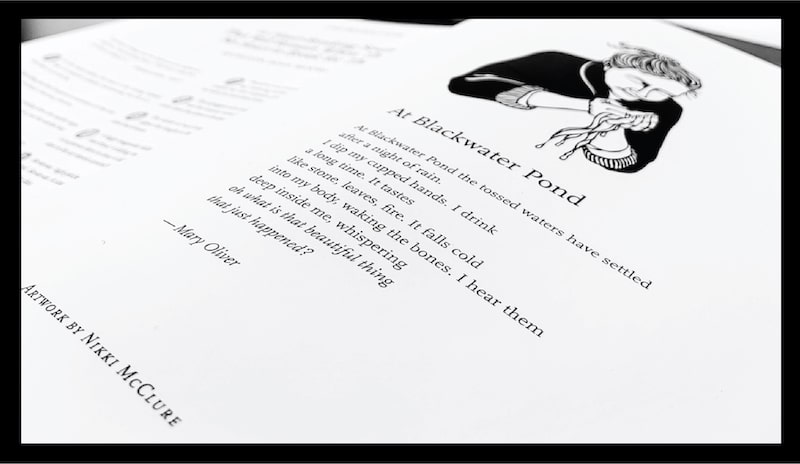 NT: What are you reading right now?

NM: Urusla K. Le Guin’s The Left Hand of Darkness, recommended by a poet who sings, Daniel Higgs. I’ve only just begun reading science fiction, to keep up with the world my son has entered. We are a long way now from Blueberries for Sal.

NT: What are three of the most influential books you’ve ever read, as it relates to understanding the human/nature relationship?

NM: Wow, this one is serious. Since I just mentioned Blueberries for Sal, I want to say Time of Wonder, also by Robert McCloskey. The line “Where do hummingbirds go in a hurricane?” strikes me as an important question for children and adult humans to wonder, to consider what is outside of themselves.

As far as our relationship to nature, my husband says I should read Edward Abbey, though I have to admit I haven’t yet. I’ll work on that. Another book is The Wheel on the School, by Meindert DeJong, which shows how a curious question, “Why are there no storks in Shora?” posed by a child, unites a community. The environment is made better and the human interactions are as well.

I’ve been thinking of Silent Spring by Rachel Carson a lot this season as I walk in the woods and see so many people with earbuds in. Will they even notice when the birds stop singing? The dawn chorus is getting quieter. Carson’s sense of urgency for the planet is something that we all need to start having. Here in Olympia, it has already been 88 degrees in mid-May. Today there are twelve American white pelicans on the beach. All migration maps do not show western Washington as part of the pelicans’ range, but this is the second year I’ve seen them here. I’ve lived here long enough to recognize this change.

Carson was direct. What book is our modern equivalent? Sandra Steingraber’s essays in Orion feel close. But what can we sound an alarm with? Food shortages? Climate refugees?  Carson did it with the loss of bird’s songs, the loss of beauty. We know our interconnectedness more than ever now, just as we have become more disconnected. No wonder I turn to children’s books. We need to raise noticers and we are failing.

“I have to rely on deep intuition. That can be a gamble. But when it works, it works deep.”

NT: What is the artist’s responsibility during a human-caused mass extinction event?

NM: Notice. Record. Interpret. Share. And do so without excess consumption in its creation. I wonder what the trees would think of what I make from their fibers and forests and streams.

Artists can navigate and help to understand. They can turn science into emotion. They can be examples of living, where creating isn’t just making stuff. Personally, I don’t know how to respond myself. Grief and despair and tears or reverence and wonder, so I just gaze out the window and watch the birds and dragonflies doing their best to keep this whole ecosystem going.

NT: Who are some artists that you think are moving the human/more-than-human conversation in generative ways?

NM: I’m not aware enough to know. I’m a bit of a hermit. I see more birds in a day than people. I don’t browse the internet; I spend enough time inside. I hope that I am helping move something good forward in my own small way.

NT: You’ve been a long-time resident of the Pacific Northwest. How does your watershed’s landscape inform your art?

NM: It is it. I’ve only ever lived here. My art would be different if I lived somewhere else and I would be different, too. My son is now a tall cedar tree and I am becoming more like a seal who watches birds and falls asleep trying to feel rocking waves. This is just the physicality of Self, the art-making part is the same. I walk every morning and things happen that spark images. I want to make pictures precise in place and time.

NT: What, in your estimation, does the visual artist have in his/her/their toolbox in response to the more-than-human world that a writer might not?

NM: Time. Writers take more time, in crafting and then in reading the words. Art can be seen in an instant. People don’t make time for more than images, a barrage of them all day long. And striking, well-made images that ignite emotion are memorable even after one has spent just seconds with it. Words sink in deep, but they take more time. Keep writing, writers! We all need to be adding our voices.

Silent Spring pertains to humans now, and we are the ones who have been silenced.