(Editor’s Note: David Gessner’s “Hurricane Diary” was featured in the Autumn 2019 issue.
As a follow-up, the author shared this update as Hurricane Dorian developed offshore.)

When I wrote my Hurricane Diary a year ago I had no idea we would have an anniversary storm here in Wilmington, North Carolina. Today I am standing out on a dock where my writing shack once stood, floating on the rising waters as I wait the arrival of Hurricane Dorian. This time I am not evacuating, whether out of inertia or overconfidence I’m not sure. One can take only so many emergencies. Scratch that. A better way to put it is that emergencies have become the norm. Ask anyone in Paradise, California or the panhandle of Florida or the Bahamas. It is a new world and this new world is relentlessly scary.  To think of the big picture is overwhelming, so let’s take it down to the small.

A year ago, after Hurricane Florence, my writing shack, where I wrote and studied the natural world, was flooded and almost floated out to sea. My neighbor snapped this picture as the water started rushing in: 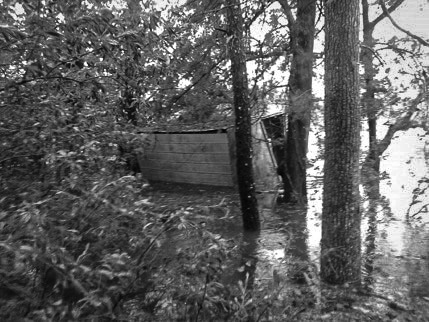 When I returned to Wilmington I happily discovered that the shack had not floated out to sea as I feared. It was battered but still standing: 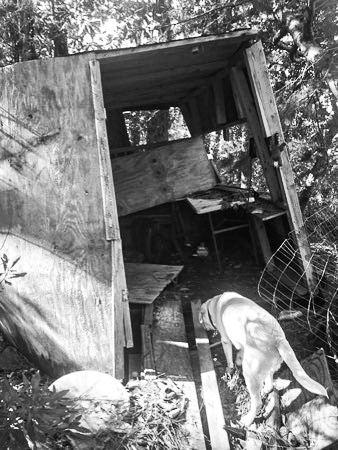 After I cleaned up the debris, I found I could still sit inside it, though it leaned like the lair of the TV Batman’s villains. Oddly, the roof remained snug: the shack lost fewer shingles than the house.

Which brings us to the house. In the larger ecosystem of disasters, never forget that some human animals smell profit. The word “gouging” usually surfaces soon after, and even during, the worst of times. I will never forget being stranded in Denver after the flights had been grounded after 9-11, only to find that the rental car companies had responded to our great communal tragedy by tripling their prices. And so it was in Wilmington after Florence. Roofers descended on town, charging unheard of rates to those who wanted to keep the water off their heads. Others descended on town with chainsaws and dreams of profit. One friend called from out of town to get a tree off his roof and when he returned was presented with an invoice for $12,500. Meanwhile the usual blather about rebuilding and how we had come together was the preferred story. There was even some bantering of the phrase, yuk, Wilmington Strong.

Our own roofers proved inept enough to leave our house uncovered during a major rainstorm. So while the insides of our house stayed dry during Florence, they were flooded two months later during Thanksgiving week. Water flowed through the roof into my study, hitting my desk and books and papers right about where my computer would have been, had I not taken it with me that day. From there the water continued down through my study floor into the space above our dining room and then finally into the dining room itself. Which meant that for us, as for so many people, the hurricane was still blowing.

When it finally goes, when it finally hits the ground, here is how it happens. The shack survived for five months after Florence but it was leaning, leaning, leaning. Sometimes I thought it was just my imagination that the angle had changed. But on February 13, 2019, I was sure of it. That was the evening my daughter snapped this picture: 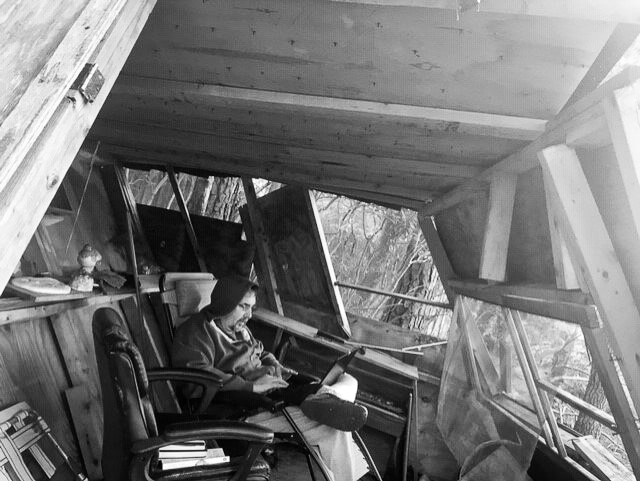 Two days later I was in the house when I heard a hard crashing noise. I chocked it up to the nightmare neighbors across the marsh who were building yet another house on their property. That night I hewed to my usual routine, walking down from the house with a book, a beer, and my journal. I turned the corner and stopped, startled. Here is what I saw: 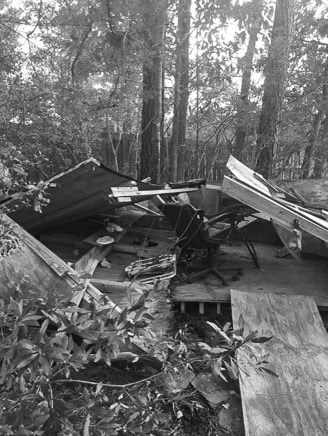 Adaptability and creativity are the keys to living on the coast in the coming times. That is what my coastal mentor, Orrin Pilkey, stresses.

He points to the efforts in New York in the wake of Sandy to buy land and then not rebuild. He mentions the architect Adam Yarinsky who won a $10,000 History Channel prize for envisioning the Manhattan of the next century as a modern Venice. His design, based on predictions of sea level, included canals running where some streets do now. Is this far-fetched? Perhaps. But perhaps we are just not looking, or thinking, with a large enough historical perspective.

As Orrin and I walked the ravaged beaches of Wilmington after Florence what he said had never been more relevant. The rise of the sea, he tells me, is nothing new. Over the last 2.5 million years or so the oceans have risen and fallen as much as five hundred feet. It is hard for my mind, for any human mind, to really understand this. We can think about where houses should or should not be built, but those are human worries, human concerns. It is hard to think beyond ourselves, beyond our time. But hard is not impossible.

There are plenty of practical reasons why our rush to live at the beaches is problematic, but one challenge is philosophical. We are not quite ready to live on land that suddenly, by the whim of tide and current and weather, might just go away. We come to the beach because we love its wildness, but then we try to impose our own terms. We try to take a fluid changing landscape and make it definite and controllable. But the place will not allow it. 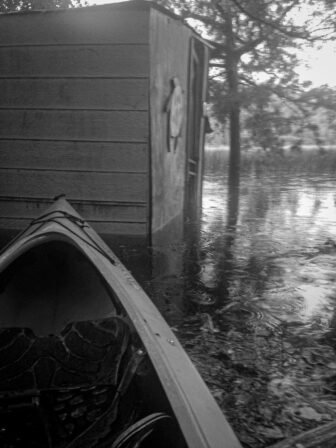 “Firm ground is not available ground,” wrote A.R. Ammons. Exactly. Consider the way a pitch pine grows, gnarled and small, leafing to leeward, adapting to constant coastal winds. This is just the sort of deal the coast asks us to strike. And to get what it offers, we must give something up.

Perhaps we must get smaller, more permeable, more shack-like. Perhaps we must learn to float, to surf. One of the true challenges of living on the coast isn’t to try and control what can’t be controlled, but to learn to live in uncertainties. This, understandably, is not an easy thing to do when an individual or family has invested hundreds of thousands, or more often now, millions of dollars in a property or home.

We can talk tough about how we will always rebuild and maybe we should. Maybe human beings are made that way, and need that sense of drive and control. But there are forces much larger than us that are at work here, and it might be worth factoring those into our thinking, as much as humanly possible.

Why? Because if we owe something to human resilience, to hope, then we also owe something to the truth. When someone bounces back from disaster we say they are tough. But there is a different sort of toughness, one that involves staring down the facts. At the moment there are some pretty scary facts to stare down. But it just so happens that they are our facts.

It requires not just adaptability but creativity to live on the coast today. I’m not sure where or when the idea of a floating shack came from. But one day I got a group of my graduate students together and we went down to the marsh by our school’s Center for Marine Science. There we salvaged a 10’ by 8’ piece of dock that had washed up there during Hurricane Florence. We lifted that dock into a truck and then wrestled it down to where the shack had been. Over the next couple of weeks I built another dock that I nailed to the one we salvaged. While the section of old dock had Styrofoam blocks below it, I didn’t want to add more Styrofoam to the new dock. But what would I use for flotation?

The answer, when it came to me. Boogie Boards. Sixteen of them, bought at the local beach shop, attached below the new section of dock. A practical, and colorful, solution. Orrin, I thought, would get a kick out of it. 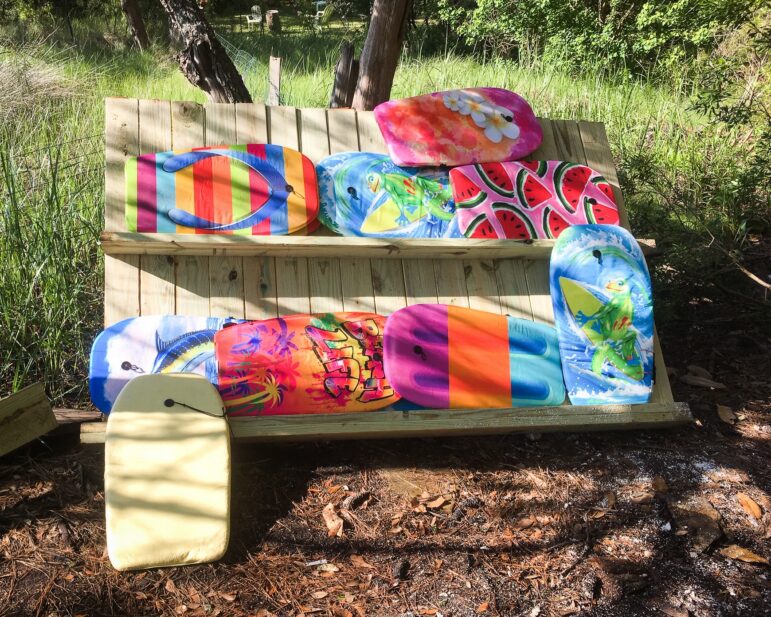 Does it work? Well, I am floating on top of it right now as Hurricane Dorian approaches. Over the last week we have had a series of king tides, extreme high tides, and the new dock has ridden high on them, the boogie boards proving their worth. True, I have not yet built my shack on top of the dock. I thought I would wait until this hurricane season passed through to do that.

There is no guarantee, of course, that the boat-shack will survive future hurricanes. At this point in my life, I realize there are no guarantees. It will be a shack that can rise on the water. A shack that, if I am so inspired, I can take for a spin, or paddle, out on the creek. A shack for the watery future. I make no claim that it will last forever.