“PRIMAVERA SILENZIOSA.” So reads the cover of the Italian edition of Rachel Carson’s Silent Spring. It sits on the desk beside me—the small built-in desk looking out on a thicket of cedars and pine—a desk with one simple drawer holding some pencils and not much else, in the cozy pine-paneled study where Carson wrote much of her landmark book during the summers of 1960 and 1961. Other foreign editions are lined up on the bookshelf too, but the Italian title grabs my attention.

“Primavera”—a singsong word evoking pasta with spring vegetables, or something related to “first.”

Granted, it’s a butchered interpretation, but “first silence” makes sense to me. The primacy of silence—and its offspring, attentiveness and awe—has been the essence of my week here on the coast of Maine, staying in Rachel Carson’s cabin. More than that, this silence, this attuned reverence, I’ve come to believe after reading her journals and soaking in her presence, is what fed Carson’s scientific curiosity. Ultimately, it was her quiet hours here by the coast, and in the piney woods, that led her to become the fierce, paradigm-shifting voice for environmental activism that she is. 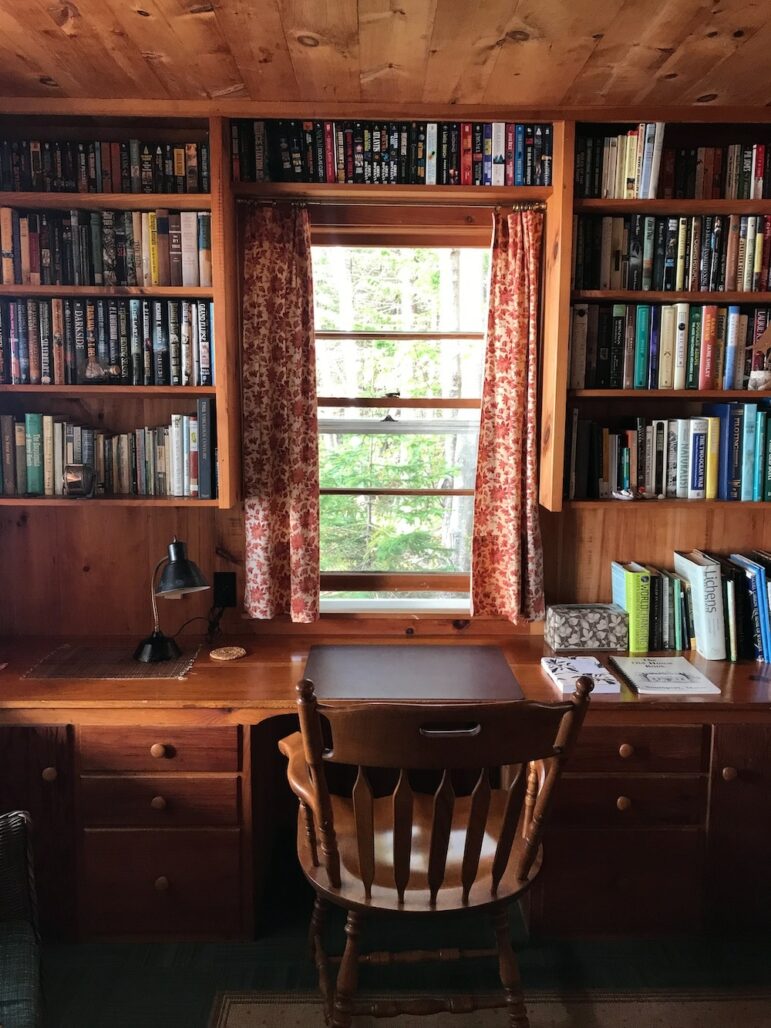 My trip to Carson’s cabin has been a pilgrimage of paying attention. I am here thanks to my friend Ann, who, after reading a New Yorker piece about Carson, followed internet crumbs to discover that her cabin is still owned by the family and can, on occasion, be rented. So we scooped up the only time available—the last week before the non-winterized cabin gets shuttered from October to May. Here we are, two old college friends, both from the Carolinas where summer refuses to relinquish its humid grasp, happy to don fleece in the brilliant fall chill and drive past Route One’s many lobster shacks to reach Southport Island, then eventually, the rutted gravel of Carson’s Lane.

The cabin is spare and perfect. Honeyed pine paneling everywhere, a main living room with a fireplace and windows fronting the Sheepscot River, a tiny kitchen with a Lilliputian 1950s oven, two cozy bedrooms off the main room, Carson’s side-porch study off her bedroom, and importantly, a well-stocked woodpile out back. That’s it.

Having read Carson’s A Sense of Wonder umpteen times, I had a clear image of the cabin’s picture window where she described watching the fog roll in. I could envision the nearby beach where she writes of taking her young nephew Roger to watch ghost crabs at night. Where they’d look up at the “misty river of the Milky Way flowing across the sky, the patterns of the constellations standing out bright and clear…” And where, she writes,

“It occurred to me that if this were a sight that could be seen once only in a century or even once in a human generation, this little headland would be thronged with spectators. But it can be seen many scores of nights in any year, and so the lights burned in the cottages and the inhabitants gave not a thought to the beauty overhead, and because they could see it almost any night, perhaps they will never see it.”

This sentence has haunted me since I first encountered it in college, and it’s why I said hell yes when Ann suggested we go to Maine. We would be a two-woman throng of spectators to this world’s everyday marvels.

Tucked away in Carson’s cabin, we savor quiet days spent listening to loons and laughing gulls, tuning in to the gentle lull of waves lapping up on the steep slope of rocks below the cabin. Silent hours spent reading Carson’s books and her letters; sitting at her desk and writing, doing my damnedest to channel her wisdom and resolve. We tend fires in her fireplace, long charred from flames she stoked. We eat simple meals on what may well have been her china, decorated with fir boughs—a naturalist’s cup-of-tea. Mornings at low tide I wander the shoreline from Deep Cove to Cozy Harbor, poking around tidal pools, marveling at the dense tiramisu of detritus washed up on these rugged shores—snail shells by the thousands, mushy tangles of seaweed, rocks bedecked with barnacles and lichen. Carson knew their biological names; I just know their beauty. 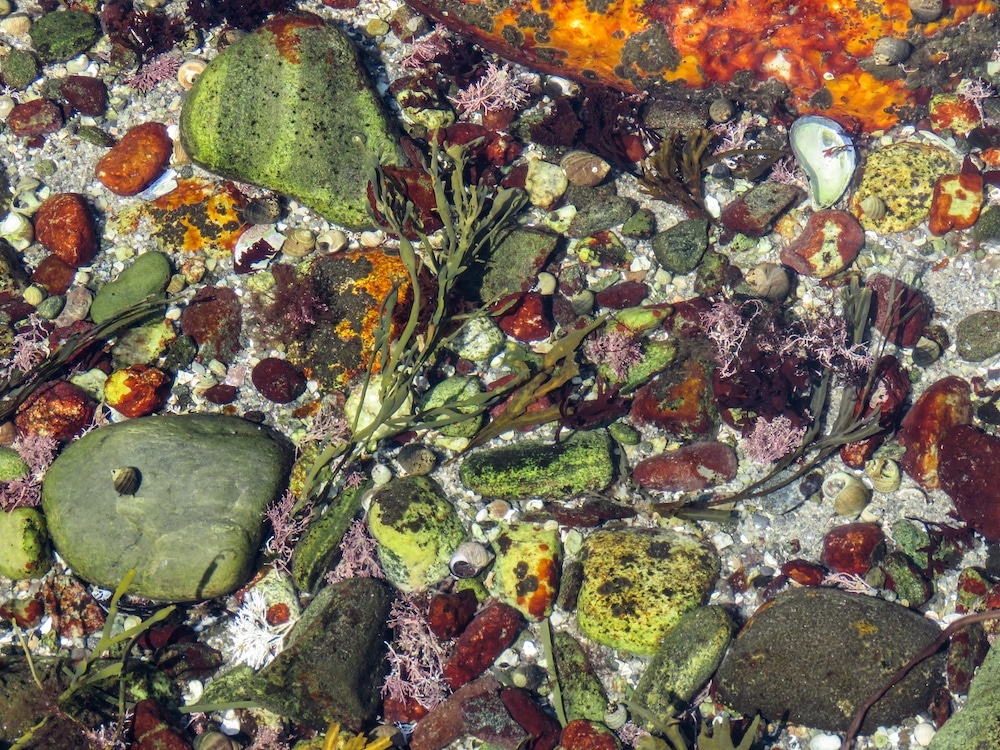 Because it is late fall, pumpkins, hay bales, and Halloween decorations abound—fitting, as I’m here to explore hallowed ground, to seek the ghost of someone who once lived here. I imagine Carson’s fingerprints lingering on these doorknobs, these pine kitchen cabinets, hoping some residual DNA will osmosis its way into me. What does it mean to inhabit a place? To habituate, “to settle in a place or habitat; to dwell in; to be present in.” To be present in. Both this place, this moss-carpeted, cedar-scented corner of Maine; this cabin built, loved, lived in by a prescient scientist with her nimble pen; and our planet, our larger shared habitat—the one under such current distress, the one Carson spent her life first loving and then trying to protect.

While many credit Silent Spring for sparking the modern environmental movement, Carson’s intent was simply to connect the dots for a public unaware that poisoning insects with DDT in turn threatens songbirds and other wildlife. Neither alarmist nor agitator by nature, she preferred her microscope to the spotlight. She’d rather meander along a pre-dawn beach than testify against big chemical companies before a Congressional hearing—though she did the latter, heroically, despite being critically ill with cancer.

Carson’s gift was combining scientific knowledge with a poet’s love of language. Her three books leading up to Silent Spring were love letters to the sea, lyrical testaments to mysteries of the deep and the minutia of marine life. Ultimately, they are about being present, about looking closely, about noticing Amphitites tucked in muddy pockets among rocks, about heeding the age-old interplay between tidal zones, about appreciating the mesmerizing, swaying aquatic forests of Laminarias (seaweed) and understanding the role they play in the larger coastal web.

In this time of escalating climate change, it is comforting to discover that little has changed at Carson’s beloved cabin. The trail leading from her front porch down to the broad brow of granite and triangle of beach below looks as it did in photos of Carson and her friend Dorothy walking down it nearly fifty years ago. The cabin’s sturdy rattan furniture and vintage floral curtains look identical to those in photos of Carson and her mother sitting by this picture window in 1956.

But as I watch the incoming tide flow into the Sheepscot, I’m distraught knowing that much has changed. Major heat waves have impacted the Gulf of Maine, affecting the lobstermen puttering along these very waterways. Ocean acidification—a direct result of greenhouse gas emissions—could lead to mass extinction of marine organisms, especially shellfish. 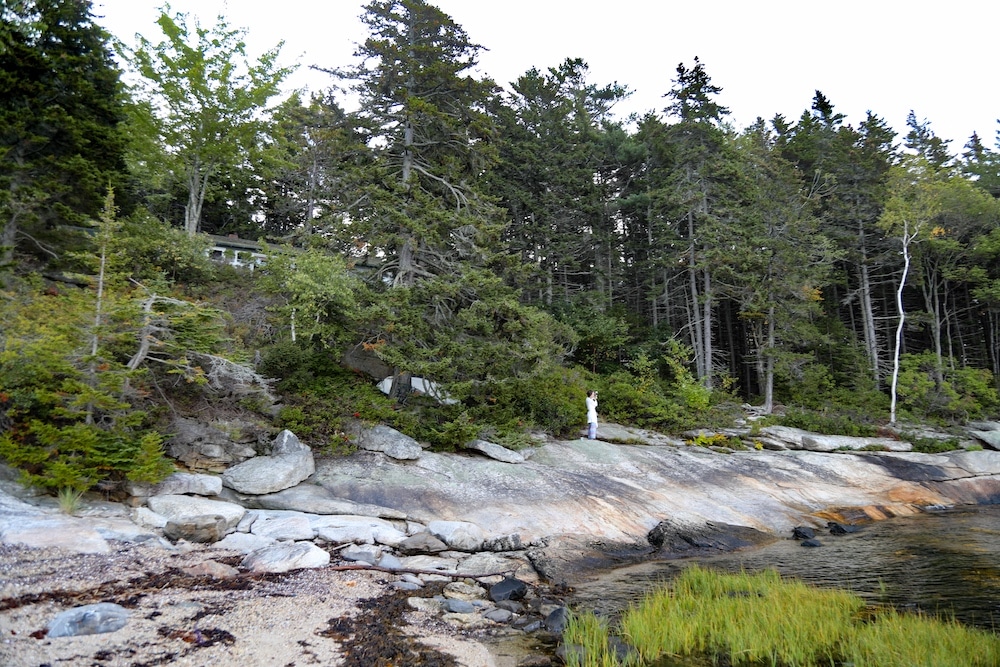 Rachel Carson was the Greta Thunberg of her day—a petite, determined woman who no one knew quite what to do with. Her fearless witness catapulted the public and government regulators into action. She was bold and emphatic, grounded in science but motivated by reverence. Her strong voice, I believe, was only possible because she first embraced the silence. In silence she heard the wood thrush. She waited and watched for geese migrating north. Her passion for the sea grew from her fascination with ghost crabs and shorebirds. It all evolved from paying attention, from “being present in.” Here on her beloved Maine perch, peering into tidal pools and observing their “many moods,” she saw her reflection—our human reflection—in its proper place, alongside wonder and mystery, alongside dingy snails and washed up Laminarias and the ebbing tidal perfume of salt rime. I see it, I sense it, too.

Carson published Silent Spring a few months before I was born, and she barely lived long enough to see its monumental impact. She was fifty-six when she died—my age now. I feel her urgency. Battling cancer, Carson knew the enormity of her deadline as she finished Silent Spring. I feel something similar with each climate change report, like I’m huddled with all of humanity in some bleak waiting room struggling to grasp a dire prognosis.

Here at Carson’s cabin, with autumn’s sunshine turning the water’s surface into a disco ball of light, I embrace the hushed coastal beauty. I am present. In this quiet I fortify myself for the work ahead, for standing with Rachel and Greta, for standing outside on the night-fallen headlands under a chandelier of stars, for standing beside the tide pools and honoring their ancient truths, for listening to the gulls call and the tides ripple, and then speaking out. First silence, then action. O

Stephanie Hunt is a freelance writer based in Charleston, SC, where she is Editor at Large for Charleston Magazine, and has published in The Washington Post, Veranda, Coastal Living, and others. She serves on the board of Charleston Moves, a bike/ped/mobility advocacy organization, and chairs the board of the Ibu Foundation, which supports global women artisans.

Judy Drew Fairchild is a passionate nature advocate and South Carolina Master Naturalist who doesn’t go anywhere without a camera and binoculars. Since COVID began, she has been making one-minute nature videos as a way to connect housebound kids (and their parents) with the wonders around us every day.