WE KNEW, going into this issue of Orion, that any conversation around racial identity and the land wouldn’t be complete without a close look at soil. It’s the material of the so-called third world, the stuff covered up by colonization, the natural element whose proximity defines social class. For all its verdancy, soil is a dark portrait of racial oppression, wet by the sweat of laborers and the blood of victims. And no thumb is more squarely on the nose of this than the Community Soil Collection Project, a roving exhibit of jars of soil collected from the sites of lynchings. The clear jars, filled with soil, take on the color of the victims whose names are labeled on the glass; viewed together, they’re a chorus, the voice of which has grown increasingly loud in the couple years since we first began planning this issue. 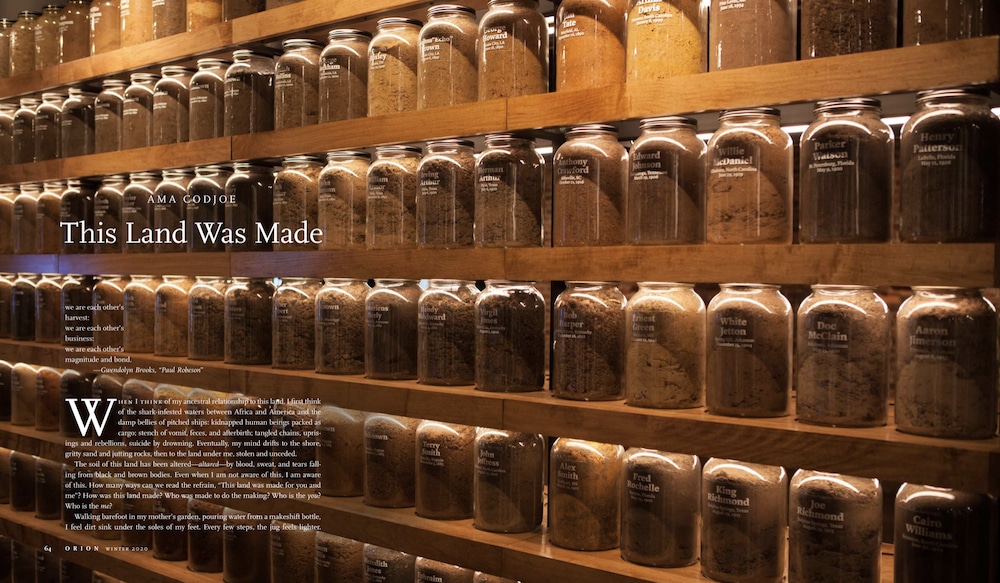 But I tend not to push writers toward trauma, and often the opposite—just write what you love and trust that that’s enough. The trauma, if it’s based in truth, will find its way in anyway. The idea of asking someone—not just someone, but a Black writer whose readers include descendants of slave owners—to face their trauma and address this particular terror at the heart of America, just felt unseemly.

Around this time, though, there was an interview in The Common with the poet Ama Codjoe, in which she encourages writers to ask themselves the following questions about their work:

Suddenly I felt very small, to imagine the fortitude of the person who holds to these standards whenever she writes.

Ama was kind enough to agree to write about soil and gardens and the Community Soil Collection Project for us. What she came up with is brave, curious, sweet, and horrifying. It’s a story of centuries of terror told in two pages, in a manner that’s both surprising and dispiritingly familiar. I don’t recommend it lightly, of course, but I do see it as a necessary work for a nature magazine, the kind of story we only can hear with one ear to the ground.