Read an excerpt from Once There Were Wolves.

CHARLOTTE MCCONAGHY’S Once There Were Wolves, set in the Scottish Highlands, follows Inti Flynn, a scientist dedicated to reintroducing wolves to their former habitat in the hopes that they will return the land to its natural state. The story extends far beyond the fate of the scientists, wolves, and locals who fear the animals’ return. McConaghy delves into the rewilding of the human heart within the bounds—and boundlessness—of language, as she implores readers to empathize, not only with each other, but with the natural world we share with all forms of plant, animal, and beast.

I talked with Charlotte about some of the choices she made in constructing this elegant and haunting novel.

Julie Carrick Dalton: Why did you choose to write about the rewilding of wolves?

Charlotte McConaghy: Wolves are extraordinary creatures. As apex predators, they’re keystone species that have a trickle-down effect on every element of their environment. By hunting the overpopulated herbivores, they allow plants and vegetation to grow, encouraging the return of all kinds of animals and insects, which in turn has an effect on water tables. This is why we say wolves can change the course of a river, or grow a forest. They’re also a creature that is hugely polarizing for humans. They seem to inspire fear and hatred, or great love, and that passionate dichotomy is fascinating to me. Along with also having incredibly varied and distinct personalities, behaviors that are courageous and surprising and mysterious . . . How could I not write about such creatures?

JCD: Why did you choose Scotland as the setting?

CM: Scotland is a very progressive country in terms of its rewilding efforts. They’re working hard to restore their landscapes to the wildly biodiverse forests they once were. But there’s still a fierce debate going on there about the notion of returning wolves to help with that rewilding effort. Conservationists see the benefits this would have on the environment, while agricultural figures fear the impact on such a densely farmed landscape. It felt like a setting ripe for a story about what might happen if the wolves were returned, full of in-built conflict and challenges. It’s also a place I personally love, having spent a little time there exploring my own Scottish heritage. I love the dramatic feel of the landscape, and its aesthetic lent itself to a slightly noir mystery about wildness in all its forms.

JCD: The practice of rewilding emerges as a theme in many ways. Inti believes she belongs in the forest, and is, in some ways, rewilding herself as she reintroduces the wolves to the Scottish Highlands. Other characters take smaller steps by rewilding plants in a garden. What do you hope readers take away?

CM: I think you’ve just outlined what I learned perfectly! That rewilding can happen on a large scale, with projects like species reintroductions, but it can also start so small that we all have the capacity to practice it. From planting flowers in our garden or on a windowsill to encourage bees and other insects, to feeding birds, housing native bees, finding somewhere to plant trees on the weekend . . . there are so many ways we can have a positive effect on our environments, and I hope that’s something that readers start to think about, because these acts are not only helpful but incredibly enjoyable, too.

JCD: It’s obvious you spent a great deal of time doing research for this book. What was your research process like?

CM: I spent many months really immersing myself in the world of wolf reintroduction projects, most specifically the Yellowstone project. I’m so grateful for all the amazing participants in those projects, from the biologists themselves to the journalists who wrote about them, for chronicling their experiences. I was blown away by the stories I read, not only of the work the scientists were doing, the difficult decisions they had to make, the new terrain they were traversing and how they felt about their interactions with wolves, but also by the stories of the individual wolves.

JCD: Your main character Inti has a rare condition called mirror-touch synesthesia, which means she feels physical sensations experienced by other people and animals. If she sees someone get hit in the face, she experiences their pain. When a wolf tears into flesh, she feels hunger and tastes warm blood in her mouth. Inti is also very in tune with the natural world around her. How does (or should) empathy play a role in the way we talk about and experience climate crisis?

CM: I think it’s the most important factor in how we move forward. This is a book that is ultimately about empathy, the power of it and the lack of it. So much of how we interact with our environment, and with each other, is informed by how readily we embrace our own capacity for empathy. Inti is someone who is born innately empathetic, to such an extent that it can actually be dangerous for her. Throughout the course of her life, having witnessed the harm that people do to both the natural world and to each other, she has closed herself off to this intense empathy. She no longer thinks the best of people, she has lost faith in them. But this is a story about how her rediscovery of empathy, of compassion and tenderness, has the power to heal, and this is something I think we can all take heart from. It’s by finding the courage to empathize with the world we can’t see—all the wild spaces and creatures that live beyond our view—that we will have any hope of tackling climate change.

CM: As I learned about wolves, I was struck by how generous and loving they are. We paint them as monsters but the truth is, they’re shy, family-oriented creatures, who are loyal to the pack and extremely unlikely to cause any harm to humans. And in my opinion, the most beautiful thing about them is the harmony and balance they have with their environment. This is something we need to adopt, and I think is the essence of rewilding ourselves.

Read an excerpt from Once There Were Wolves and purchase your copy here. 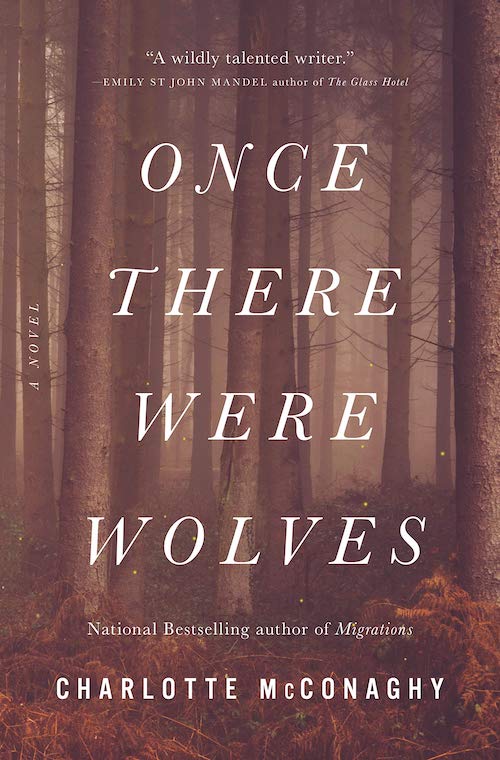 Charlotte McConaghy is the author of the novels Migrations, a national bestseller that is being translated into over twenty languages, and Once There Were Wolves. She is based in Sydney, Australia.

Julie Carrick Dalton’s debut novel, Waiting for the Night Song, was a CNN, Newsweek, Parade, and USA Today Most Anticipated 2021 book. Her second novel, The Last Beekeeper, is forthcoming. A Tin House, Bread Loaf, and GrubStreet Novel Incubator alum, Julie is mom to four kids and two dogs and she owns a small farm in rural New Hampshire.