Encounters with art and beauty on paper, screen, or in nature, from our hearts and minds to yours.

Life Between the Tides by Adam Nicolson

“The sea is not made of water,” writes English author Adam Nicolson in his wondrous new work of nonfiction, Life Between the Tides. “Creatures are its genes.” Journeying between rock pools, he reveals how each contains a universe of scuttling and frothing life utterly distinct from yet deeply connected to the world of humans, universes that have long inspired scientists and poets alike. The Greek philosopher Heraclitus saw waves crashing over rocks as a metaphor for life: “nothing is fixed and nothing certain.” Centuries later, Virginia Woolf, a writer “entranced by liquidity,” would draw inspiration from shoreline animals to create novels structured by patterns of “eddies and back-turnings.” Galileo studied the tides, as did Descartes and Newton. Charles Dickens built metaphors from mollusks. Tender and curious, this book is as much for naturalists as bibliophiles, a testament to how time spent observing that which is different from us can teach us so much about ourselves.

In the Eye of the Wild by Nastassja Martin, translated by Sophie R. Lewis

It’s humbling—and often frightening—to spend time in a place where you’re not at the top of the food chain. But for those of us who seek out the wild, this diminution of one’s self is part of the appeal. It can be an escape from your uniqueness, your humanness, even your body—and in that way like euphoria. French anthropologist Nastassja Martin has studied and lived with the Gwich’in people of Alaska and the Even people of the Kamchatka Peninsula, diving deep into the concept of animism—the blurring of lines between the human and nature. When she is mutilated and almost killed by a Kamchatka brown bear, the act becomes, in her unfolding of events, fated. Two spirits are irrevocably drawn to one another in a violent embrace and then hybridize. To the Even, she becomes a medka: half human and half bear. In the Eye of the Wild documents this physical and psychological metamorphosis. The book had me on the edge of my seat like Werner Herzog’s Grizzly Man, but the nervous anticipation I felt was much different. Both Treadwell and Martin are searching for something dangerously larger and more powerful than themselves. But only Martin left me wondering how our relationship with the wild begins and ends. “Bring what you have” is the invitation that David Whyte offers in his new book of poetry and narratives, Still Possible. The collection takes a moment to engage with the wisdom that comes from the passage of time and the experience of all that dwells within that invisible and almost ineffable dimension of the universe. In a moment born of increased isolation and separation from the flow that our established lives hold, Whyte’s book asks me to delve into my relationship with silence and with contemplation, reminding me that I need not make “new declarations” about my intentions to grow and find my way. That the direction I choose to walk carries enough profundity to teach me if I but take a moment to listen. I invite you to do the same on your daily pilgrimage through life; and may his words be good companions on your journey.

I’m late to the party reading this captivating work of nonfiction from Harari, whose dry humor and expansive knowledge of human history and sociology make it a stalwart on my bedside table. Moving through the busy blip of human existence, Harari ruminates on Homo sapiens’s walk through natural history as the species evolved, deconstructing readers’ understanding of our own evolution. (A part that I can’t shake: Harari’s argument that people were domesticated, over time, by wheat.) If you want an overview of our triumphs, failings, and movements in and in spite of the natural world, Sapiens is a must-read. 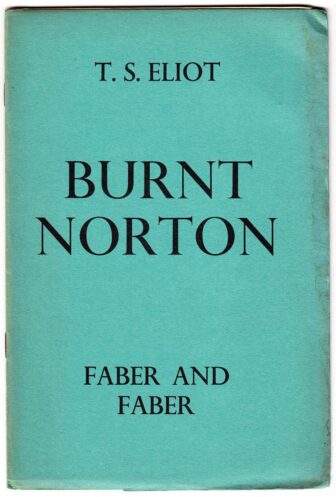 There is a mourning dove who watches me through my window. Each day, I greet her. I peer onto the fire escape and wait for her to make eye contact and send me on my way. It’s become a habit, bordering on superstition. One afternoon, at a photography exhibition that I did not enjoy, I read a quote from T. S. Eliot’s poem “Burnt Norton.” It was plastered on the wall of the gray gallery.

The words had me thinking about time and dwelling. They brought to mind my dove, who draws me in each morning with a mournful call so close to the word come, before telling me to “go, go, go,” into my day, reminding me of Eliot’s next lines:

“Time past and time future

Point to one end, which is always present.” 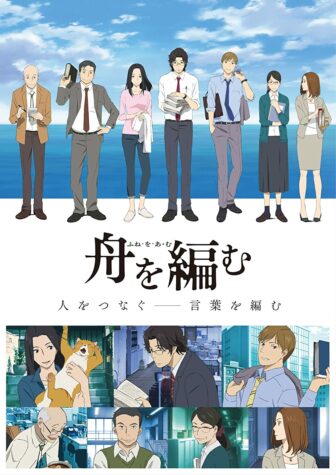 It’s called The Great Passage in English. I prefer the Japanese title 舟を編む (Fune wo Amu), which I guess would literally be translated as something like “weaving a boat.” Partly, I like the Japanese title because it has the boat character 舟, which kind of reminds me of the sail of a boat, which then reminds me of someone sometime ago who was perhaps looking at the cracks in a burned turtle shell trying to pull meaning from it to understand messages from the heavens. Partly, I like it because “weaving a boat” conjures up in me an image of deliberately crafting some vessel to care for and carry some select things through the vast unknown obstacles that one might encounter voyaging on the sea. Only so many things can fit in a boat, no matter how well woven. I encountered this work in what I believe is its second adaptation (it was originally a book by Shion Miura, adapted to a film and then adapted as this anime television series). It’s about a dictionary editorial team and their work together to create a new dictionary. I think it’s a worthwhile watch because it is also about weaving a boat and what sensibilities, sensitivities, and silly asides are nestled in the hull as we sail about to see. 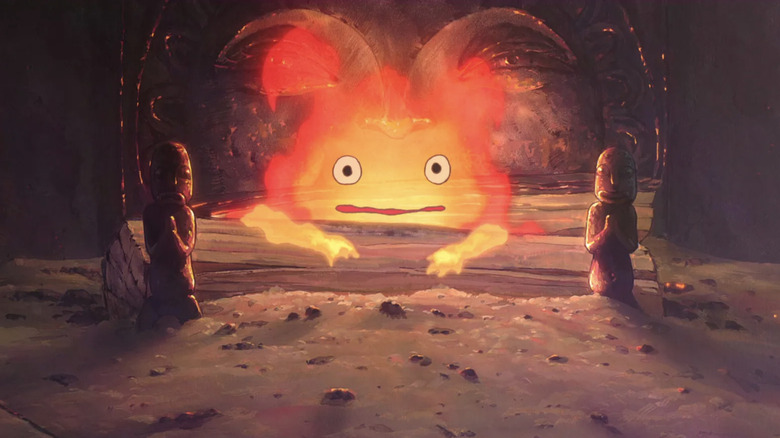 After watching Howl’s Moving Castle, Hayao Miyazaki’s inquiry into the coexistence of machine and nature, my daughters and I clicked around the HBO app and were brought to this mesmerizing yule log. Calcifer, the chummy fire demon at the heart of the castle, here turns into a thirty-minute loop of wobbly flames whose roving fish eyes take in everything. There’s no dialogue, no context, just a disarming orange spirit bearing witness to your little world without judgment. We stared back in silence for several minutes, and the room felt warmer afterward. Last year I went down to the Flathead River one blustery day in early May. I was hoping to bottle spring—its ionic swirl of rushing water, sun-warmed stones, and the new green leaves of sleepy trees, just yawning awake. Most of all I was after the intoxicating scent of bleeding cottonwood buds, earthy and sweet. It is slow, sticky work, clipping these buds one by one from each articulated branch. It cannot be rushed. It may take hours to fill a single jar with their carmine sheen. Back home I poured good olive oil over my quarry, sealed the container, and put it out of sight—for this part, too, cannot be rushed. This alchemy requires time. That December, with snow in the air, I strained and heated the oil, watched a lump of golden beeswax soften, churn, and diffuse. The result? A line of small black-capped jars. A salve for chapped hands and cheeks. The breath and promise of spring. 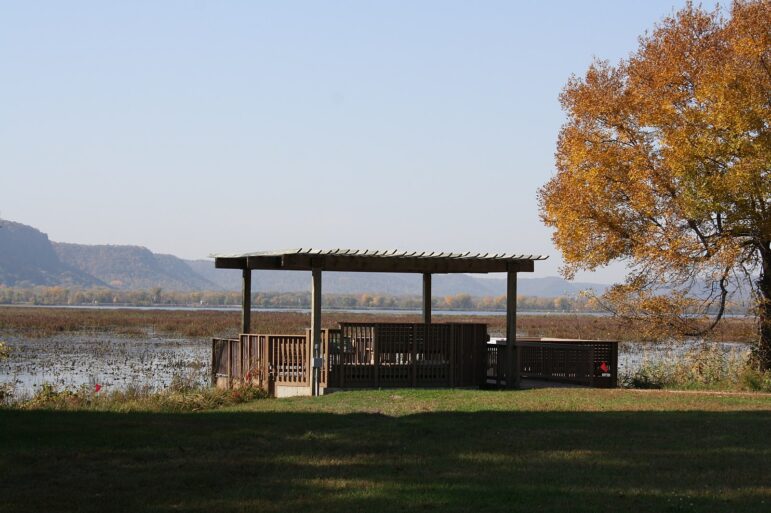 I visit the Mississippi Flyway when I can, most recently at the Trempealeau National Wildlife Refuge. This stretch of land, like other such areas reserved for animals, also offers respite for human souls seeking. Here, along the currently frozen Mississippi and its backwaters, is a busy passage for north-bound birds: a hyperdrive of wood ducks, a lone blue heron, trumpeter swans like fletching on an arrow of geese cutting cloud—a victory of winter. From a dark hardwood tangle, a barred owl questions. Eagles fish ice and nest in tree bends. Cardinals color the drab camouflage of early spring with a flash of song and wing. Last fall, I watched thousands of white pelicans wade here in water lilies, their expandable pouches backlit by sun and silhouetting small fish they scooped from the shallows. For such spans, cares of the day drift and I am reminded of the gift of sanctuary, of passing through, for the nourishment of water, sand prairies, bottomland savannas, this fleet of time winging past, the space to hold that thing with feathers.