IN MY YOUTH, I escaped my father’s meanness by retreating to the woods that capped our dead-end New Jersey street. In the days before helicopter parenting—in days when often I parented myself—I wandered the trails and spent hours flipping over felled logs to uncover what swirled in the earth beneath: centipedes and segmented wood lice, carpenter ants and ground beetles so black their armor shone in the midday sun. At the mouth of drainage pipes, I leaned over as far as I could to spy a bullfrog blinking through mud. Later, as a teen, I knew those woods so well that I once outran the police in them while they chased me in the dark. Hanging out in the woods passed for a crime in suburbia. Had their bobbing flashlights caught a glimpse of my 16-year-old face, they’d have seen a young woman smug with nature.

My father grew up on Crete, the Greek island that stretches low in the Aegean like a child’s drawing of a cat. In his village, he too was flooded with nature: walls crawled with bougainvillea; grapes wrapped the trellises of every home; and the blue, blue sea yawned half an hour away. When he was in a fine mood, he told me stories of catching octopuses by hand or the joy he felt when sucking the candied nectar of a honeysuckle.

But more often when I think of my father, he appears how I experienced him as a child: a looming tower of dread, a man capable of such intense abuse it seems impossible he ever knew joy.

Some children exposed to long-term trauma develop complex post-traumatic stress disorder (CPTSD) as adults. I am one such adult. When my CPTSD is activated, I feel it first in the body: in limbs gone heavy and breathing turned shallow. I have read all the books I can on the subject. I know to pay attention to my breath, to practice mindfulness, to meditate. Those tricks work sometimes, but nothing centers me again as much as being in nature.

Two years ago, I signed up to mentor a child through Big Brother Big Sisters. The odd gift of trauma is it teaches you resilience, and I wanted to pass on that strength to a girl in need. I was paired with a preteen I’ll call M. We bonded quickly over horror movies and our love of the color red. M had a terrific baritone laugh, and about twelve seconds into our first meeting, I vowed to take a bullet for her.

One afternoon when M and I were scheduled to hang out, my CPTSD flared. I wanted to cancel, but consistency is important for vulnerable children, so I put her needs before my own and slid into a pair of jeans.

A few hours later, we sat on a wrought-iron bench with cups of ice cream when, a couple bites in, M told me about a man who touched her when she was very young. The weight of her confession settled on my already heavy bones. I said all the right things, dropped her off, and reported it. Afterward, I wept and shook.

The following week I drove us to the nature preserve—a swath of old-growth wetlands that I often center myself in. I wasn’t sure M would enjoy it; it wasn’t the arcade or trampoline park, but the trails were dappled with the colorful fall leaves of sweet gums, sugar maples, and tulip trees. I took a walking stick from the rack, and behind me, M did the same.

The odd gift of trauma is it teaches you resilience, and I wanted to pass on that strength to a girl in need.

On the trail, I paused. “Look,” I said and pointed. “Oyster mushrooms.” I gently poked one to feel it spring back. M poked it, too.

“I love red leaves,” she said and pulled one from the ground, tucking it into her own brassy hair.

“You look fabulous, dah-ling,” I said, and she giggled. She loves pretending we’re fancy.

A little over a mile later, we were far from anyone else—far from the men who’d hurt us. We stood beneath a canopy of leaves and turned our attention to the lean body of a fallen poplar.

“Well, it’s dead, right?” She jabbed the woody pulp of its core.

“Yeah, but it keeps on living. It’s feeding that moss and those mushrooms. Not to mention all the insects we can’t see.” M pressed her lips together—her thinking look.

“Well, like, if we yell something out here, can we be here forever?”

I smiled. “Definitely. What should we yell?” I asked and added another leaf to her hair.

M ran ten feet ahead of me and raised her stick overhead with both hands. She turned her face skyward and shouted, “We will always be here!”

When she finished, she looked at me, which meant it was my turn, so I did the same. We finished the trail in silence.

As we walked back to the car, I imagined all that M was going home to: a house of chaos, a house in which her needs are rarely met. I thought of my own childhood home, too: the ranch house my father filled with rage; the place where I took up as little space as I could to stay out of his way.

I looked over at M in the passenger seat. With her crown of leaves, she looked to me like a child born of those woods. She looked like I had when I was young. I noticed how deep my own breath was—belly breaths so different from those of CPTSD—and the lightness of my body. I knew then that M would be mostly okay, just like I am mostly okay, and even though we’ll both face difficult times, part of us will live forever in those woods. 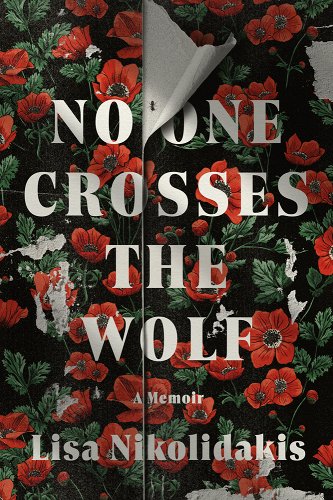 Lisa Nikolidakis holds a PhD in creative writing from Florida State University and is an associate professor of creative writing and faculty adviser of P.R.I.D.E. She writes nonfiction and fiction, returning often to themes of trauma, mental health, chronic illness, music, and nature. Her essay “Family Tradition” was selected by Jonathan Franzen for inclusion in The Best American Essays 2016. Other writing of hers has won various prizes and mentions, including the Annie Dillard Prize for Creative Nonfiction 2021, Gulf Coast Prize, Indiana Review’s Fiction Prize, the Tobias Wolff Award for Fiction, the Calvino Prize, Hunger Mountain’s Frank Mosher Short Fiction Prize, and others. Her aim is to help demystify the shame of trauma by continuing to write and speak publicly about it. Her memoir, No One Crosses the Wolf, is just out from Little A.

Pick up a copy of Lisa’s new memoir No One Cross the Wolf here.