HAVE YOU EVER GIVEN your whole body to a people? There are people who know the paradise of my affection—whose mothers smell like clay. People who remember me. I won’t be taken down for Prospect Park, for new roads and homes. I am a home to them.

In my knotted side, I know virus and antidote, club and bowl—destruction and restitution. We know the power of a lightning bolt enough to revere it, to pray to it, and sometimes, to pray for it.

What my people know of me is that I listen. It’s enough sometimes—to listen. I hold the story of the first fire. I hold every generation of women, every matriarch and healer. My apex reaches beyond the fog each morning, and I can see their small lives, chimneys and smoke. I can see, sometimes, children who are as much a testimony to survival as me.

I don’t want to know this floodplain barren. My people know when I go—we go—it’s why the women hand-drum Remember me, remember me.

I can say forever and mean it. I can hold a woman above and beneath me. The seed of me belongs to the woman who planted it, who put me in the ground, encircled by women who came before her, who are seeded to roots that stretch toward me.

The women and I know vanishment—what it’s like to be untethered and unburied. There are many wrong ways to die. The right way to live, in this world, is to be rooted here. I never want to leave. I want so desperately to stay in soundless being, watching over the people. I’d like to know my own decay and to be revived again, untouched by the ways of white men.

The women wish that too. The women need that too. Forever is a foreign land to everything but trees. What can’t you know in the dominion of roots? What can’t a woman do, restored by me?

In a deep grief, a woman weaves a crown of harvested root for her own head. A woman weaves a basket and paints herself red. A woman puts down her tobacco and tells a story at my base like a conjuring and asks me for strength.

I can give it. I speak in stillness.

The woman can’t let go, like me. She’s tired and hollow, sinking into the undertow of something beyond me. She knows instinctively to touch the earth, and strength rises out and in like life does, and between us, every visit is a blessing. A woman knows surging power.

Relationality is to give grace that crosses one body to another. What is it like to be born from grace and to die beneath it, memorialized in canoe and river, spirit and song. I want to be a paddle that sinks soft and rhythmic in the water.

To vanish the grief of a young death in her community, a woman breaks down the bad medicine of white monuments and tells her daughter that warriors don’t fight as much as they are willing to die for some things.

“You know?” She points at me as if I’m a religion—a culture—good medicine worth fighting for.

The daughter nods and plants sticky fingers on me.

“If they tell you you’re nothing, don’t listen.”

They plant a new sister. The woman tells her daughter, “If you ever feel weak, come here. Touch the ground.”

It’s in the girl to think she’ll never need to. In time, she’ll be here. She’ll make a practice of remembering, as her mother did before her.

Now, though, it hurts her mother to hold her gaze—only a tree could understand the sorrow of time and history any deeper, her mother thinks. She couldn’t mourn her mother until she became one. In every finger, wrapped around her index, she remembers a love that rests now in me.

The girl looks like her mother in thirty years. She takes a bough to smell its green. The women live so long beneath me and above. My perch is strange and all over like the best energies.

If I could give my body to a people in one generation, it would be enough, but eight generations of women have celebrated me and pared down my life and given me such clarity and mission, I don’t know a body without a people to receive it.

And they say Jesus is a martyr. What of me? Restoring each day—sleeping each winter, waking up to harvest and flora and fractal life, and daughters who are red in the medicine wheel and their love is so far reaching I can barely contain my hope with each new lifting sun.

I belong to warriors. My rust on their sleeves. My bark on their backs. A grandmother boils cedar tea to fill the house, to clear every throat. The song that comes belongs to me. What fills the house is me. Each woman, a monument to root and quietude and all medicine. What does it mean to never die, to give my body to a people, and to receive so much?

What does it mean that the grandmother used to be a girl who kept cedar in her pillow at the boarding school? When they called her number, three, she stood at attention, scared for her body and future. It would be ten long years of that, and when she could walk in her own skin, with her own prayers, she came back to me. What would it mean, had I not been there to receive her? What kind of pain would that have been?

This is an excerpt from
Old Growth: The best writing about trees from Orion magazine. 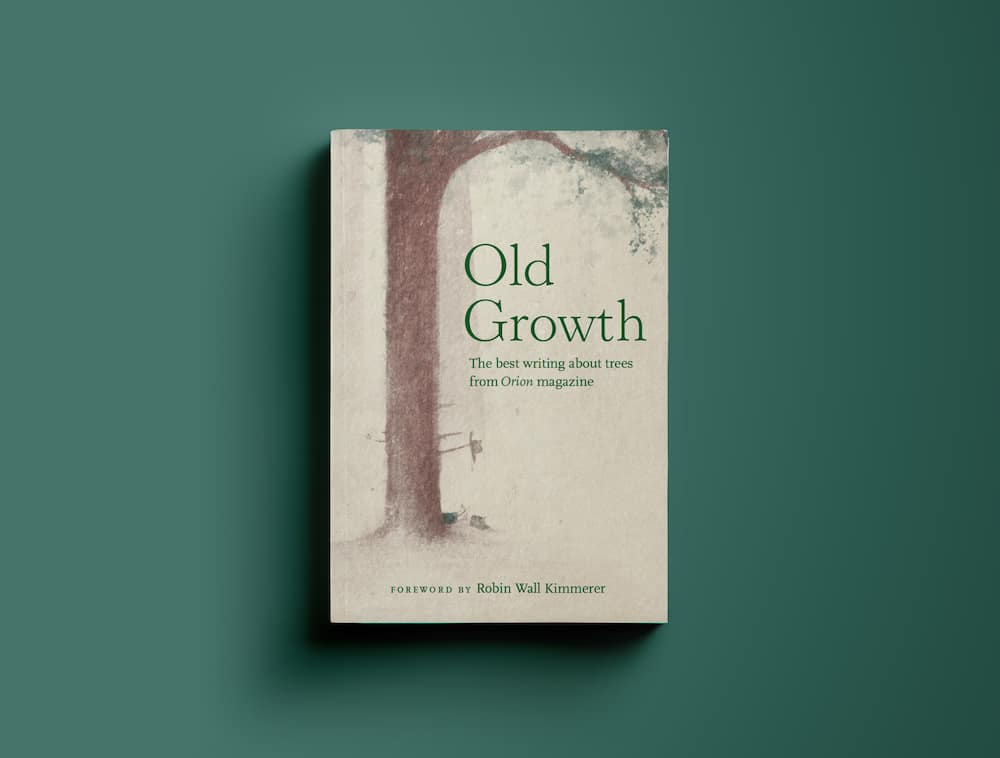