THE SWAHILI PHRASE zeru zeru translates to “ghost people” and in Tanzania refers to one of every fourteen hundred citizens with albinism. The phrase is both descriptive and prophetic, as much a metaphor for the white skin resulting from the condition’s absence of melanin as it is a reflection of societal treatment. From the beginning of their lives, people with albinism are insulted, mocked, harassed, and isolated. When they are killed in this part of the world, their bodies are often never recovered. Like ghosts, they disappear. 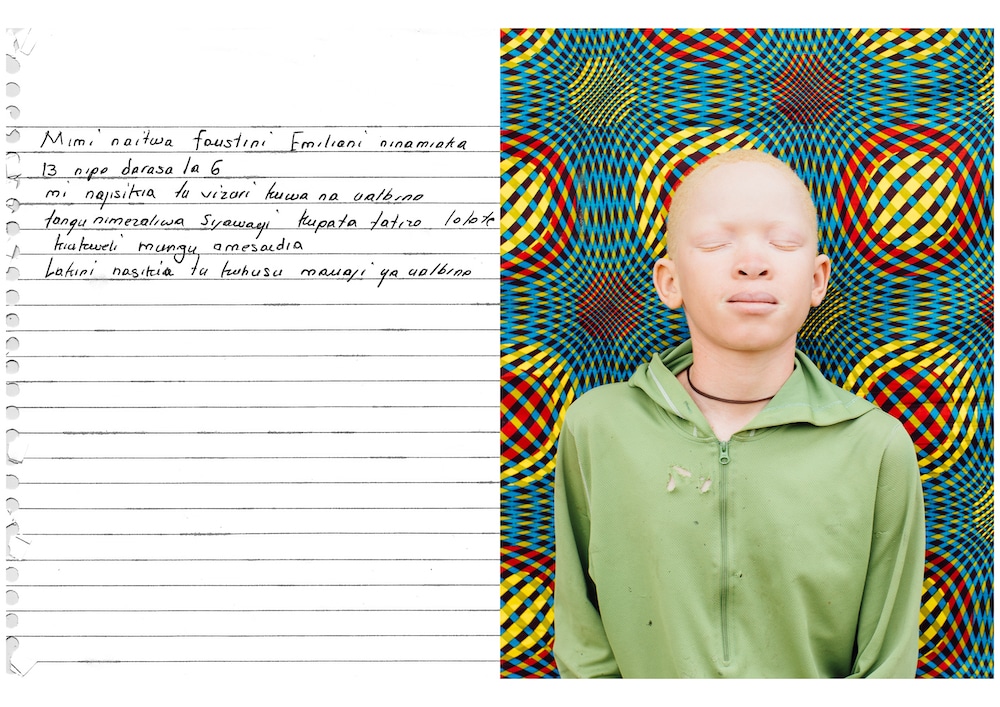 I am in Standard Six. I just feel good to have albinism. From the time when I was born I have never had any problem, God has helped me indeed. Nevertheless, I hear news about killings of people with albinism. 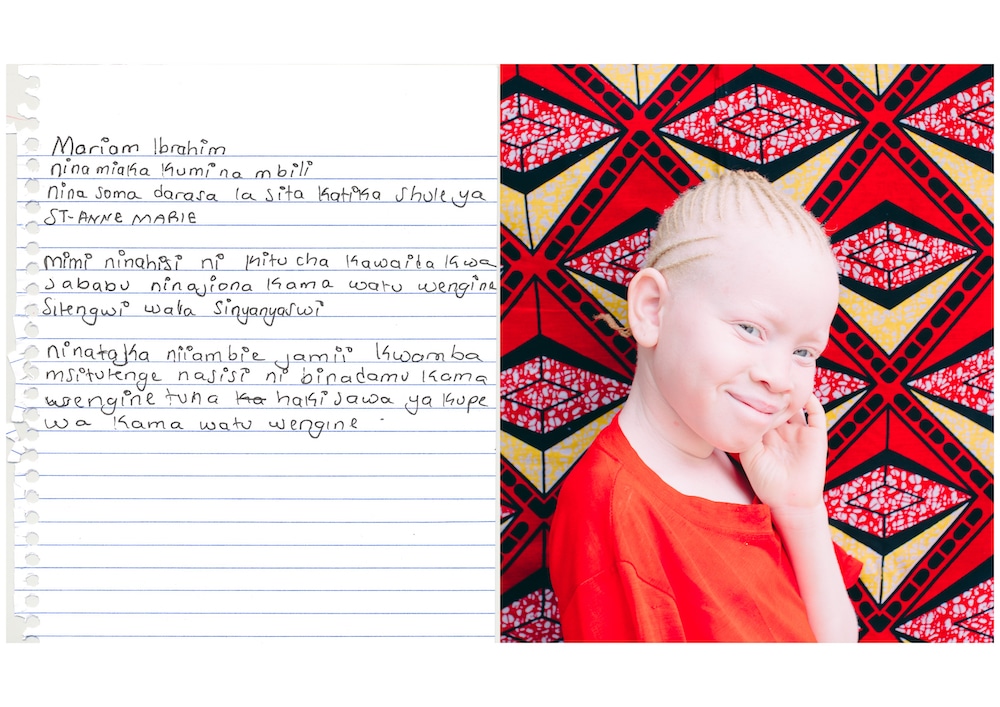 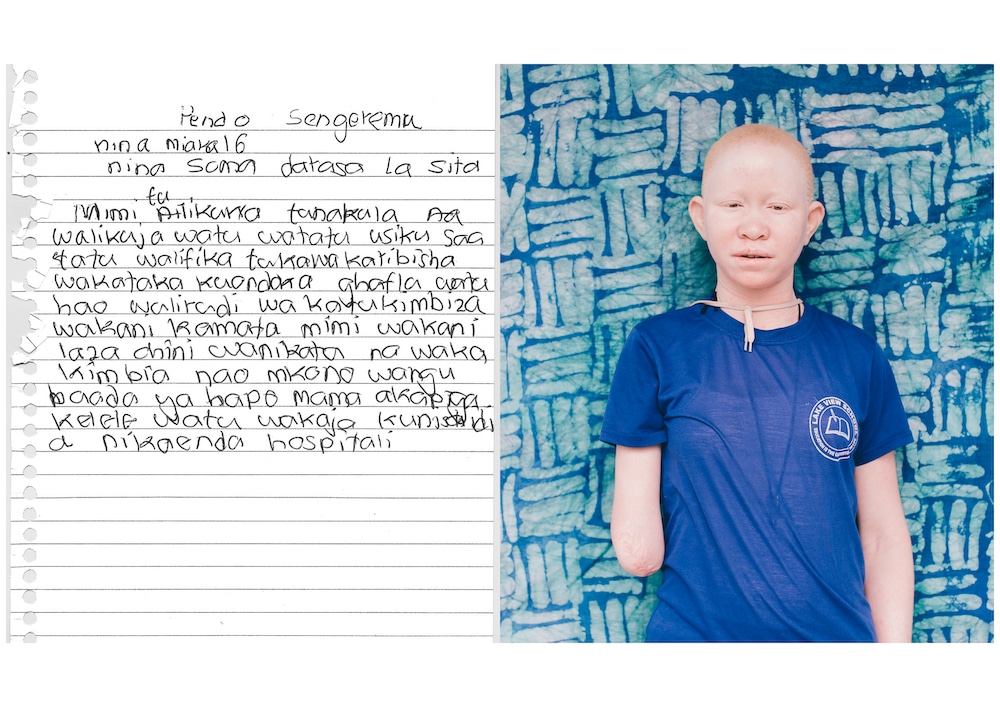 It was 9 a.m. and we were having our dinner, then three strangers came and we welcomed them, but immediately they asked to leave. Suddenly, those people came back and started chasing us. They caught me and pinned me down and chopped off my arm and ran away with it. Then my mother started screaming and neighbors came to help and took me to the hospital.

Throughout Dar es Salaam, the Lake Victoria region, and Zanzibar, people with albinism face a prejudice that excludes them from equal human rights. Many are unable to find employment because their condition is viewed as a disability, one that makes them less competent. One young man I met dreamed of joining a professional soccer league, but no one would allow him on their team because they felt he’d be a bad omen. Another individual was expelled from Catholic school on the basis that the church would never welcome a priest with albinism. Incalculable persecution falls on children, who endure years of bullying from schoolmates and peers. 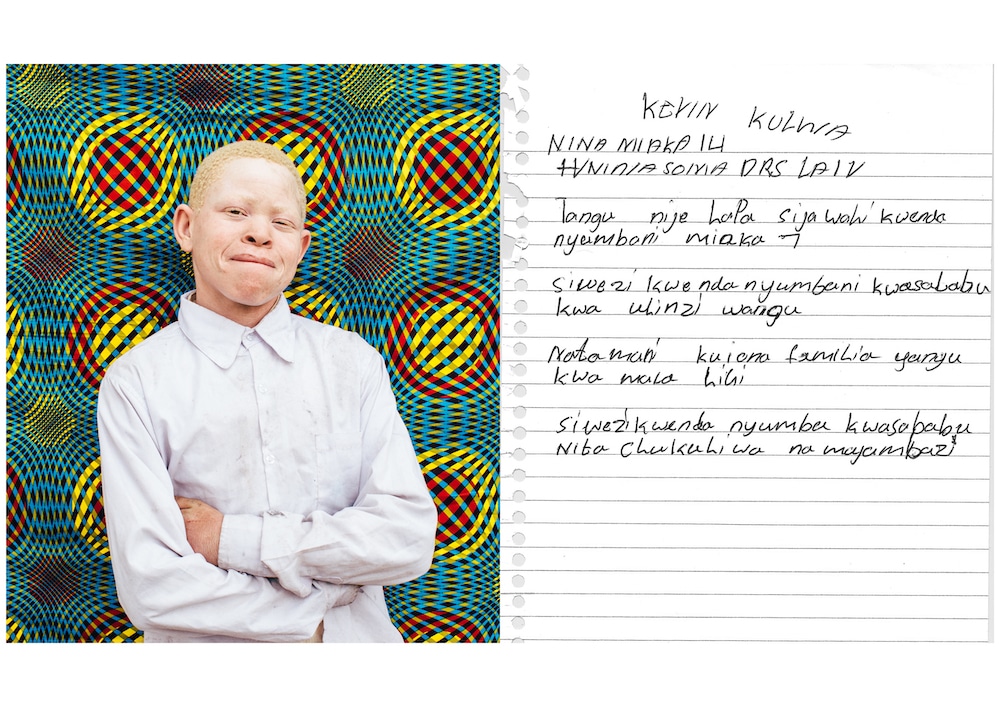 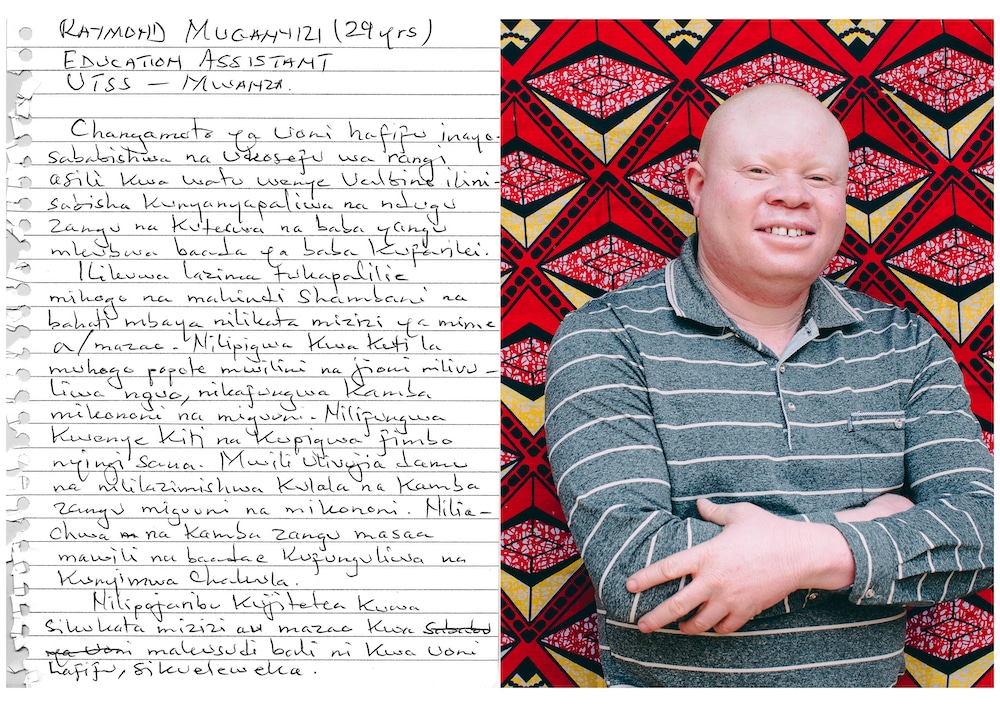 Education Assistant—UTSS Mwanza. The challenge of low vision which is caused by lack of pigmentation to people with albinism was the reason for being a target of discrimination by my relatives. After my father died I was abused by my uncle. It was mandatory for me to tend to our cassava and corn farm and often it happened that I accidentally would cut the roots of the plants. I would be beaten with sticks all over my body and in the evening I would be stripped naked and they would tie my arms and feet using a rope. Then I would be tied to an anchor and beaten without mercy. My whole body would be covered with blood and I would be left that way for nearly two hours. Then they would untie me and my uncle would not allow me to eat dinner that night. They did not want to listen when I tried to prove that I did not cut the roots or crops intentionally but it was because of my low vision.

Albinism suffers a violent affiliation with witchcraft in Tanzanian culture, with some claiming the condition is a curse to be stamped out and others claiming AIDS can be cured by having sex with a woman with albinism. A widespread belief is that body parts taken from people with albinism can be made into potions— “Albino elixirs”—that bring about good fortune or wealth. These kinds of misconceptions manifest a constant and overwhelming threat to the lives of those with albinism. Individuals are abducted, dismembered, and sold on the black market for commerce and occult ritual. The body of a person with albinism can sell for over $75,000, more than ten years’ wages for many Tanzanians. Such a thin fabric, a single layer of skin, precludes an entire population from dignity and the right to live without fear, turning them into nothing more than game. 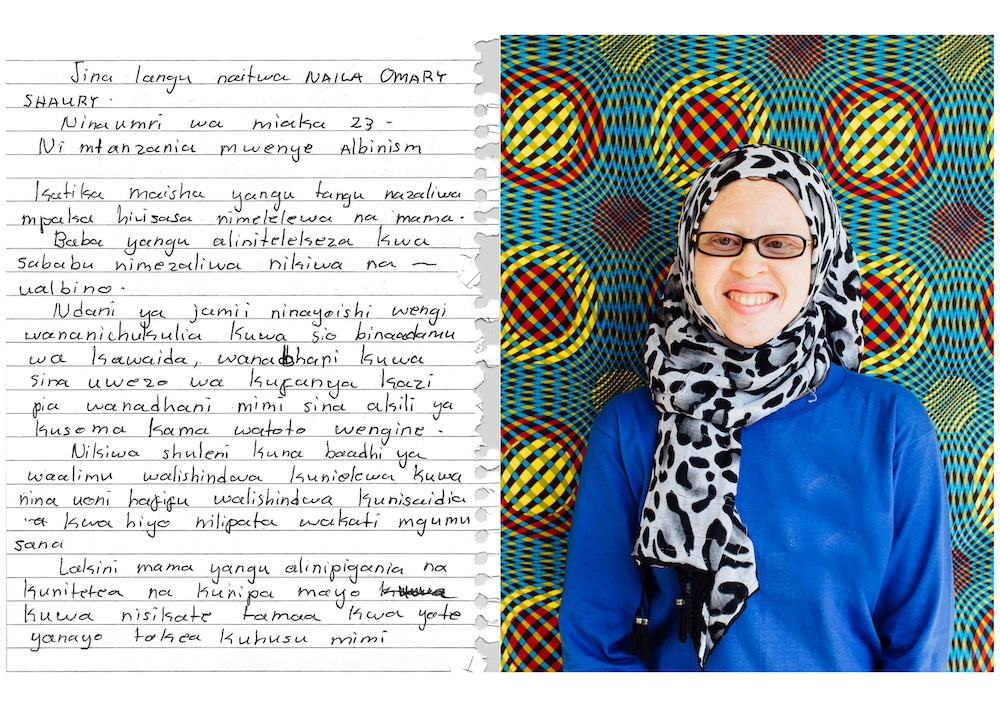 I am a Tanzanian with albinism. In my life, ever since I was born I have been raised by my single mother alone. My father abandoned me because I was born with albinism. In the community that I live in, many people consider me not a normal human being. They think I am unable to do work and they thought I don’t have the brains to study as other children do. When I was in school there were some teachers who didn’t understand that I have a challenge of low vision, they couldn’t help me and so I went through a very hard time. But my mother struggled for me and supported me and gave me hope, that I should never give up for all the things that happen to me. 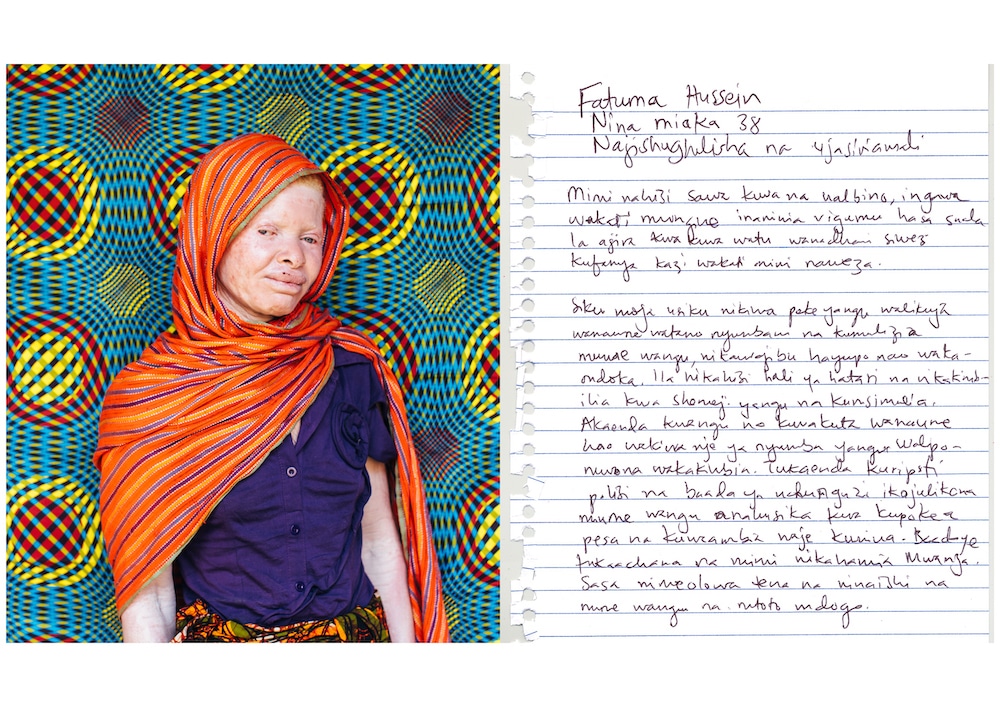 I feel normal to have albinism but sometimes it is especially difficult to obtain a job. People think I am incapable while the truth is that I can do almost anything. One day I was alone at home and three men came and asked for my husband. I told them he was away on a work trip. Suddenly, I had a feeling that something did not feel right, so I ran to my brother-in-law’s home which happened to be nearby and I told him of the incident. He went to my home and found three men waiting outside my house. When they saw him, they fled. We went to report to the police and through the investigation they discovered that my husband was also involved. He had allegedly sold me to the thugs so that they could kidnap and kill me for money. He was arrested but later released. My brother-in-law helped me prepare everything to divorce my previous husband. We are now separated and I was able to escape to Mwanza where I brought my children for a new life and have now remarried.

Through a collaboration with the organization Under the Same Sun, this project documents fifty Tanzanians with albinism. Portraits of individuals I photographed were displayed in a public exhibit along with these handwritten personal stories. Many of these stories provide brief biographies: occupations, educations, goals. Scolastica Masanja hopes to become an international sprinter. Others share the challenges they’ve faced from albinism. One boy, Emmanuel Festo, draws a picture of the attack during which his arm was amputated and stolen. 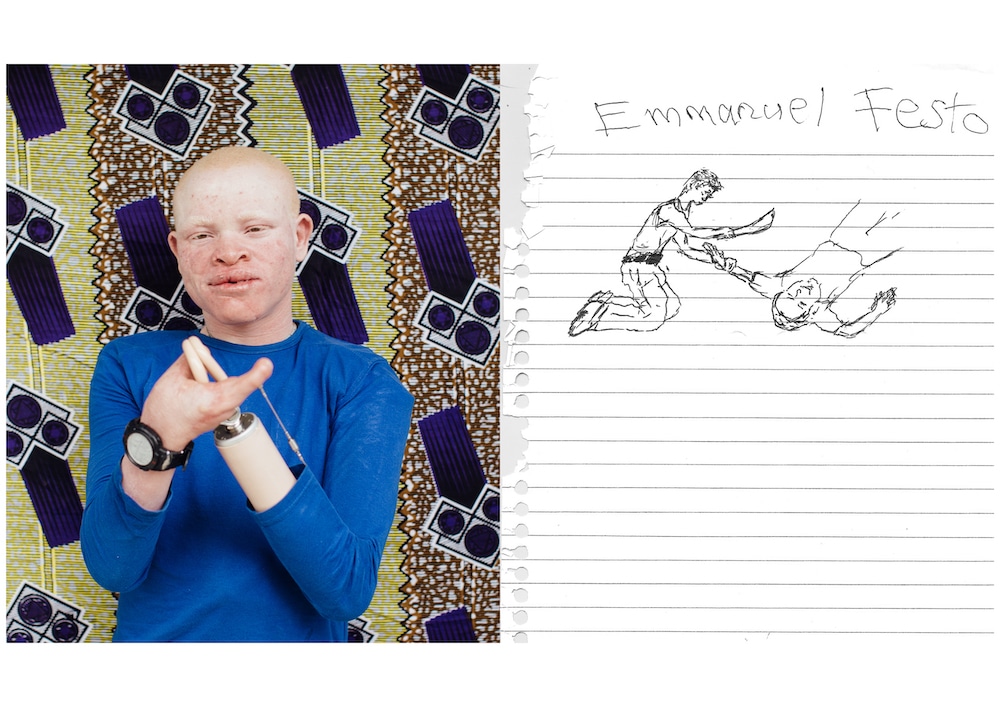 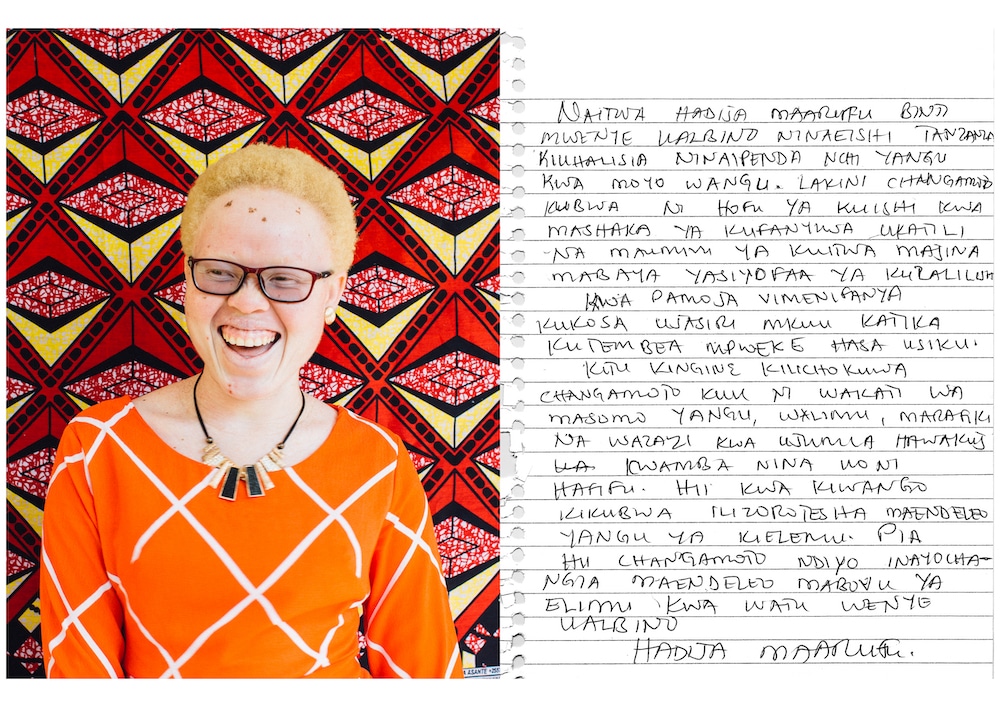 I am a girl with albinism who lives in Tanzania. Obviously I love my country with all my heart. But the biggest challenge is fear and living with anxiety that you can be a subject of violence and the pain of being called bad and discriminating names. Both of these things have deprived my confidence of walking alone especially during the night. Another thing that was a major issue happened during my studies; teachers, friends and parents in general didn’t know that I have low vision. For the most part, this deteriorated my educational performance. Also, this challenge is the one that contributes to poor educational performance of people with albinism.

The common thread through each story, however long or short, is human voice. Here, participants have the opportunity to present themselves, one of many rights not given by a society that strips them of their humanity. Distributed throughout Tanzanian villages, schools, community spaces, bus stops, boats, tuk tuks, and markets, the portraits and stories collected by this project help to educate Tanzanian citizens about the truths of albinism. Audiences are afforded a moment of direct connection with the subject, and the subject is afforded a voice in that connection. Between the camera and each colorful backdrop, a face. Behind every face, a spirit, stepping out. O 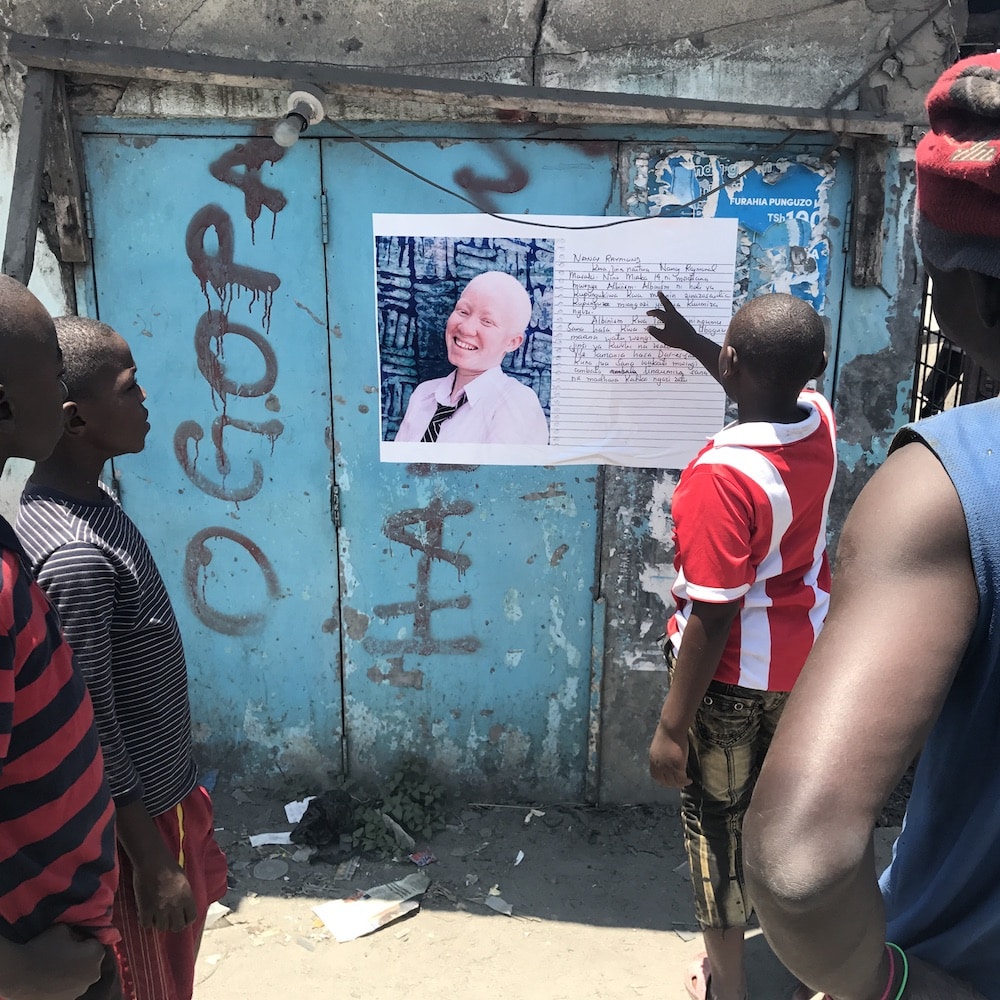 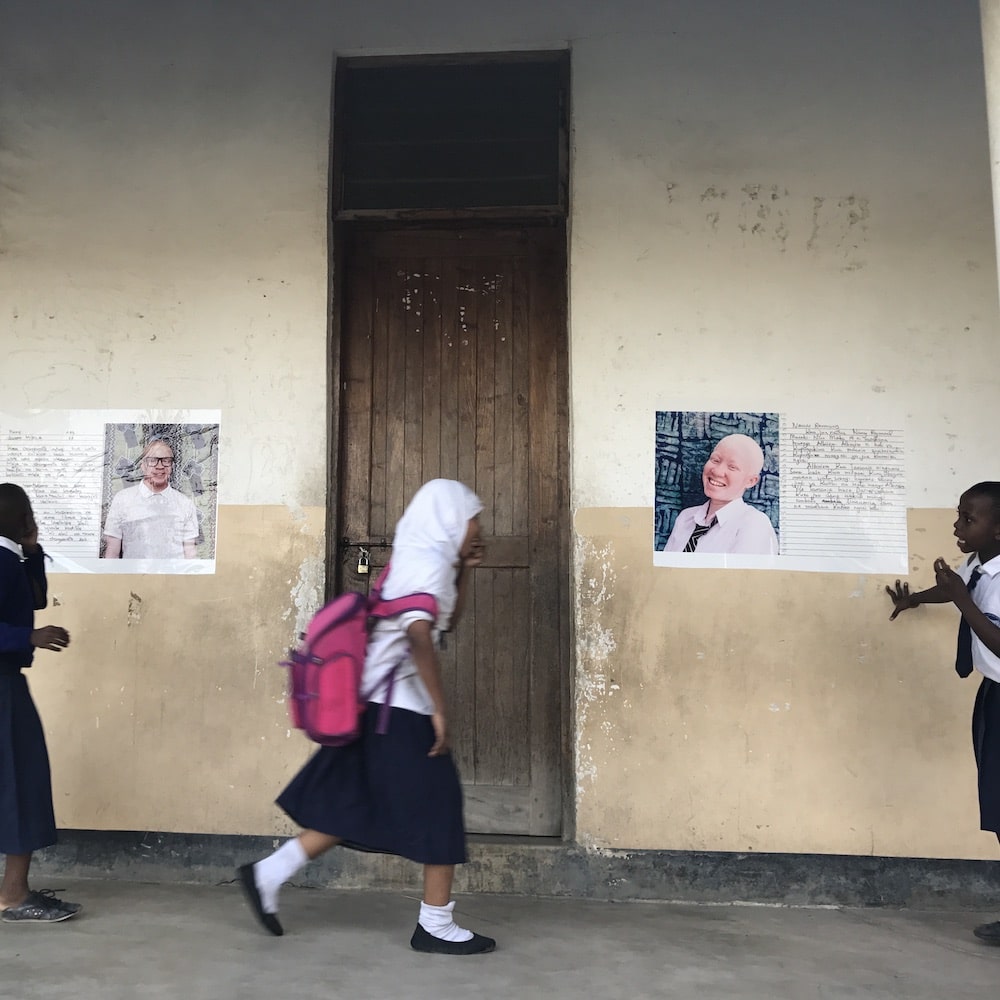 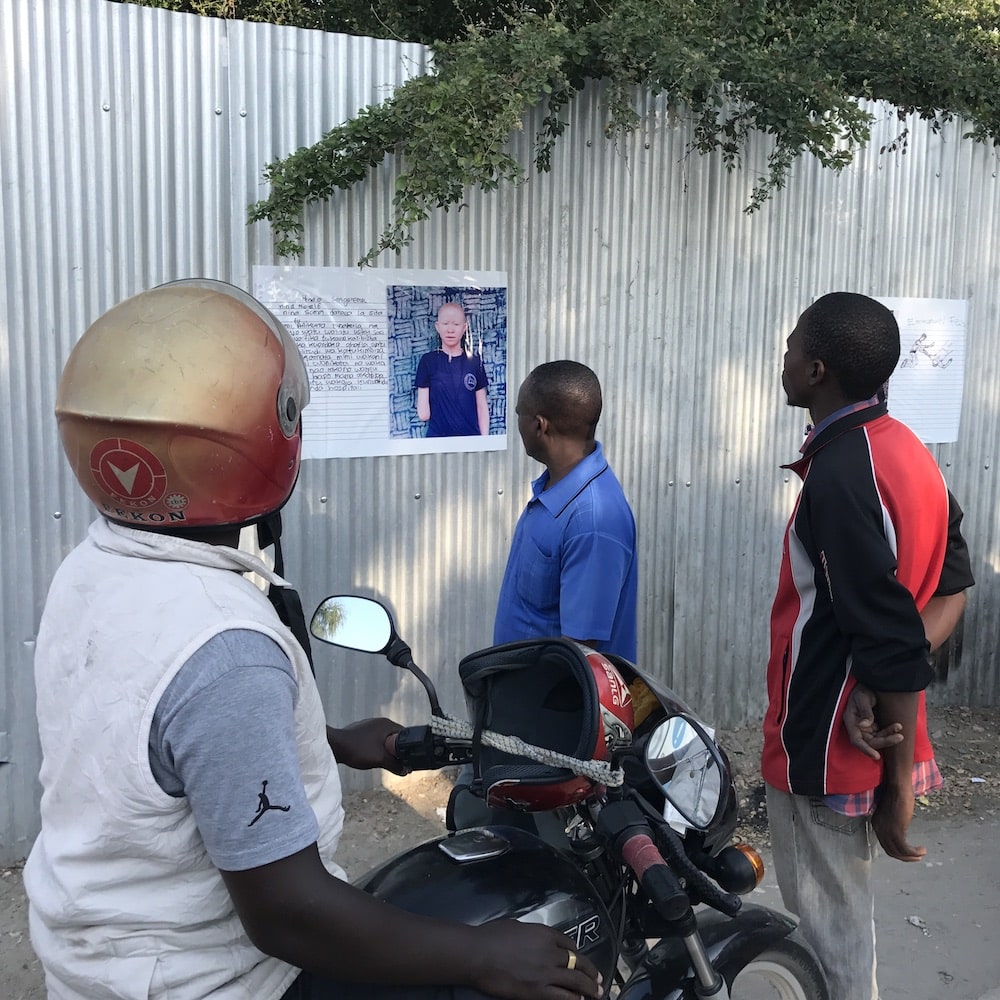 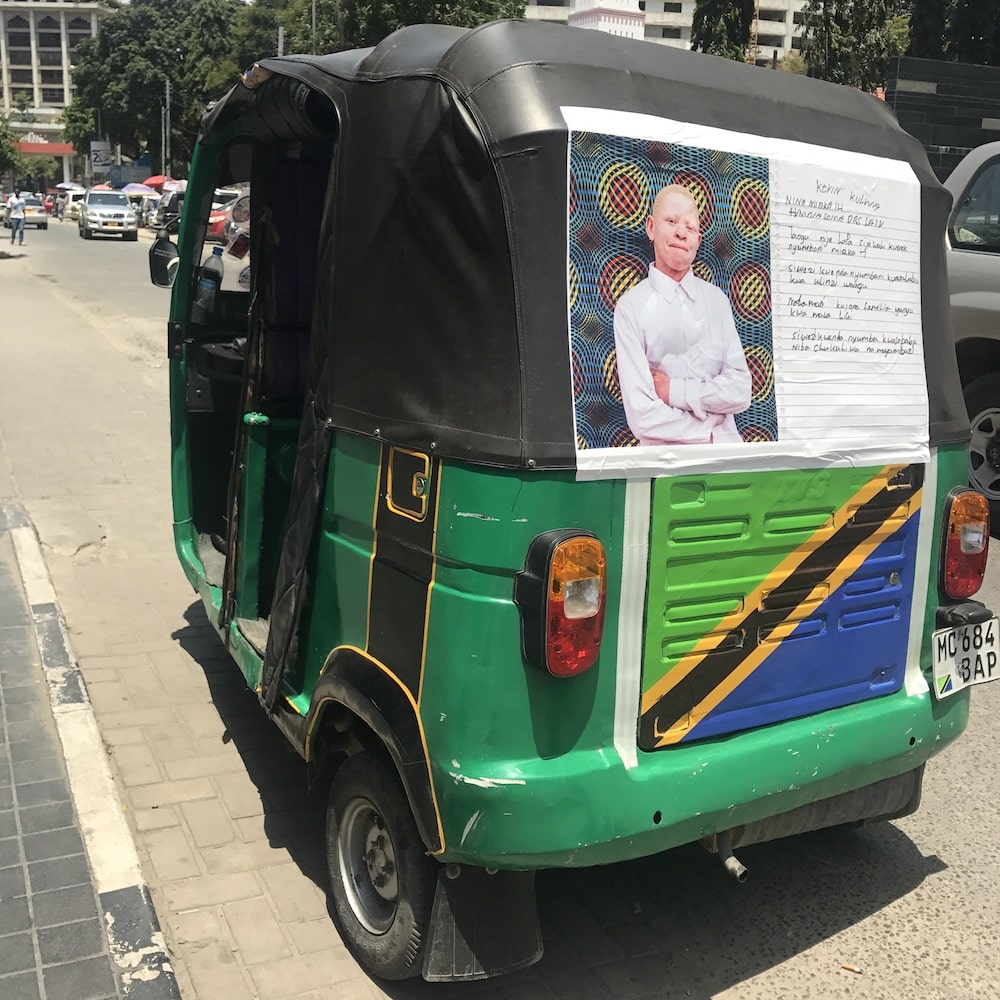 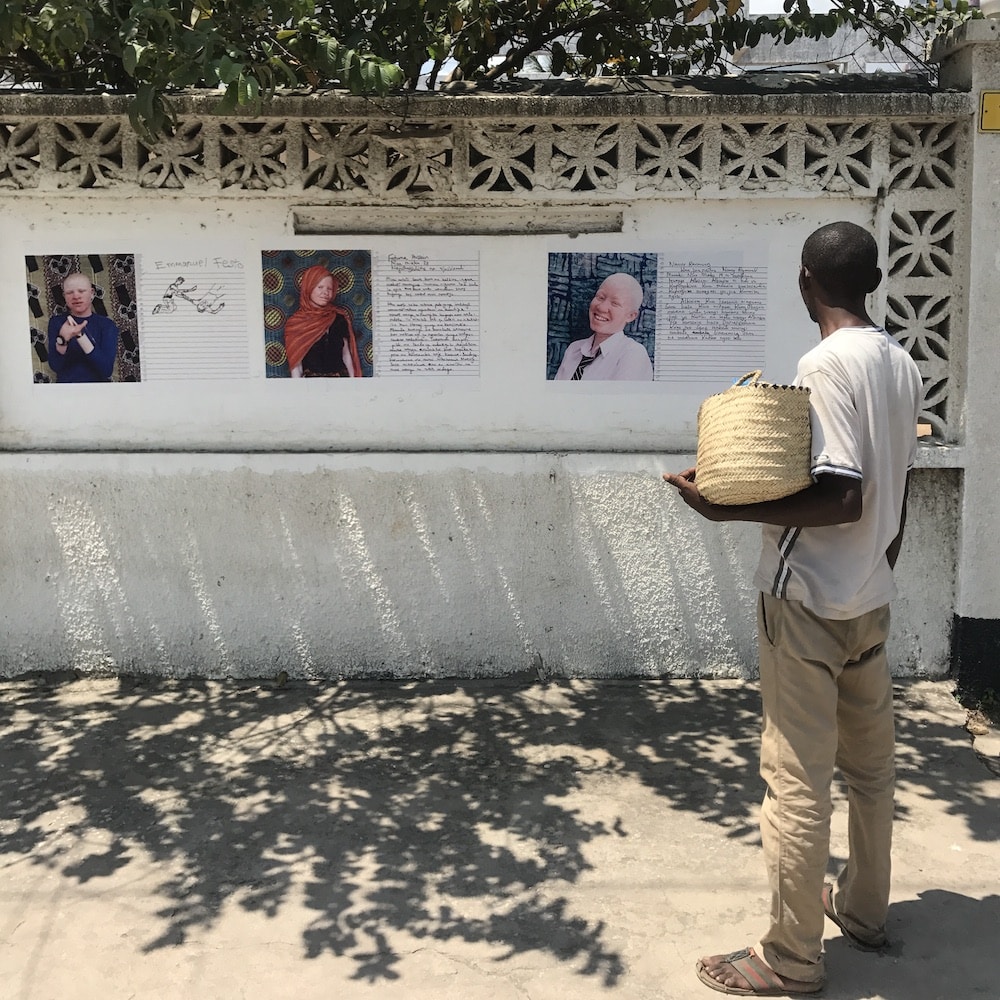 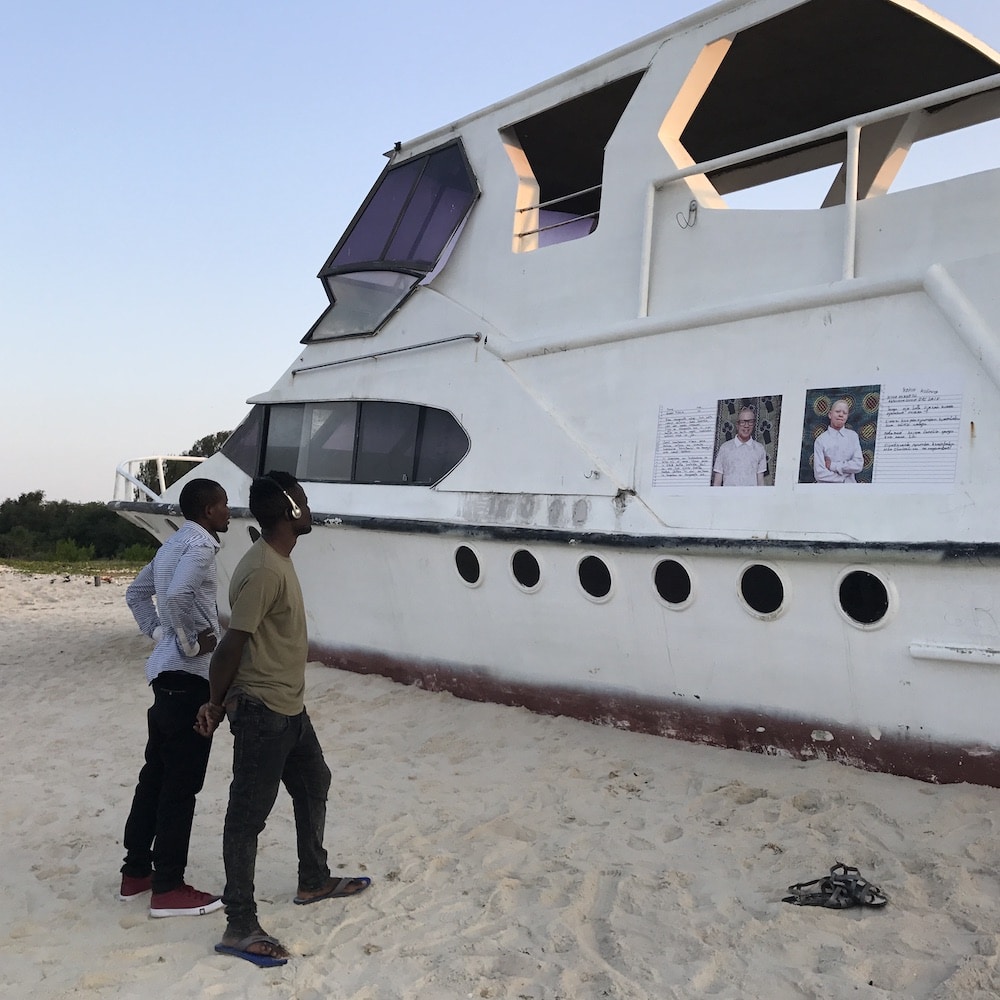