Rowan Jacobsen is the author of A Geography of Oysters,Fruitless Fall, The Living Shore, American Terroir, Shadows on the Gulf, and Apples of Uncommon Character

. He has written for the New York Times, Harper’s, Outside, Mother Jones, Orion, The Boston Globe, and others, and his work has been anthologized in The Best American Science & Nature Writing and Best Food Writing collections. He has won a couple of James Beard Awards, an IACP award, and some others. His Outside Magazine piece “Heart of Dark Chocolate”received the Lowell Thomas Award from the Society of American Travel Writers for best adventure story of the year, and his Harper’s piece “The Homeless Herd” was named best magazine piece of the year by the Overseas Press Club. He was a 2012 Alicia Patterson Foundation fellow, writing about endangered diversity on the borderlands between India, Myanmar, and China, and is a 2015 McGraw Center for Business Journalism Fellow, writing about the disruptive potential of plant-based proteins. Apples of Uncommon Character

was named to the Best Books of 2014 lists by the Washington Post, Wall Street Journal, Boston Globe, NPR, and others. 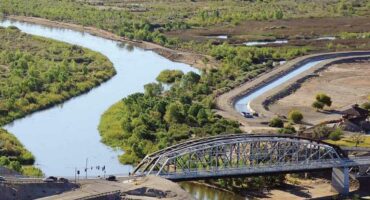 Down by the River

ALTHOUGH YOU WOULDN’T have known it as recently as ten years ago, the Sonoran Desert city of Yuma, Arizona, is a river town. Located near the junction of California, Arizona, and Mexico, this kiln-dry city of ninety thousand people and 3 billion heads of lettuce has always owed its existence to the Colorado River. Continue reading →

From Farm to Table

I STEPPED INTO a dusty barn in rural Vermont and shook hands with Peter Roscini Colman, who pulled up a trapdoor and led me down to the barn’s dark basement. I Continue reading →