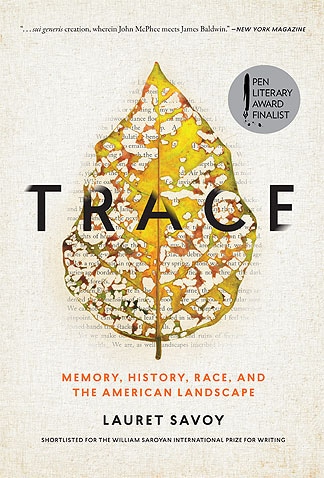 Sand and stone are Earth’s fragmented memory. Each of us, too, is a landscape inscribed by memory and loss. One life-defining lesson Lauret Savoy learned as a young girl was this: the American land did not hate. As an educator and Earth historian, she has tracked the continent’s past from the relics of deep time; but the paths of ancestors toward her–paths of free and enslaved Africans, colonists from Europe, and peoples indigenous to this land–lie largely eroded and lost.

In this provocative and powerful mosaic of personal journeys and historical inquiry across a continent and time, Savoy explores how the country’s still unfolding history, and ideas of “race,” have marked her and the land. From twisted terrain within the San Andreas Fault zone to a South Carolina plantation, from national parks to burial grounds, from “Indian Territory” and the U.S.-Mexico Border to the U.S. capital, Trace grapples with a searing national history to reveal the often unvoiced presence of the past.

In distinctive and illuminating prose that is attentive to the rhythms of language and landscapes, she weaves together human stories of migration, silence, and displacement, as epic as the continent they survey, with uplifted mountains, braided streams, and eroded canyons. Gifted with this manifold vision, and graced by a scientific and lyrical diligence, she delves through fragmented histories — natural, personal, cultural — to find shadowy outlines of other stories of place in America.

“Every landscape is an accumulation,” reads one epigraph. “Life must be lived amidst that which was made before.” Courageously and masterfully, Lauret Savoy does so in this beautiful book: she lives there, making sense of this land and its troubled past, reconciling what it means to inhabit terrains of memory–and to be one.

Kathryn Aalto is an American historian, designer, teacher, speaker, and New York Times best-selling author living in England. For the past twenty-five years, her creative practice has fused nature and culture: teaching the literature of nature and place; designing artful and sustainable gardens; and writing about the natural world. She travels widely as a keynote speaker throughout North America and Britain. Kathryn is the author of three books including The New York Times bestseller, The Natural World of Winnie-the-Pooh: A Walk Through the Forest that Inspired the Hundred Acre Wood (2015) and Nature and Human Intervention (2011). Her third book is Writing Wild: Women Poets, Ramblers, and Mavericks Women Who Shape How We See the Natural World (2020). This book explores the lives, landscapes, and literature of 25 classic, new, and overlooked female nature writers. Her essays have appeared in Smithsonian Magazine, Outside, Sierra, Buzzfeed, Resurgence and the Ecologist, and more. Her work has been widely reviewed including by NPR’s “All Things Considered,” The Wall Street Journal, The Washington Post, and People as a “Best New Book Pick.”  More at www.kathrynaalto.com. Instagram and Twitter @kathrynaalto.

Marissa Landrigan is the author of The Vegetarian’s Guide to Eating Meat (Greystone Books, 2017), a memoir chronicling her journey from vegetarian to ethical omnivore. Her creative nonfiction has appeared in numerous journals, including The Atlantic, Orion, Creative Nonfiction, Guernica, and elsewhere. She holds an MFA in Creative Writing & Environment from Iowa State University, and is currently an Associate Professor at the University of Pittsburgh at Johnstown, where she teaches creative, digital, and professional writing.

Meera Subramanian is an award-winning journalist who has explored the disappearance of India’s vultures, questioned the “Good Anthropocene,” and investigated perceptions of climate change among conservative Americans. She is a contributing editor of Orion, and former MIT Knight Science Journalism fellow and Currie C. and Thomas A. Barron Visiting Professor in the Environment and the Humanities at Princeton University. Her narrative nonfiction book, A River Runs Again: India’s Natural World in Crisis, was a 2016 Orion Book Award finalist. You can find her at www.meerasub.org.