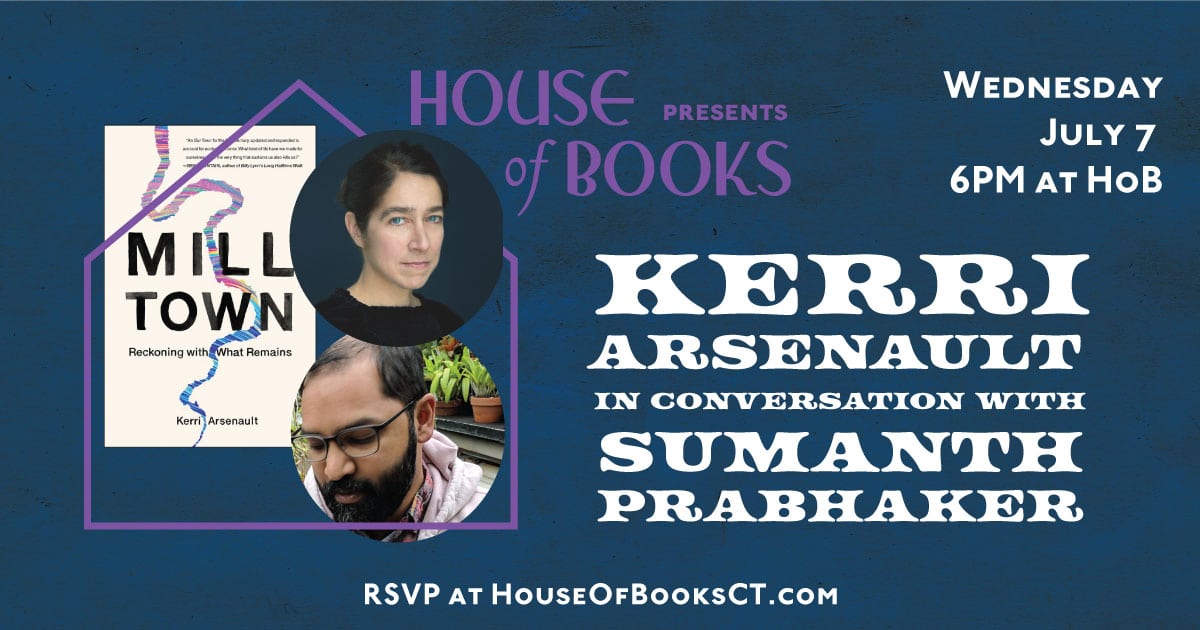 Join us IN PERSON for an engaging conversation with the critically acclaimed author of MILL TOWN.

“In searching for her Acadian roots, Kerri returns to Mexico, Maine and remembers the pleasures of her childhood. With adult eyes she sees the main employer in town, the mill, and its disregard for environmental standards and the age-old canker sore of greed before responsibility. Maine has the highest incidence of cancer in the United States. This is a poignant and yet disturbing reflection on what is happening not only in Maine but across the country where large, industrial complexes ignore laws for profit. Kerri Arsenault narrates this book and her voice envelopes her words in smooth, clear tones adding a dimension that lifted me off the page and into Mexico, Maine.” —Mary

“A powerful, blistering, devastating book. Kerri Arsenault is both a graceful writer and a grieving daughter in search of answers and ultimately, justice.” —Dani Shapiro, author of Inheritance

Kerri Arsenault grew up in the rural working class town of Mexico, Maine. For over 100 years the community orbited around a paper mill that employs most townspeople, including three generations of Arsenault’s own family. Years after she moved away, Arsenault realized the price she paid for her seemingly secure childhood. The mill, while providing livelihoods for nearly everyone, also contributed to the destruction of the environment and the decline of the town’s economic, physical, and emotional health in a slow-moving catastrophe, earning the area the nickname “Cancer Valley.”

Mill Town is a personal investigation, where Arsenault sifts through historical archives and scientific reports, talks to family and neighbors, and examines her own childhood to illuminate the rise and collapse of the working-class, the hazards of loving and leaving home, and the ambiguous nature of toxins and disease. Mill Town is a moral wake-up call that asks, Whose lives are we willing to sacrifice for our own survival?

KERRI ARSENAULT is book critic, book editor at Orion magazine, contributing editor at The Literary Hub, and author of Mill Town: Reckoning with What Remains, which was a finalist for the National Book Critics Circle Leonard Prize and the Maine Literary Awards. My work has appeared in Freeman’s, the Boston Globe, Down East, the Paris Review Daily, the New York Review of Books, Air Mail, and the Washington Post.

SUMANTH PRABHAKER is the editor of the environmental magazine Orion. On the side, he runs the operations of Madras Press, a charitable publisher whose catalog includes work by Lydia Davis, Ben Marcus, and David Foster Wallace. He received an MFA from the University of North Carolina Wilmington, where he was an editor for Ecotone. He lives with his wife and children in western Massachusetts.