Our Spring 2019 issue featured a hair-raising article, “The Edge of the Stand,” about following—or being followed by—a hungry grizzly bear at the edge of a Montana cornfield. This complicated relationship between predators and people rests at the core of the piece, excerpted from Down from the Mountain: The Life and Death of a Grizzly Bear (Houghton Mifflin Harcourt, 2019) by Bryce Andrews.

We caught up with Andrews to learn more about his work in Montana and the lessons embedded in these edge zones, pairing people and carnivores, domesticated and wild, settled and indigenous. Included is a short film, “Corn Bears,” courtesy of the nonprofit People and Carnivores.

NT: Say I’m new to your book, your work with People and Carnivores, and to Western Montana. Tell me, in three sentences, what Down from the Mountain is all about.

BA: Down from the Mountain is about a grizzly bear’s life and death, and how farmers collide and coexist with large carnivores in Montana’s Mission Valley. It’s a simple story that opens onto larger challenges—issues like climate change and the subdivision of rural land. It’s about the urgency of our present moment and the hard work necessary to help grizzlies thrive in the crowded landscape of today’s West.

NT: What’s been your scariest encounter with a grizzly bear?

BA: Given the amount of time I’ve spent recreating and working in grizzly country, I’ve been very fortunate when it comes to bear encounters. I’ve seen and been near a lot of grizzlies, and have been impressed by their restraint. For the most part, bears treat us very well.

My scariest encounter was near Yellowstone National Park. I was gathering cattle for a ranch where I worked, and ended up finding a steer that had either been killed or scavenged by a grizzly. The carcass had been partially buried in a grove of thick timber, and as I got off my horse and went to remove its ear tags, I realized the bear was nearby. I never saw that grizzly, just heard it breaking brush.

NT: When chronicling these grizzlies and their lust for sweet corn, a word kept surfacing for me: diabetes. What are some major health concerns for wild animals as they begin to consume disproportionate amounts of calories from corn and other human foods, as their communities are brought ever closer to ours?

BA: That’s a good question for a biologist to weigh in on, but I can speak to what I’ve seen in the field. Corn and other similarly plentiful, starchy crops do the same things to bears that they do to us when we eat them in excess. Cornfield bears end up obese—sometimes to the point where they struggle to run. Their teeth tend to fail and decay at a faster rate than bears using natural food sources.

Bears feeding on agricultural crops are also exposed to pesticides and herbicides—to substances like glyphosate. As our farming practices grow increasingly reliant on chemicals, as in the case of corn that has been genetically modified to resist herbicide, wild animals will encounter and ingest whatever substances we spray or spread on our fields.

NT: Down from the Mountain takes place on the Flathead Reservation in Western Montana. What are some traditional mythologies surrounding the grizzly bear? How are they expressed by tribal members in response to these animals today?

BA: While I’d recommend talking with a Salish, Kootenai, or Pend d’Orielle person about grizzlies in tribal mythology and culture, one thing is obvious even to an outsider like me: The tribes of the Flathead Reservation care deeply about their bears. The tribal government has protected grizzlies with impressive consistency and diligence. As grizzlies spread south and move from their current core habitat, we should all thank the tribes for their good work and management.

A significant portion of the Mission Mountains Tribal Wilderness is reserved for grizzly conservation, with all human entry prohibited in key seasons. That restriction is a rare one, and it’s hard for me to imagine a state government or national forest taking a similar position. Banning human entry to key habitat is a bold step, and one worth considering in essential places. What I’m saying is that the rest of us can learn a few things from the tribes about living with grizzlies. 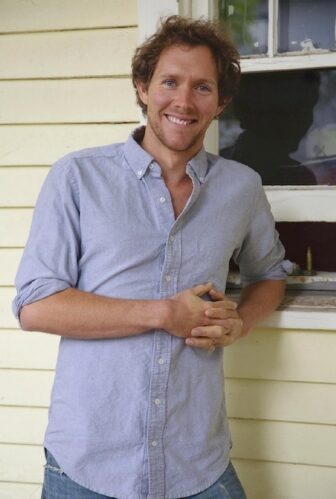 NT: Your relationship to modernity, to technology, gadgets, and urban atrophy seem to be a central tension in the book. Drones, for example, were a tool you learned to use for monitoring grizzly bear movements. How do you view these technologies now?

BA: Drones and other technologies are useful in my work because they allow us to see into the lives of animals. What we learn from a bird’s-eye view, or from data uploaded by GPS collars can help us avoid conflict with other species. If we know where a bear dens, or how it tends to cross a highway, we’ve got a better chance of keeping that animal and others alive and out of trouble.

A rancher once said to me of his rifle: “It’s a tool, like any other.” The same thing applies to the technologies we’re discussing here. Drones, like chainsaws or guns, don’t have a bias toward good or evil. Whether we use them well or poorly comes down to our own judgment and restraint.

NT: Why is it important for humans to live among predators? Not everyone can (or would like to) live in such intimate contact with resident grizzlies. What are some takeaway lessons you might share from your time living and working in grizzly country?

BA: Grizzlies are an essential part of a complex whole, as pistons are necessary to an engine. That’s well established and proven, but I want to touch on something more immediate, emotional, and selfish. Here’s something I wrote in the book:

“There is something about grizzlies that fascinates and pulls at everyone who encounters them. Half of it is their odd mix of bulk and grace. A healthy bear is a walking paradox — a heavy, seemingly ungainly creature that can turn swift and lithe in a moment. Near Yellowstone, I have seen a boar running faster than a sprinting horse can, stretching out and loping across an open meadow. Coming to a stand of brush, that bear stopped short. Losing all evidence of strength and speed, he went lumpish and shambled from sight. The phase shift was as complete and unlikely as water flashing to steam, and I never forgot it.

Then there are the eyes, which are not unlike ours in shape, size, and distance from each other. A bear’s eyes—small in their wide heads—seem made for looking back, for focusing on and assessing us. When grizzlies are not afraid or raging, there is something tranquil, sympathetic, and even shy about their eyes.

When a human meets a bear, their gazes join like halves of a split stone. A charged arc is struck between two creatures, and the rest of the world disappears in the glare. That fire is treacherous and tends toward destruction. It also contains a measure of recognition.

Nobody can say what a grizzly makes of that moment, but I know what it means to me. Looking bears in the face—an experience as consuming as falling—has given me a better grasp of what I am and how I fit into a wild older world.”

Here’s the heart of it: I want to share these mountains with grizzlies because they remind us that human beings once lived in a community that exceeded our species. When I am alone and I encounter a grizzly, I am always humbled by its power. When the bear does not eat me, I’m left feeling grateful. Those emotions—humility, gratitude, and even fear—are good things for a human being.

NT: Would you say there is a sense of wildness removed, even from free-roaming animals, when their habitats are becoming snuffed out, increasingly limited, managed, and fenced over time?

BA: Yes. When grizzlies learn to feed on corn, their lives become simple and more sedentary. Instead of climbing peaks in search of insect colonies, an important late-summer food, they stay low in the valley. Instead of stitching together a complex, varied seasonal feeding ground, they focus on our activities and begin to live more closely with us. Much is lost in this transition, which amounts to a form of domestication.

NT: Near the end of the book you find yourself in a zoo with captive grizzly cubs. I enjoyed how you rendered this tension—sure, they’re survivors, but is there any remnant dignity in such a spectacle, placed into a life encaged, domestic, controlled?

I can’t say whether a life in captivity—even with dedicated care, which the cubs certainly have—is better than death for a wild thing. I looked for a long time at those two cubs, and still don’t know what I would have done if their fate had been left to me. I do know what’s better for us, though. It’s better for us to have those cubs alive, because they’re doing us and the rest of their species a service. People visiting that zoo have a chance to connect with wild animals. That sort of connection is too rare these days, particularly in cities. Some people who see those grizzlies and learn their story will be moved to action. That, in any case, is my hope.

More Resources:
Learn more about People and Carnivores.
Purchase this back issue.
Subscribe to Orion. New subscribers receive one year for only $29.