The only job description that fully fit with Richard Nelson’s (“Nels”) temperament and enormous skill set was that of being in exuberant contact with the wild world. All other job descriptions imposed on him by institutions or scholarly disciplines were side issues, or at best, springboards for getting him into the wilderness: as an ethnographer studying survival on sea ice; a field anthropologist investigating subsistence hunting; an ethnozoologist documenting traditional knowledge and values of Athapaskan fishers, foragers, and hunters; a videographer; an award-winning nature writer; a wilderness conservationist; an aural ecologist of soundscapes and radio producer.

Over the wayward arc of Nels mastering one art or science after another, he would shed one label after another, simply to get closer and closer to the wild source at the heart of this precious world.

None of these taglines encompasses who Nels really was or what ultimately motivated him. From an early age, he was captivated by the wonder of the natural world. As a young man, he was trained by First Nations peoples in the disciplines of seeing and hearing every subtle signal of health or disruption that could be found in his surroundings. He was mentored not just in traditional knowledge, but in millennia-old traditions of treating the bounty of nature as a sacred gift. And yet, his lifelong deepening of seeing wild nature as the ultimate home of the sacred did nothing to constrain his outrageous sense of humor and unabashed joy of being immersed in the world of ravens, salmon, bears, and wolves with his closet friends and neighbors. It was his mandate.

For those of us who watched as Nels morphed to more fully follow his passions, it is easy to forget just how accomplished he was in any task or discipline he took on. He was an expert naturalist from an early age, but also a rigorous scholar of both anthropology and biology. And yet, few of his fishing and hunting companions ever knew (or cared) about his academic credentials from the University of Wisconsin, University of California, and time teaching in a variety of colleges. They were more in awe of his navigation savvy in the troubled waters of Sitka Sound, his stalking, hunting, and butchering skills related to his own pursuit of subsistence based on large game. Nels had an ear and a memory for birdsong on par with some of the greatest ornithologists I’ve ever met, from Ted Parker to Steven Hopp. But Nels used this talent not simply to add more species to his life list, but to understand the dynamics of wildlife communities and the communication networks among their members.

Once, not far from the edge of the Grand Canyon, I brought Nels together with Southwestern aural ecologist Jack Loeffler to celebrate an evening of their three decades of recording natural sounds around the world. We dimmed the lights and simply let them take turns playing their recordings of some of the most heartbreakingly beautiful soundscapes on this planet, then interpreting what we heard. The audience was not merely in awe of the gorgeousness of the sounds themselves, but, rather, what Nels and Jack could hear that we could not. 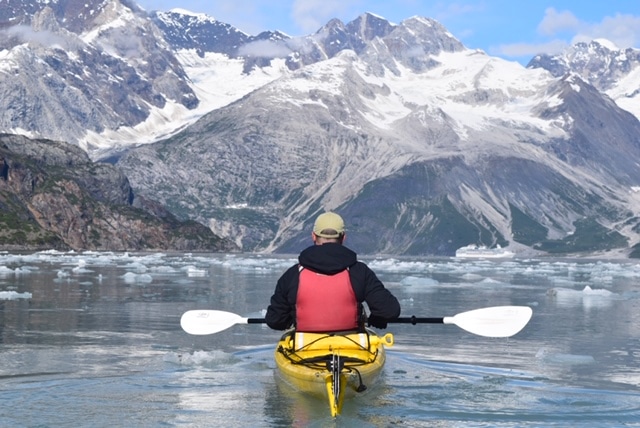 For all my grief over knowing that he has now flown away to sing more prayers with other ravens, I feel blessed to have spent part of three days with Nels and his partner Debbie during the last month of his life as a human. They previewed for me the film, Singing Planet, that they had been working on with their colleagues Liz and Hank—a masterwork that I hope all of you will be able to see in the future. And yet, we spent most of our time together simply listening to the symphony of sounds around San Francisco Bay—each change of wind direction, each bird, each rusting bow of redwoods nearby. Nels was fully present and attentive—just like his beloved huskies used to be—to every melody and harmony that enveloped him.

We will continue to be inspired by Richard Nelson—his elegant and exuberant life—more than we will miss him, because he is still thrumming in the very air that we breathe.