MY AUNT LOU told me once that it is easier for our people to believe in magic than it is for others.

As soon as she said it, I knew it was true.

I knew because that day she’d taken my sister and me, plus two of our cousins, to a beach on the northern coast of the island where the sand is shaped like stars.

We got lost in those stars.

We bent over their tiny bodies for hours, inspecting them as closely as we could without a magnifying glass, wishing we had one, even if only one, even if it meant we had to share.

We made starcastles. We cartwheeled over constellations. We ran around and fell down on a blanket of stars. We took turns burying each other in a beautiful graveyard of celestial bodies.

My aunt’s husband—a white man from Australia—explained later that they weren’t stars at all but rather foraminifera—tiny single-celled creatures who live at the bottom of the sea, whose exoskeletons wash ashore when they die. Foram sands, he said.

He was right, of course, but my aunt was more right.

Because eyes wide with wonder is a perfectly good definition of magic.

Because magic could just as easily mean stargazing, in the midday sun, while looking down.

Because we had so little, yet somehow, we had it all. 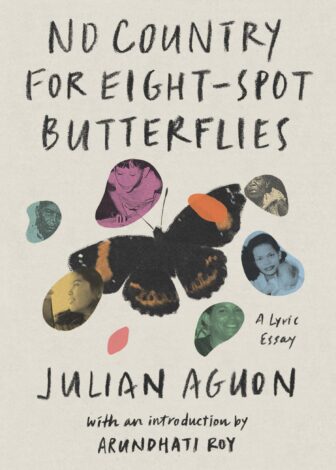 Excerpted from No Country for Eight-Spot Butterflies by Julian Aguon. Published by Astra House. Copyright © Julian Aguon 2022. All rights reserved.

Purchase your copy of No Country for Eight-Spot Butterflies here.