The winner of this year’s Orion Book Award, in the fiction category, is Laline Paull’s The Bees (Ecco Press). Surprising, imaginative, and riveting, Paull’s ambitious novel, written from the perspective of a lowly worker bee, takes you deep into the hive in a gripping story that will leave you daydreaming about these creatures and their incredible lives.

The Bees, it’s safe to say, is one of the most imaginative books we’ve read all year. Where did the writing begin for you? It’s easy to imagine a bee buzzing near your writing space one morning, sparking your imagination…

I was primed to write; I’d written one unsuccessful novel (thereby clearing the semi-autobiographical effort out of the way) and had almost finished a six-month creative writing course—but I didn’t have a subject. And then I remembered how interested in bees I’d become, following the untimely death of a friend who kept them. She had died the previous year, and in an attempt to stay close to her in spirit, I had immediately following her death immersed myself in reading about them. I’d developed a collection of bee books, both biological and poetic, but I hadn’t any plan for them. I had just been reading with growing fascination, and also a sense that I might be—I don’t know—spending my time on something that had no purpose in my life.

Yet I was gripped by the drama of the secret life of the honeybee—the massacre of the males, the raising of rival princesses in their separate queen cells, decided by who knew which bees, and why? When I got bored to tears with the original idea I was trying to write about, I thought about the bees: the bees, the queen, the sterile workers who sublimate their libido in order to give reproductive privilege. I went back to the bee books, and read about the phenomenon of the laying worker. Even the most sober biologists referred to the laying worker and her sister bees—the sisters who hunt her down amidst their thousands—as “the fertility police.” And I had my territory, my mood, and my protagonist. 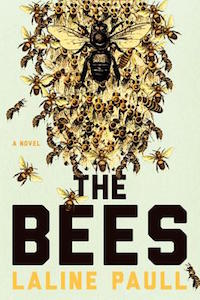 While a work of fiction, this book reflects what must have been a long and involved research process. The life of a bee and the social structure of a hive must have been topics you spent a long time thinking about. What did it take to research a book like this?

Once I knew I was writing this novel, I hired myself as the best research assistant I have never ever been, and pretended I was working for someone extremely important, for whom I must be diligent and brilliant. I would find out everything about honeybees, until the wall of higher math and statistics drove me back. I spent three months, at least, in full-time intensive research, both academic and field, and I have to say the world of bee biology is incredibly generous, as are beekeepers, with their knowledge (and their honey). I learned far more than I could find story to tell, but all of it fascinating.

Now, working on my second novel in the same garden shed in which I wrote The Bees, when I gaze out at the unkempt tangle I like to keep as my view, full of pollinator-friendly flowers, I see a huge variety of friends going about their business. Bees will always be totemic, magical, and precious to me. I think this is the way with the natural world, though—as you begin to notice, and respect, you begin to love and feel a responsibility to care for it.

The Orion Book Award is given to books that, among other things, “deepen the readers’ connection to the natural world.” But when you began writing this book, I’m sure your aim was simply to tell a good story. Now that the book is finished and out in the world, does the Award make you think about the book in a new way?

I am so very honored by this award, because the idea that my novel can do what the award describes is really wonderful to me. It means that I have managed to create something that not only entertains—and that was certainly my aim, to tell a good story and reward the precious time of the reader—but that can change the reader’s perception of the world, to the point where they might feel moved to join in the growing movement to protect nature.

I was moderately concerned about the environment and conservation before I wrote The Bees, but it’s impossible to stay neutral in the face of the facts. I have reclaimed that idealistic part of myself that somehow went underground for so long, and I intend to tell good stories for their own sake. Winning the Orion Book Award gives me hope that I might be able to twine these two strands again.

Read more about the Orion Book Award, including this year’s finalists, here.