Summer is not over and there is still time to add some stellar new poetry collections to your reading list. Orion poetry editor Camille Dungy and friends are back with new recommendations for poems on birds and bodies, cricket calls and whale falls, trees and grief and beehives and beholding. 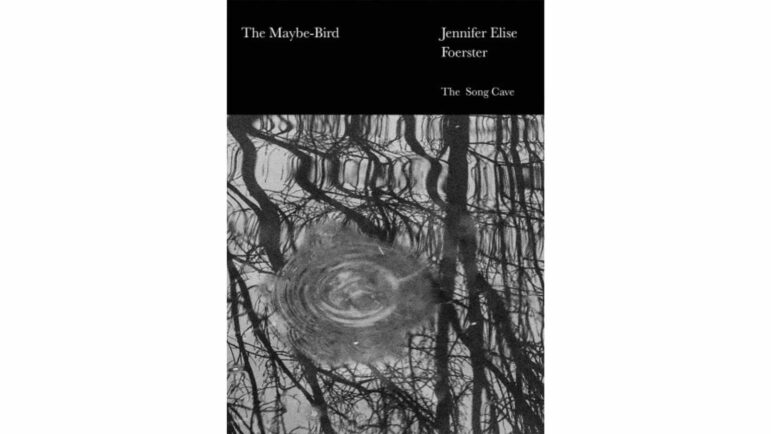 The Maybe-Bird by Jennifer Foerster

Blending myth, history, dance, song, landscape, and language, Jennifer Foerster’s newest collection reimagines how we can think of and speak of lives lived and living in the Southwest. “What art/should be assembled through such a scene,” she asks early on. The answer is both revealed and unravelled, lyric after lyric, in this book’s sequences of song, document, translation, and transmutation. The stories these poems tell are often harrowing, and just as often filled with honey, with bees and with flies and with forests and gardens and shells. A stunning collection. (Song Cave) 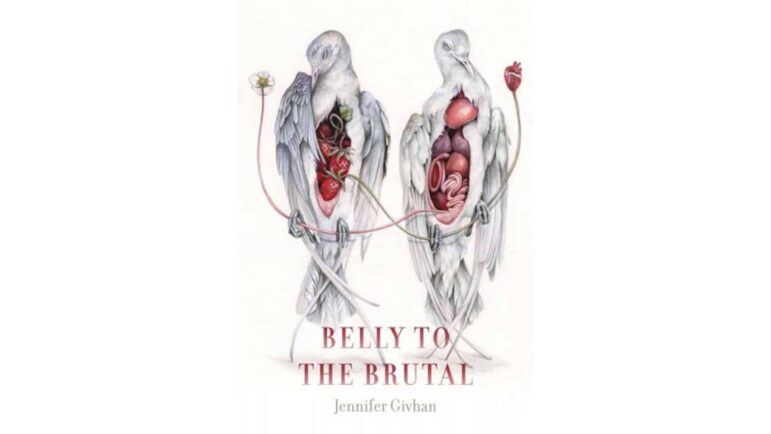 Belly to the Brutal by Jennifer Givhan

Thick with songs of hard-won triumph and everyday despair, Givhan’s Belly to the Brutal, casts spells that help the woman at its center ground herself in this world despite its many perils and disappointments. So grounded, she grows up, strong and marvelous as a watermelon. The living world offers lessons and miracles she adds to her survival kit and can pass along to her children, breaking cycles of violence and silence that would otherwise corrupt the vital growth the book celebrates. (Wesleyan University Press) 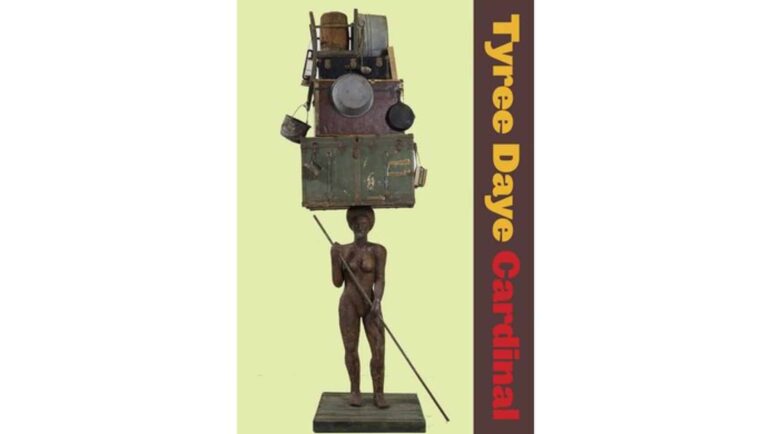 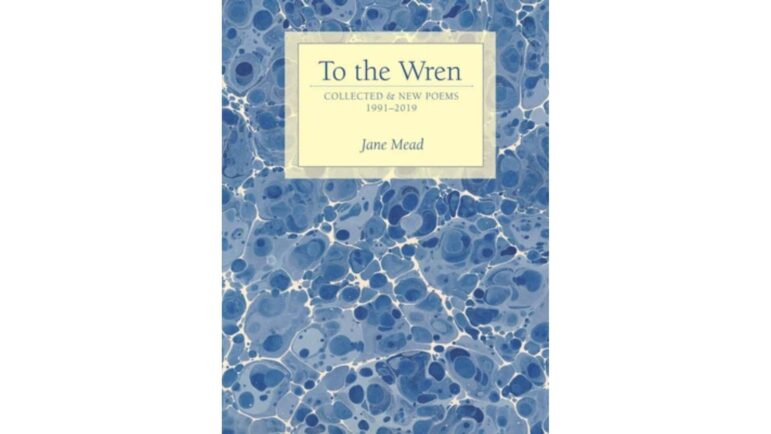 Jane Mead stands among the masters of late 20th and early 21st-century poetry. This 580-page book is a treasure. In his foreword to her first book, which is collected in To The Wren, Phillip Levine wrote: “in her poems, the natural world is bodied forth in its splendor and beauty and we live just on the brink of joining it…These poems are driven forward by the knowledge that we could hear the meaning of the world in all things, including ourselves, if only we were given the power to listen.” Jane Mead was a listener and a seer. Her lithe, bold poems are a testament to her attention, her insight, and her lusciously lyric ear. (Alice James Books) 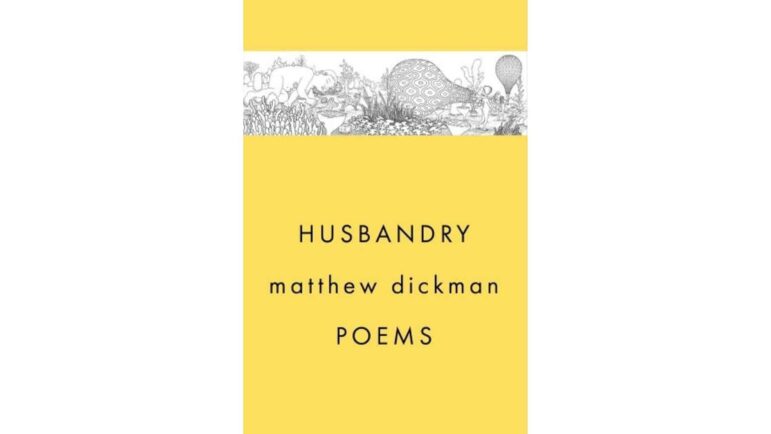 The greater than human world and the mundanely human are bound up in this book. Accomplices in horror and happiness. Dickman relays a dailiness examined so closely it often alters into something almost strange, like that bizarre moment you attend to the steps of an oft-repeated action and note, with anatomical, perhaps even scatological, precision, how wild and wonderful it is to be alive. (W.W. Norton) 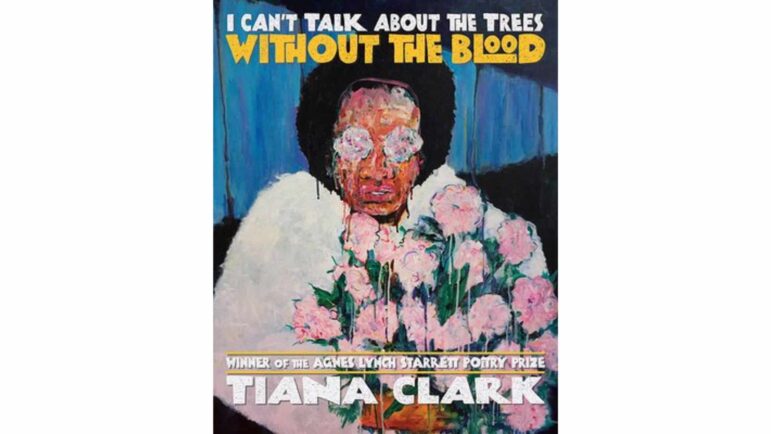 This book is a miracle like the play of light and shadow through the leaves of a magnolia tree can be a miracle. But that’s too easy. That’s too sweet and clean an image to describe this book. I Can’t Talk About The Trees Without The Blood is messy in all the best ways. It shakes up conventions of language and logic and anger and love. This book is grounded in the dirt of this nation, and what grows up from that dirt is by turns gorgeous and gruesome. Her expansive poems feel like curvy roads through the country. Conditions change from line to line. Page by page I can’t ever settle: “Is it cloudy or clear?” (University of Pittsburgh Press) 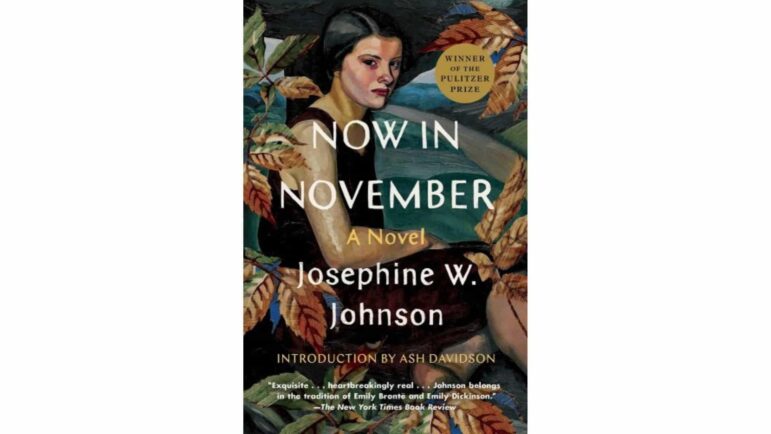 Now in November by Josephine Johnson

This isn’t a book of poetry. And yet I will include this commendation here. Josephine Johnson won the Pulitzer Prize for fiction in 1935 with this novel, and this summer Simon & Schuster rereleased Now in November, along with her nonfiction book Inland Island. Both books are works of a writer who has mastered the sound and feeling of the human voice. Johnson’s characters are beautifully drawn. She focused on the three young women at the book’s center with care and grace and honesty. I also appreciate the way she handled the story of the Black tenant family. So often, when reading books from that era, I have to brace myself for how they depict Black people, but Johnson’s descriptions of the family and of the way that the people around them spoke of and treated the family was as unflinching and honest as it was gracious. Most importantly, her writing refused the offensive stereotypes and biased dismissals that are all too common in white writing about Black lives. Her book should serve as a model. Particularly as a refutation for that overused excuse for the failure of certain writing because it was a product of its time. In her time, and even at her then-young age (Johnson was only twenty-five when she won the Pulitzer), Johnson knew how to treat all the people in her book with humanity, dignity, and equity of attention and care. Her descriptions of the landscape were equally stunning and often infused with a kind of attention to the greater-than-human world we now ascribe to eco-minded writing. And her analysis of the economic and social hardships faced by members of this farming community were consistently beautifully and brilliantly rendered. (Simon & Schuster) 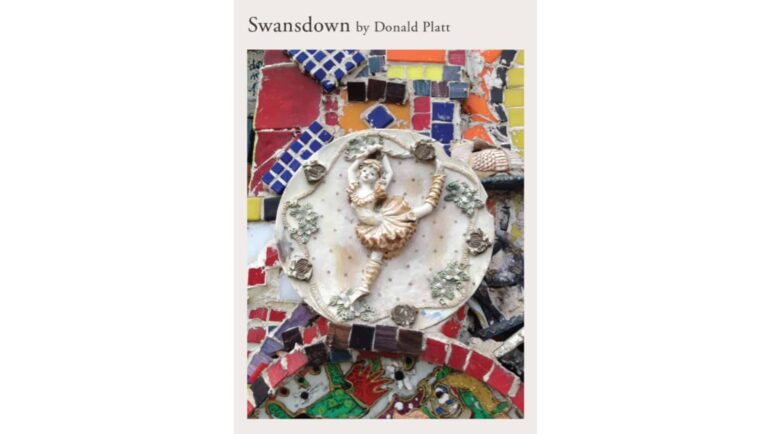 To say that Donald Platt’s new collection is about a man reckoning with the death of a family member would be like saying that Dr. Zhivago is about vodka. Swansdown has the sweep of a Russian novel. That kind of attention to detail (recurring descriptions of cloud formations, daffodils, bird flight, an evergreen and a maple whose leaves are turning to yellow-orange / fireworks, / eruptions of magma from the earth’s core”). And Platt digs into the deep heart of the people in his book, using his long wild lines and deepening meditations to push further and further into the typically closed crevices of the mind. Somehow, mind and body, earth and ether come together in these poems, so that by the end I understand more than I could have hoped to know before. (Grid Books) 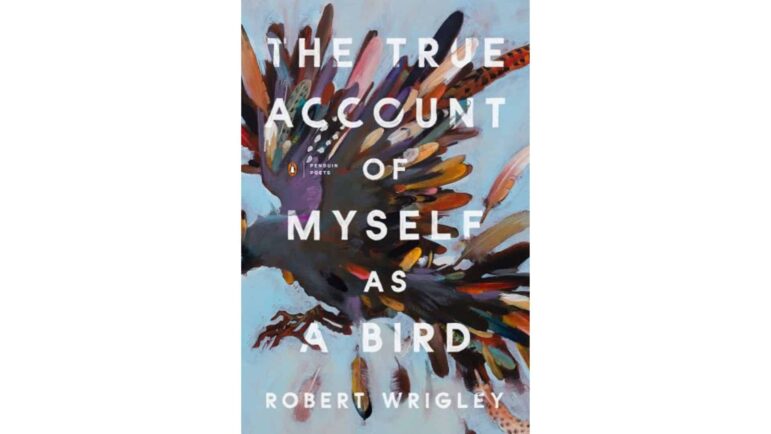 The True Account of Myself as a Bird by Robert Wrigley

Recommended by Joe Wilkins: In his twelfth collection, with poems playful and serious, employing free verse and traditional forms, Robert Wrigley insists across time, distance, and every chasm that we are, somehow, one another. What at this moment could be harder to say? What could ever be truer? And Wrigley means we in that widest, truest sense—butterflies, boulders, the nondescript neighbor also named Bob: all beings here are allowed their worth and meaning and song. The bird the poet is sings to the man he will be when he wakes. The man plucks a fish rib dropped by an eagle from his hair. At the edge of the woods, the doe thinks in “silent syllables made entirely of scent.” “[T]he wind says it is the wind,” and the melting snow “doesn’t know it’s rain.” (Penguin Books) 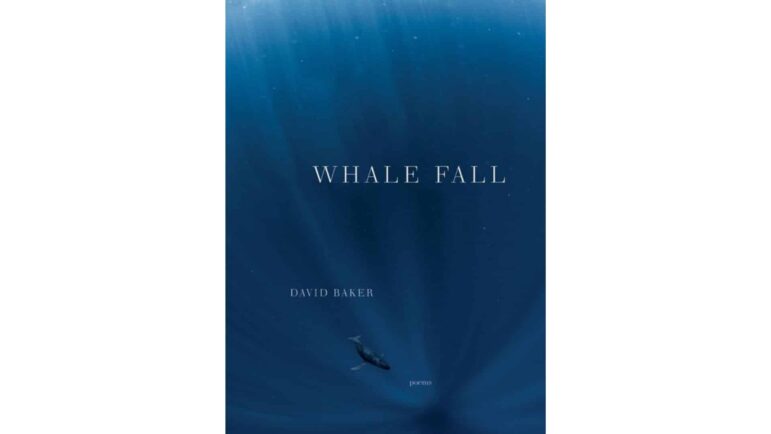 Recommended by Jill Bialosky: After reading David Baker’s new collection, Whale Fall, that thing happened so well described by Emily Dickinson—it took the top of my head off. The long title poem at its center is brilliant and as shimmering and mercurial as the ocean itself. Written in seven sections, it is both documentary and lyric, with a peerless eye for detail and precision; a tapestry of emotional intensity. We witness the phenomena of a whale fall juxtaposed to the speaker’s suffering from an auto-immune disease as a young father. A haunting exploration of death and decay, love, loss, and grief, as well as a volume that celebrates the natural world, even in its peril, Whale Fall is a mesmerizing performance. (W.W. Norton) 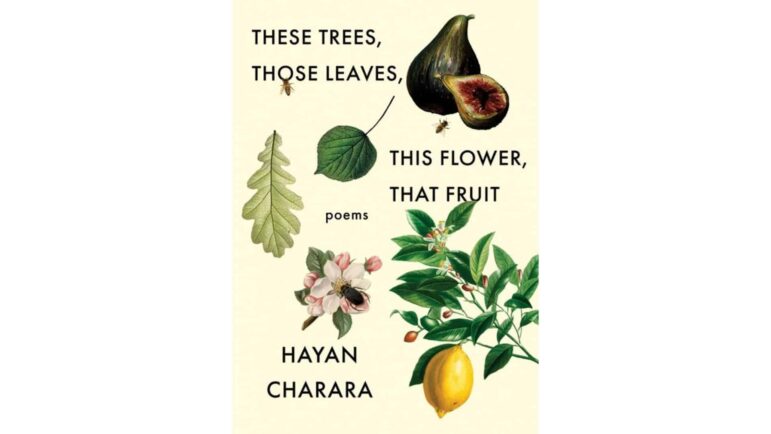 These Trees, Those Leaves, This Flower, That Fruit by Hayan Charara

Recommended by Lena Khalaf Tuffaha: “The trees alongside the fence / bear fruit. The limbs and leaves, speeches / to you and me promising to give the world back to itself” Hayan Charara’s poems declare. On every page, trees become an alphabet guiding the reader and anchoring them to the landscape. This is a virtuosic collection that showcases the poet’s formal skill and includes long poems of hard-won wisdom evoking Arab and Greek literary ancestors as well as acerbic haiku that capture scenes of modern life. Charara offers a distinctly Arab American ecopoetics; so many of the poems are rooted in the Detroit of his childhood, and look out onto the fragile world we inhabit, and that we unravel with our actions and language, our claims and our omissions. What the collapse of beehives portends lives alongside the violence of poetry prizes that reify national silence in a time of war.

“Which is holier ,/ the cathedral / burning / or the spiders under the pews?” asks the poet,

whose wit and wisdom are matched by his immense heart. (Milkweed Editions) 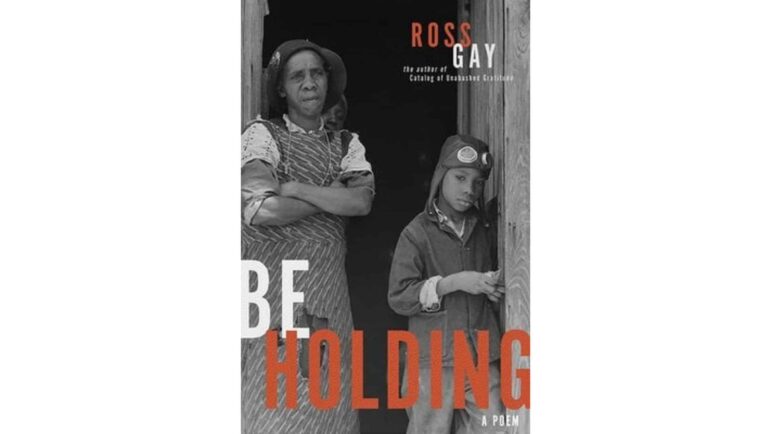 Be Holding by Ross Gay

Recommended by Leah Naomi Green: I marvel at Ross Gay’s presence with the reader in this book-length poem. Be Holding beholds its readers with care: it sees us, includes us, and lovingly dissolves our expectations of nature writing. The poem begins on a basketball court with Julius Erving’s famous layup (his “flight” as Gay calls it) in the 1980 NBA finals. It’s from this starting point that Gay guides the reader through mycorrhizal networks of time and action: instances in which people “with nowhere to go” have turned to flight. Gay moves through basketball courts, the Middle Passage, sharecropper fields and trees in the American South, personal family experiences, and representations of black bodies in visual art. This is a poem about the historical and ecological truth that “nothing happens only when it happens”.

“Do you know the mangrove” Gay writes, “do you know the mycelial ballet / who were human long before we were / and remained so / long after, / reaching to keep / from falling”. Be Holding forefronts the strength of interconnectedness, asking how, like mangroves, humans might reach toward one another to keep from falling. “How,” Gay asks, “might I be / holding your breathing / and you be / holding mine, / a practice / we talking about, / the reaching that makes / of falling flight.”

Gay’s “reaching” is toward the reader. In moments when the poem’s unpunctuated flow swells to intensity of violent fact, Gay parenthetically instructs the reader to breathe with him “(Breathe.) / (Breathe.)” as though to say: this subject is difficult, but we can bear it together. Together we can transform the violence with which we behold one another into breath. We can breathe with and for one another.

Gay’s bodily presence with the reader presents an alternative to traditional nature writing. He has not traveled to some inaccessible landscape to assert, via description, that we must see what he has seen exactly as he has seen it. In fact,  many of the written images in Be Holding Gay also include photographs, giving the reader visual access to share the experience of those images with him, to co-create them. He allows us to behold the images and their subjects directly, and so allows us to “be held” by them too. This is ecopoetry at its best; a radical emergence from nature writing, like the mayfly who floats on the carapace that had contained her. This is ecopoetry that reaches beyond human-made boundaries to bring every reader in: “we in here talking / about the reaching / that makes of falling flight”. “We,” Gay writes, using the universal genuinely, intimately, by necessity: “we in here talking about destroying the world / for the world”. (University of Pittsburgh Press)