MOST PEOPLE who find themselves in the Saiyon River Valley in Primorye, Russia, are not there for long. This is a quiet, often lonely place: a carpet of damp sedge grasses and loose collections of spindly larch, with water-loving poplars and elms that follow the river’s course like bashful toddlers clinging to a parent’s leg. In winter, the wind billows unimpeded from the nearby Sea of Japan, masking the nervous barks of roe deer and obscuring the snowy tracks of an occasional Amur tiger. Loggers or fishermen or hunters drive impatiently through this thinly forested swamp to reach better prospects. For Blakiston’s fish owls, however, the river is perfect.

Throughout most of its course, the Saiyon River alternates between shallow pools and shallower riffles, with clean water moving over smooth, barely submerged pebbles and parting around the occasional boulder. In a few spots, radon gas bubbles seep into the water, warming it slightly, enough for vast swaths of the river to remain unfrozen in all but the deepest winter colds.

Blakiston’s fish owls take full advantage of shallow, radon-warmed water at Saiyon. These endangered birds are the largest owls in the world, almost comically fluffy creatures that stand at two and a half feet tall, with a six-foot wingspan that can block the moon from those below. The owls prowl Primorye’s rivers for salmon. They wait in ambush along the riverbank for a fish to swim past, then leap, talons out and wings back, to pounce on their prize.

Although the river may be ideal for owls to hunt, the surrounding landscape is less suitable for nesting. Given their size, fish owls need enormous trees to nest in, typically poplars or elms with trunk diameters up to five feet across. Trees must be two or three hundred years old to reach such sizes. Such pickings are naturally slim in this swamp. 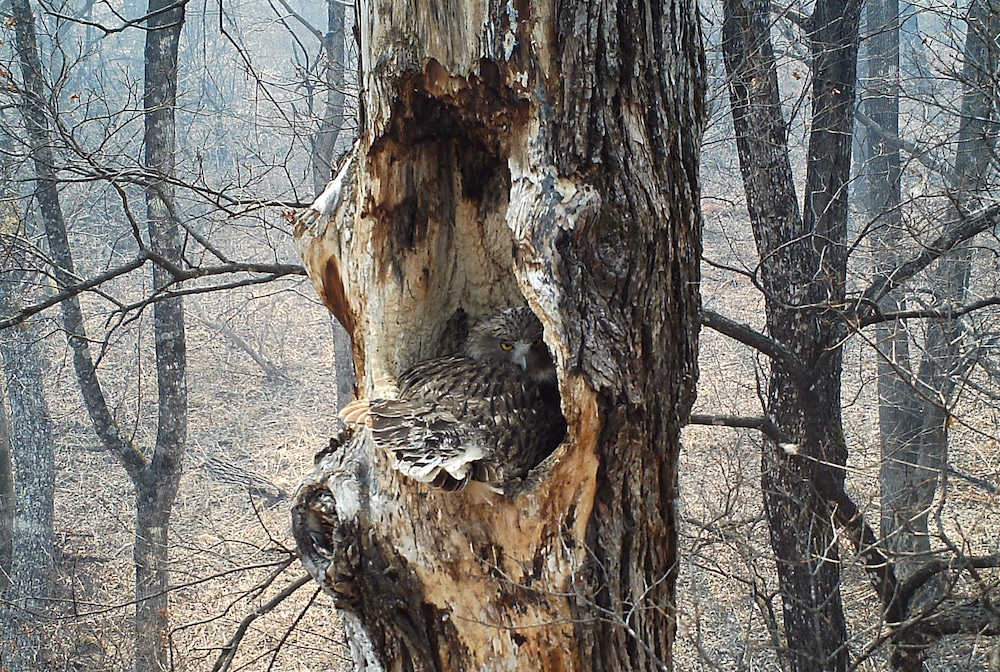 I’ve been coming to the Saiyon River Valley since 2006 to look for fish owls, mostly with Sergey Avdeyuk. An engineer in Soviet times and a field biologist since, Sergey found the first fish owl nest here in the late 1990s. By 2006, that nest was unusable by the resident owl pair: the walls of the enormous tree cavity had decayed and no longer offered any protection. After a brief search, we found the owls’ new nest tree about a kilometer upriver. By early 2007, that tree was gone too, felled during a summer typhoon.

We’ve checked in on the Saiyon fish owl pair almost every year since, watching with dismay as the owls moved from one suitable tree to the next, a total of four in a decade. Our research has shown that this is normal. Fish owls only use a nest tree for perhaps three or four years. The problem at Saiyon is that there are so few options to begin with. By 2014, all trees large enough to hold a fish owl nest were decayed, toppled by high winds, or cut down to repair a nearby bridge. The owls, territorial and with no intention of leaving, simply stopped breeding.

Across the adjacent sea, on Japan’s Hokkaido Island, fish owls nearly went extinct toward the end of the twentieth century. One of several reasons was lack of nest trees: poplars were targeted for harvest after the Second World War, and the systematic removal of those trees from the landscape left the fish owls with nowhere to nest. Once this was understood, Japanese researchers led by Sumio Yamamoto initiated an ambitious, decades-long scheme to erect nearly two hundred nest boxes around the island. This saved the owls from extinction there, and now 80 percent of the Hokkaido fish owls rely on nest boxes to breed. 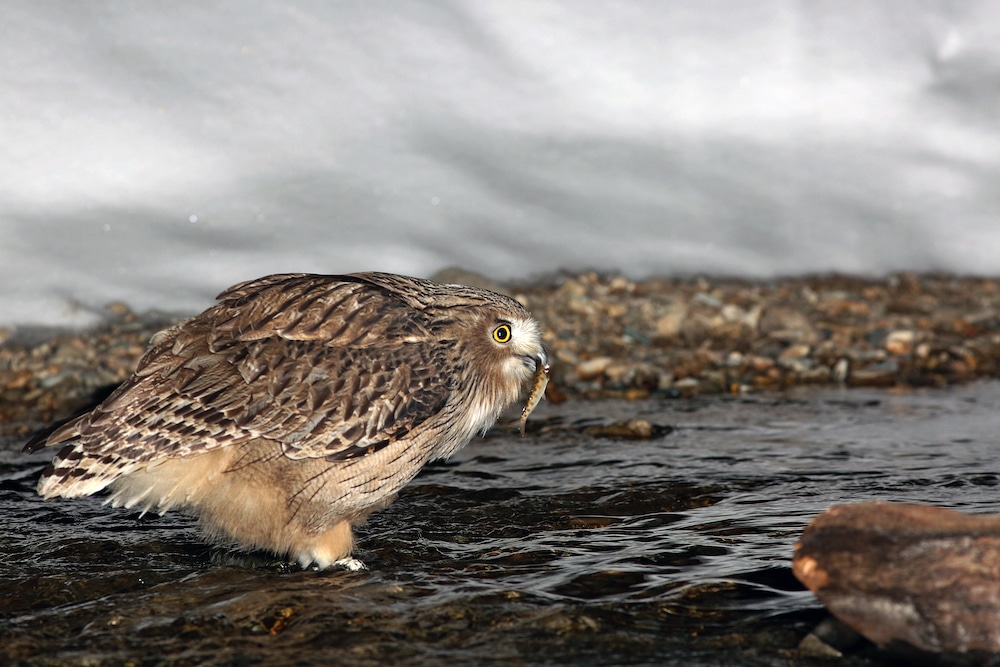 Taking cues from these successes along with consultation with Japanese fish owl researchers, Sergey and I quickly decided to do something about Saiyon. He found a fifty-five-gallon, blue plastic drum in his garage that had once held soybean oil. He cut a hole in the side, affixed a wooden perch to the base, and in 2015 we drove nine hours from his home to reach the remote Saiyon Valley. There, we hoisted this barrel nearly thirty feet up a tree along the riverbank, not far from an old nest. After securing the barrel to the trunk with cables, Sergey strapped a motion-sensing camera to a nearby branch to record when—or if—the fish owls would find our odd gift.

We were amazed to see photos of the owls investigating our nest box only days after we put it there. The following year, they bred. The Saiyon owls have now successfully raised at least four chicks in this sky-blue barrel. We slowly began erecting barrels in other places we thought fish owls might need them and, in 2019, we found more nesting in another barrel.

Wildlife conservation, like many professions, is filled with uncertainty. People in my field can spend their entire lives designing studies, collecting data, and using that information to guide conservation, but sometimes it is hard to know if our efforts have any real impact. This is because nature can take a long time to respond to management tweaks, and with so many uncontrollable factors it can be difficult to pinpoint why, exactly, some positive changes occurred. Was it because of our work or something else we did not account for?

This might explain why the nest box initiative is so deeply gratifying for me. Right now, as I write, fish owls are flapping around Primorye, perhaps landing on riverbanks or hooting to their mates. They have another chance to breed, bring life to the forests, and give hope for the future of an endangered species—because Sergey and I strapped barrels to trees.

Jonathan C. Slaght is the Russia and Northeast Asia coordinator for the Wildlife Conservation Society. His book, Owls of the Eastern Ice, was long-listed for the 2020 National Book Award for Nonfiction.